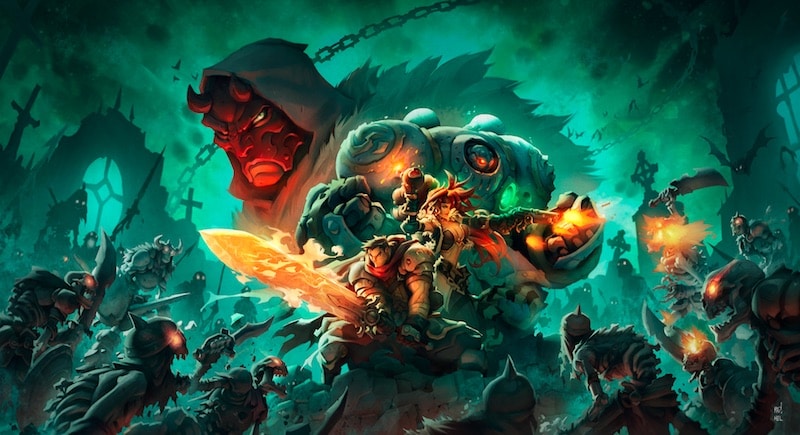 Battle Chasers: Nightwar is a role-playing game (RPG) based on the fantasy comic book series by the same name. It’s inspired by classics such as Final Fantasy and Chrono Trigger. The game is developed Airship Syndicate - a twelve person studio consisting of developers who have worked on games such as cult classics Darksiders and Darksiders 2, no surprise since its helmed by Joe Madureira - the comic book creator of Darksiders, and Battle Chasers. It had a successful Kickstarter netting in $856,354 (roughly Rs. 5.6 crores), with an initial target of $500,000 (around Rs. 3.26 crores).

The Battle Chasers’ comics were plagued by scheduling problems, with around six months between issues, but luckily thus didn't happen with the game - Battle Chasers: Nightwar is out on October 3. Gadgets 360 spoke to Joe Madurerira's brother, Steve Madureira, Lead Designer and Animation Director at Airship Syndicate, to know more about the making of the game.

“While we did really well with Kickstarter, and it got the game off the ground, it wasn’t quite enough to make the game we really wanted to make," [Steve] Madureira says. "Some of the stretch goals were unmet for example. And when we were approached by THQ Nordic, it gave us a great opportunity to make an even better game than what we had initially pitched and we took the opportunity to do so."

Much like the Batman Arkham series, Battle Chasers: Nightwar is based on a comic series, albeit a lesser known one. We wanted to know how the creative process differs between games and comics, particularly considering the amount of liberty at Airship Syndicate’s had, given that Joe Madureira owns of the IP.

“I think the characters lend themselves great to video games, being inspired by RPGs and anime as they were," Madureira says. "I think the biggest challenge came with deciding what things to make concessions on for the sake of making the game fun, versus being faithful to the comic itself.” This resulted in some interesting tweaks that fans of the comics will notice.

“Some examples of this may be Calibretto’s healing magic which he doesn’t use at all in the comics, or the decision to let Garrison and Gully replace their artifact weapons with new ones found in the game," he explains. "While it would be cool for them to keep their iconic weapons for the whole game, we felt it would be more fun to get new gear and see them visually change throughout the game like all the other heroes. For that specific example though, players may notice that Gully’s gauntlets and Garrison’s sword can’t be sold.”

The core gameplay loop of Battle Chasers: Nightwar has you exploring a mysterious new continent and combating hordes of monsters in its dungeons. For most part, it works without feeling like a grind. Considering it's the studio’s first RPG, we wondered what’s the secret behind its slick pacing and level progression. Madureira says iteration and constant feedback made it possible.

“It’s a nervous moment getting it into the hands of someone who has never played it before and seeing if what we were trying to get across comes through," he says. "It was really helpful watching how people played through the game, it helped us figure out what was working and what wasn’t."

Interestingly, Battle Chasers: Nightwar’s dungeons are randomised. Consisting of around eight or ten rooms, they’re picked from a pool of around 30 options made by the team. While this ensures replayability it also made us wonder how this would impact the game’s story, since bits of lore of the game world and its characters pepper these areas.

“The lore can spawn randomly but each time you find a lore entry for that dungeon, it will be removed from the available list of lore that can spawn, guaranteeing that players can get all of the lore without battling RNG [random number generator],” Madureira says.

One minor grouse we noticed in our time with the game is that you’d have to upgrade stores like the blacksmith with in-game currency in order to get better weapons. Madureira explains that this is to give those who can’t find items within the game world an opportunity to get new gear.

“The main source of attaining loot in the game was always intended to be through finding loot and through crafting, with the blacksmith available to fill in gaps where you’ve had trouble finding gear," he says. "As you upgrade the blacksmith, he can become an actual source for really good loot and upgrades, equivalent to what you can find or craft, as well as unlocking the ability to craft while in town."

The conversation turns to the challenges in game development. Like most indie efforts these days, Battle Chasers: Nightwar runs on Unity. While fantastic for PCs and mobile, it’s notorious for issues on the PS4 and Xbox One. In our time with the PS4 version we noticed long load times. Could we expect other issues on consoles?

“We encountered normal and expected development challenges for the different platforms, each having their quirks and benefits," says Madureira. "We have some longer load times I think when you initially launch the game and some things are loading in the background."

“It should become less pronounced as you play in a session and more things are fully loaded," he adds. "Certain scenarios like loading into the game and getting into combat right away will force a wait while it loads the creatures it needs.”

On that note Battle Chasers: Nightwar was in the news recently due to its delay for the Nintendo Switch. Madureira tells us this was also due to concerns with Unity. "The Switch version will be delayed as we are waiting for Unity to address an issue we’ve encountered, hopefully not too long,”he says.

Speaking of the Nintendo Switch, the game is more expensive on it, compared to other platforms. It is $10 more for the physical edition on the Switch, than on the PC, PS4, or Xbox One. This is due to higher costs of cartridges versus optical media used for other platforms. Colloquially this is referred to by developers as the Nintendo Switch tax. Does Airship Syndicate see this as being an obstacle to sales?

“I think the Switch offers something very unique in that you can play it on the go, and think that a lot of gamers, myself included, won’t be too discouraged by the higher cost," says Madureira. "I’m playing Breath of the Wild right now and love being able to take it with me anywhere."

Despite extolling the virtues of the Nintendo Switch’s portability, don’t expect Battle Chasers: Nightwar on iOS or Android, as Madureira says the company doesn't have any plans for an iPad or mobile version of the game. That's particularly tragic considering its gameplay would translate quite well to touchscreen-only devices.

If a mobile port isn't happening, what's next in the pipeline? In the past, Airship Syndicate suggested that its next title would be based in the Metroidvania genre. But would it be on an existing IP like Battle Chasers or something brand new? Madureira left us with this.

“Metroidvania is one of our favorite genres and we’d definitely love to work on one. I think a new IP would be a lot of fun to take on and create a fresh new world for people to enjoy."