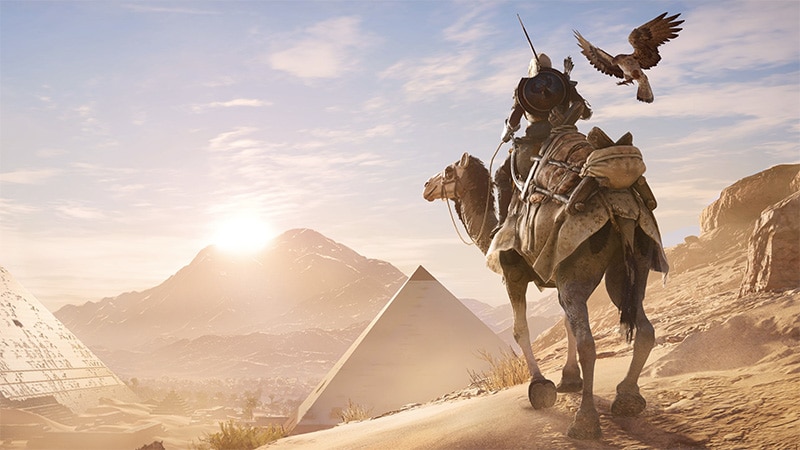 If you thought September was a great month of gaming, things are just hotting up as we hit the peak release month of the year. October is the time we usually see all the top-end AAA titles release every year, and 2017 is no different. With the Xbox One X release set for early November, expect an arsenal of 4K-optimised launch titles for Microsoft’s highly anticipated gaming beast.

It’s worth taking a break from FIFA 18, and checking out this list of games that you should be looking forward to in October.

After a break from its yearly release cycle, Assassin’s Creed makes a comeback in a new form that’s probably the biggest leap the franchise has taken since taking on the high seas in Black Flag. Set in Egypt, the game is filled with exotic locales that include the massive pyramids and of course the sand dunes that surround the cities. Ubisoft wants to make sure you explore every bit of their new offering since this time the game comes without a minimap. Instead you will have a Skyrim style pointer sending you in the right direction. There are many other changes that were highlighted at E3 this year, and since it’s one of the launch titles for the Xbox One X, expect some performance tweaks on that platform.

Shadow of Mordor took the best bits from the Batman Arkham series and Assassin’s Creed franchise, and made them its own by adding a boatload of The Lord of the Rings lore, and abilities that would make any Tolkein fan giggle with joy. The most revolutionary part about the game was its brilliant nemesis system, that made AI-driven rivalries more interesting with enemy Uruks getting promoted every time they defeated you. Now this system is being taken to a new level in Shadow of War. You still play Talion and Celebrimbor, but now you take on the dark lord Sauron himself by forging an army of your own. Sure Tolkein purists will cringe at the liberties taken by the franchise. But after what WB Games showed us at E3, wild Ringwraiths couldn’t keep us away from this one.

Americans taking on Nazis with big guns and lots of explosions - it’s as Hollywood as it gets with this sequel to the hit game Wolfenstein: The New Order. Nazis have taken over the United States in this alternate timeline, and it’s up to BJ Blazkowicz, aka “Terror-Billy,” and the Resistance to make things right. Set in 1961, the game takes you blazing across a number of locations including Roswell, New Mexico, New Orleans, and a post-nuclear Manhattan. Oh, and there’s also a Nintendo Switch version of the game in the works, but you’ll have to wait till next year for that one.

No Nintendo console is complete without a new Mario platformer, which practically ends up defining that console generation. For Nintendo Switch that game is Mario Odyssey. It’s still the age-old tale of Mario rescuing Princess peach from the relentless Bowser, but what’s new here is Mario’s new hat-shaped ship called Odyssey. Mario moves out of the Mushroom Kingdom’s comfort zone and explores new Kingdoms including the modern world-inspired New Donk City. He also has a new cap called… erm, Cappy, through which he has the power to possess anyone who wears it. Well, to be fair Mario was never about the premise, but the gameplay looks as solid as ever.

South Park: The Fractured But Whole

The Stick of Truth was an excellent RPG set in the South Park universe that achieved the one thing no other South Park game could - capture the real humour of the show. Now, The Fractured but Whole ditches the fantasy genre of the previous game for an all-new superhero theme. It features 12 classes of characters, lets you select your gender and race, and comes with a revamped fighting system.

While Sony is still prepping with its marque racing simulation Gran Turismo, Microsoft has a third Forza simulation game all set to release this October. Besides the updated visuals and gameplay tweaks, Forza 7 will feature over 700 cars and over 200 different configurations to race on across 32 locations. All this at the time of launch. It will also include all the tracks from Forza 6, and some from other previous Forza games, so there’s a lot of racing guaranteed. It gets the dynamic weather system from the Horizon series and now you can even customise your driver.

PC gamers will soon get their chance on Destiny 2, which has been a console exclusive all September. But the wait will be worth it if the open beta was a glimpse of what to come. Destiny 2 will come with a pretty big visual upgrade on the PC, which makes it look better than it already does on the consoles. Take a look at this video for a glimpse.

Well of course you need a good scary game release for the Halloween month, and what better game than the incredibly twisted Evil Within 2? This time, it’s a story of Sebastian’s redemption for which he must descend into the nightmare to win back his life and family. Rest assured, you’re going to get a similar brand of disturbing enemies, and a very limited supply of ammo to deal with them. It’s the stuff of nightmares!

It’s the longest running wrestling game franchise, and year after year, wrestling fans can’t get enough of it. This time, the game offers you eight man matches, a new grapple carry system, new weight detection, thousands of new animations and a huge backstage area. To top all of it, it also has the biggest roster ever.

Any PC strategy game fan worth his/ her mettle has deep roots in the Age of Empires franchise. If you’ve been missing the game for a while, here’s a great reason to get back into the action. The new remaster, gives you upgraded visuals and 4K graphics, along with numerous gameplay improvements.

This isn’t all either, if you’re using PlayStation Plus or Xbox Live Gold, here’s what you can play this month.

Games for PlayStation Plus - October 2017

What are you playing this October? Let us know via the comments.