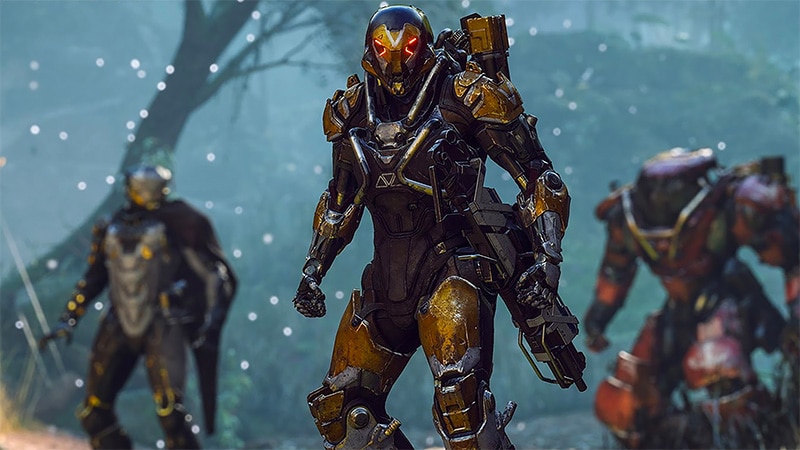 With Far Cry: New Dawn, Metro Exodus, Jump Force, and Crackdown 3 out on February 15, it appears that for some, the day after Valentine's Day might just be the day is when they'll find true love. Though this isn't all. Shared world shooter Anthem from Mass Effect and Dragon Age maker BioWare hits the shelves this month alongside, racing game Dirt Rally 2.0 and the Monster Hunter-inspired God Eater 3. Who needs love when you have these? Here are the biggest games of February 2019 alongside the free PS Plus and Xbox Live Gold titles for the month.

Bioware has had a rough generation with its last game Mass Effect Andromeda (Review) not being as good as compared to past entries in the series.

The company famous for highly narrative-driven action RPGs is taking a different direction with Anthem - a 'contiguous' shared world game. You take control of a Freelancer in an Iron Man-like exosuit called Javelin, which can be customised to have different levels of armour, weapons, and abilities. We played the demo and weren't too impressed with what was on offer, but Bioware promises that a number of crucial elements will change in the final release. Let's hope we don't get another Fallout 76.

Far Cry 5 (Review) was one of the best entries in the series, especially when it comes to the overall story of the game. Ubisoft knows this and that's why we're getting a new spin-off game that takes place seventeen years after the events of Far Cry 5. The new antagonists Mickey and Lou, make Far Cry 5's Joseph Seed look like a reasonable man in comparison, and as revealed in the story trailer below, that's exactly who you end up going to for help. If you finished Far Cry 5 wanting more, then this is exactly what Far Cry: New Dawn is.

Take all your favourite desserts and mash them together into a gigantic pile of mega-dessert — that's how anime fans would look at Jump Force. It puts sixteen anime universes in the real world for a massive fighting game mash-up. You have characters from Naruto, Bleach, Death Note, One Piece, Dragon Ball, and more for a total of 40 playable characters. Developed in Unreal Engine, Jump Force will be an interesting game to watch out for this February.

Since the good old Xbox 360 days, the Crackdown series has had a niche but loyal following. This generation of consoles may be in their final year, but Microsoft is now finally fulfilling its promise of delivering a Crackdown game for the Xbox One. Though, in the years between the Crackdown games, the open world action genre has grown tremendously, so it remains to be seen whether Crackdown 3 — after so many years in development — will still be as enjoyable as the first two games in the series, or will it come across as a relic from the past? Not even tying up with Brooklyn Nine-Nine's Terry Crews would be able save it then.

Metro Exodus is the third instalment in the Metro series of games that are based on Dmitry Glukhovsky's novels. Though the series takes a very different approach as compared to, say, Fallout, fans of the series love it for the realism, challenging gameplay and the pure visual delight that the series has provided two games in a row. There's also an Xbox One X bundle announced with all the three games at the time of release, so if you always wanted to play the games but didn't have the means to, this could be your best way to start.

It's been a while since we've had a good rally racing experience, which is why we're looking forward to Dirt Rally 2.0. From what we've seen so far the game features cars and circuits based from the FIA World Rallycross Championship spanning across multiple countries, namely Argentina, Australia, New Zealand, Poland, Spain and the United States. There's also a new weather system that has real impact on car control and overall visibility adding a real-world feel to the game. The most impressive part though is the track degradation system, that wears down the track surface as more cars pass over it.

God Eater 3 combines hack-and-slash action with epic boss fights and RPG elements, which seems like a combination that works well if the Monster Hunter titles are any indication. We won't blame you for drawing parallels to that series of games, since there are a lot of similarities in God Eater 3. Although the game appears to be a departure for the series with development duties moving to Marvelous from series creator Shift and is the first game in the franchise to be designed without handheld consoles in mind either. Will better visuals and over the top action be enough? Find out on February 8.

That's not it. If you are a member of PlayStation Plus or Xbox Gold, there are some free games headed your way.

PS Plus Free Games for February 2019

Xbox One Games with Gold for February 2019

Which one of these are you planning to play this month? Let us know via the comments below.