Toofaan is a Hindi sports drama film starring Farhan Akhtar in the lead role, alongside Mrunal Thakur and Paresh Rawal in supporting roles. It has been directed by Rakeysh Omprakash Mehra of Bhag Milkha Bhag fame and is currently streaming on Amazon Prime.

The film is about Aziz Ali also known by the name Ajju Bhai, who is a local goon in Mumbai's Dogri area. As Ali develops a soft corner for boxing, he decides to coach under Nana Prabhu. However, during his sessions, he falls in love with Prabhu's daughter, marries off, and gives up boxing.

It is only after his wife's insistence after many years of marriage, that he decides to give boxing another chance and starts preparing for a national level boxing championship. The rest of the story focuses on the various struggles and obstacles he comes across. 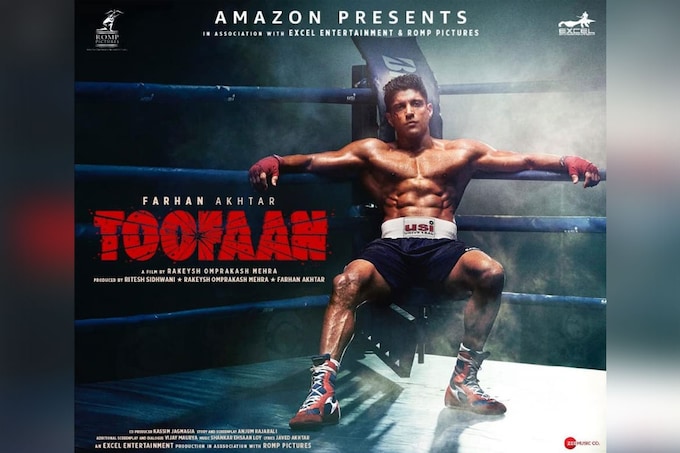 The official Toofaan trailer starts with Mrunal Thakur's character, Dr. Pooja Shah, encouraging the demotivated Aziz Ali aka Ajju (Farhan Akhtar) to fight his fears and get back in the boxing ring to start his boxing career again. The trailer takes us back and forth in the past and present lives of Aziz Ali, who was once a boxing star and street fighter from Dongri and how his one mistake crashes his entire dream. Paresh Rawal is seen playing the character of coach Nana Prabhu who trains him to become a boxing star. The Toofaan trailer shows that Dr. Pooja Shah has been the one person in his life who has been constantly motivating him to achieve his dreams of living a respectful life of a boxer. The trailer also gives a glance of the action-packed movie and shows how, after leaving the boxing ring, Aziz Ali prepares himself again to get back in the ring and conquer the boxing world yet again. Wait no more and watch the Toofaan official trailer below.

The music for Toofaan film is composed by ShankarâEhsaanâLoy, SamuelâAkanksha and Dub Sharma. The lyrics are penned by Javed Akhtar, Manoj Kumar Nath and D'Evil. Take a look at the Toofaan songs below.