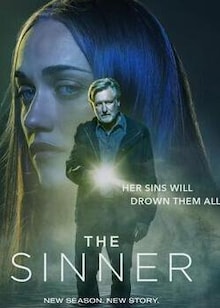 Share
Season 4
Crime Drama Mystery Thriller
4.5 ★ 2022 Season 4 English 18+
Now-retired Harry heads to an island along with Sonya to get his mind off the trauma of Jamie Burns’ case. However, another tragedy finds its way to the already troubled detective.

About The Sinner Season 4 Web Series

Harry (Bill Pullman) has now retired and still isn’t over the haunting memories of his last encounter with Jamie. He and Sonya (Jessica Hecht) decide to visit an island, to take their minds off the incident.

The couple meets the Muldoon family — who owns a fishing empire on the island — and its heiress Percy Muldoon (Alice Kremelberg).

At night, Harry hears some noises, decides to follow them, and — to his horror — finds Percy falling off the cliff to her death. Needless to say, he dons his investigation cap and begins the quest for truth. Listen on
The Sinner Season 4 Photos