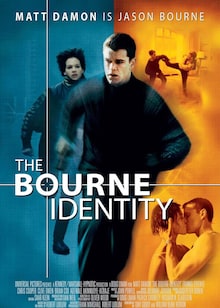 About The Bourne Identity Movie (2002)

An elite government agent, Jason Bourne (Matt Damon), is salvaged near death, having almost died due to being shot by two bullets in his back. He is pulled from the ocean by an Italian fishing boat.

When Bourne regains his consciousness, he suffers from total amnesia, which makes him lose his identity and dangerous past. But he discovers he retained a range of extraordinary talents in fighting, self-defence, and linguistic skills.

As Bourne starts to reconstruct his life, rebellious Marie (Franka Potente) wants to learn who really he is, as everyone who comes across him appears to want him dead. Listen on
The Bourne Identity Photos