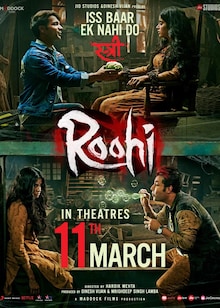 It is customary in Bagadpur village for the groom to get the woman he fancies kidnapped before the marriage.

However, it soon turns out that she is possessed by Mudiyapairi, a demonic spirit who is not ready to leave her body until both of them are married off to suitable grooms.

Things take a comic turn when Bhawra falls for Roohi and Kattanni falls for Mudiyapairi.

The rest of the story revolves around the various methods the duo takes up to exorcise the spirit.