The first MCU Disney+ series is unlike anything Marvel has ever done. 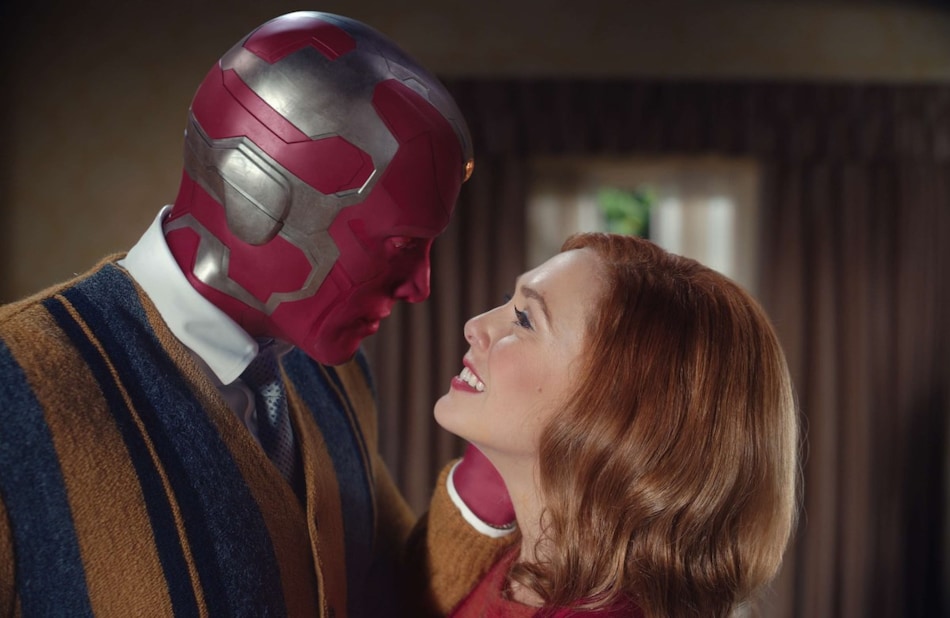 WandaVision — Marvel's first (mini)series on Disney+ and Disney+ Hotstar — is a weird delight. It features Wanda Maximoff (Elizabeth Olsen) doing the dishes and Vision (Paul Bettany) belting out his dulcet tones at a dinner party. Two of Marvel's most powerful superheroes, who've been busy saving the world over and over, have suddenly been relegated to homebody stuff. In that sense, it's very much like our collective experiences over the past year, as we've found ourselves stuck at home. The initial episodes — I've seen three — are largely in black-and-white, filmed in a 4:3 aspect ratio. And oh, did I mention that it's set in the fifties? WandaVision is Marvel's first new offering since Martin Scorsese compared Marvel movies to theme parks and complained they didn't constitute “cinema”, and the new Marvel series seems like a direct response to those remarks.

Of course, part of that is merely accidental. WandaVision is the first entry in the Marvel Cinematic Universe's Phase Four — that's an insider term that refers to the post-Avengers: Endgame era — but it wasn't planned like that. Scarlett Johansson-led Black Widow was set to kick things off last April, with The Falcon and the Winter Soldier, starring Anthony Mackie and Sebastian Stan, to follow up on TV as the MCU began its Disney+ journey. WandaVision was going to be third in line, but then the pandemic swept over us and delayed everything. In a way, it's worked out well for Marvel. Black Widow and Falcon and Winter Soldier look a lot like Marvel's existing offerings, in line with Scorsese's criticisms. WandaVision is unlike anything in the MCU, and its boldness augurs well for Marvel's Disney+ start, something Marvel chief Kevin Feige also acknowledged.

WandaVision's monochromatic Academy-ratio look is inspired by dozens of classic American sitcoms it pays homage to. That includes the likes of I Love Lucy, The Dick Van Dyke Show, I Dream of Jeannie, Bewitched, Family Ties, and Full House. And just like some of those shows, WandaVision transitions to colour as it progresses, adopting new tropes and styles along the way. It starts off as a Hollywood Golden Age sitcom with a laugh track — episode 1 was shot with a live studio audience — and silly jokes at a staccato rhythm, and then moves through the decades as it employs physical comedy, animated sequences, and pops of vibrant colours. WandaVision even has period-appropriate title sequences new to each episode, and they come with opening theme songs crafted by the Frozen duo of Kristen Anderson-Lopez and Robert Lopez.

But WandaVision isn't just that. The sitcom appearance is a façade for a larger mystery lurking beneath the surface — it technically takes place after the events of Endgame, and will lead into Doctor Strange in the Multiverse of Madness, which stars Olsen — one that gets the briefest of mentions early on. In that essence, it feels closest to Westworld (whose creative team included lover of mystery boxes J.J. Abrams) and seems set to spawn endless theorising after each episode. And just like with the HBO series, I'm sure enthusiasts and Redditors will figure out WandaVision's true nature within the first few episodes.

The first Marvel Disney+ series opens with a “just married” sign on the back of an old-timey car. The couple in question is Wanda and Vision, who have just arrived in the idyllic suburban town of Westview. They both acknowledge they are an unusual couple even apart from the whole superpower business — they have no wedding rings, no wedding pictures, and even no memory of a wedding — but Wanda wants them to “fit in”, and that's what they do. She does her best to be a housewife, prepping meals and organising local events with other women. Vision spends his days typing out forms in a 9-to-5 office job. He once wonders what the company really does, but no one seems to know, in what feels like a jab at bureaucracy and being a cog in the machine.

There are early signs that something is amiss, with both Wanda and Vision struggling to remember the importance of an upcoming day. The two also have trouble recollecting anything from their pre-Westview days, as they discover when a dinner guest asks them the simplest questions. Exasperated, said guest screams, “What is your story?”, in what reads like a question being asked by the series' audience. After all, Vision died — twice, at the hands of Wanda and the big bad Thanos — in Avengers: Infinity War, but he seems to be alive and well on WandaVision. What is their story? The Marvel series — crafted by creator Jac Schaeffer, an in-house Marvel talent who has worked on Captain Marvel (uncredited) and Black Widow (story) — is in no hurry to provide answers though, with the early episodes functioning as sitcom episodes for the most part.

In the first episode, Wanda and Vision have to manage an impromptu dinner party, which goes hilariously off the rails. In the second, the two sign on to do a magic show for a local fundraiser — it comes across as Chaplin-esque in parts — which also goes hilariously off the rails. And in the third, they must deal with a life-changing event that is progressing much faster than it usually does. In between and all around this, WandaVision sprinkles in jokes on Wanda and Vision's dual personalities, which play on the fact that the audience knows more than the show's other characters do.

Speaking of other characters, WandaVision has three from the larger MCU: Monica Rambeau (Teynoah Parris) from Captain Marvel now an adult, Dr. Darcy Lewis (Kat Dennings) from Thor and Thor: The Dark World, and FBI agent Jimmy Woo (Randall Park) from Ant-Man and the Wasp. The only new entrant is Agnes (Kathryn Hahn), a nosy neighbour.

WandaVision has its rare dramatic moments too. They explore Wanda's familial worries and maternal desires, the death of her brother (who was killed in Avengers: Age of Ultron) and the mental anguish it has caused. These are all moments she's never been allowed before, because Marvel movies don't have room to process those feelings, and even more so because Wanda is a supporting character and has never had a standalone film.

Just as the trailers hinted, the sitcom world seems like a construct manifested by Wanda in pursuit of a normal life she's never had. Or maybe as a refuge from a danger of sorts. There are hints early on in WandaVision that this supposedly virtual state might not be of Wanda's own making, with fake commercials further serving as proof of the same. Feige has admitted that the bigger truths about the show will come out of these ads.

It's a credit to Matt Shakman, the director best known for It's Always Sunny in Philadelphia (40+ episodes) and Game of Thrones (“Eastwatch” and “The Spoils of War”), who shows himself able to handle both the light and the heavy, and bring a soft touch to darker notes. Of course, the true test of his abilities lies in the remaining six episodes, which Disney has not made available to critics prior to the show's release. WandaVision is different than everything we've gotten previously. There's nothing cookie cutter about its approach, something Marvel has been rightfully accused of in the past. But how will it fare as it approaches its endgame? After all, its creators have already spoken about it being like a big action MCU movie in the third act. Will it remain very unlike Marvel throughout or will it eventually dissolve into a generic MCU actioner?

WandaVision premieres January 15 on Disney+ and Disney+ Hotstar. Two episodes will air in week one, with one weekly thereafter until March 5.