Spoilers ahead for WandaVision episode 5. 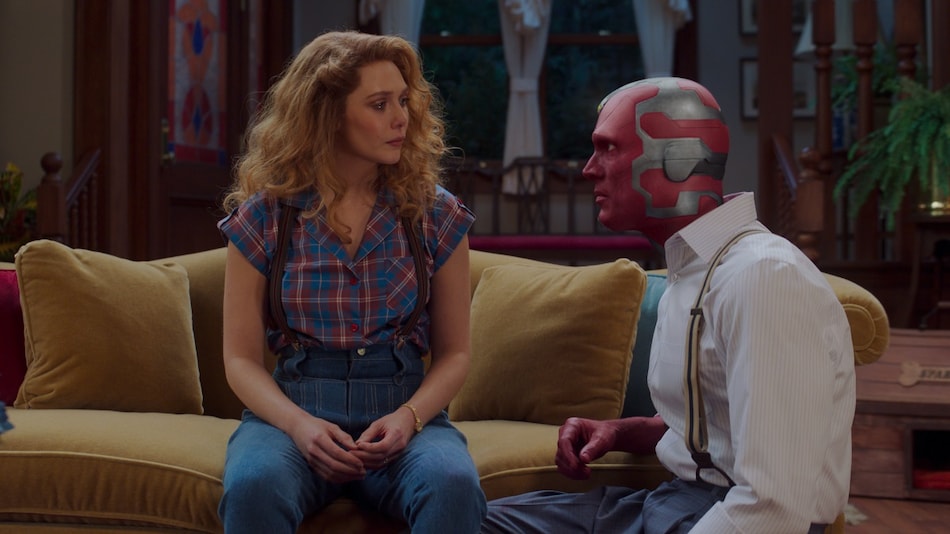 WandaVision episode 5 — out February 5 on Disney+ and Disney+ Hotstar — just possibly laid the groundwork for the X-Men's entry into the Marvel Cinematic Universe. At the very end of the new episode, Quicksilver (Evan Peters) arrives at the Vision residence to greet his very surprised sister Wanda Maximoff (Elizabeth Olsen). Now this is weird on multiple counts. For one, Wanda's brother Pietro Maximoff / Quicksilver (Aaron Taylor-Johnson) died in Avengers: Age of Ultron. So if you expected another character to be resurrected, à la Vision (Paul Bettany), you would think it would be the Taylor-Johnson version of the character. Secondly, Peters' Quicksilver is not only called Peter (not Pietro) Maximoff but is the son of Magneto (Michael Fassbender), so he comes from Fox's X-Men universe.

How is this happening? Well for one, Disney acquired Fox a couple of years ago, which gives Marvel Studios the license to bring in characters from X-Men, Deadpool, Fantastic Four, and beyond. In fact, a Ryan Reynolds-led Deadpool 3 is in development for the MCU, and Marvel Studios president Kevin Feige announced a Fantastic Four reboot back in December. There was no talk of an X-Men return then, but I guess we now know why.

WandaVision Episode 4 Recap: It's All Wanda

That Quicksilver reveal is a huge moment for the MCU, though it won't make as much sense to people who didn't watch any of the three recent X-Men films (he was in 2014's X-Men: Days of Future Past, 2016's X-Men: Apocalypse, and 2019's Dark Phoenix). If you want to see more of him after WandaVision episode 5, I'd suggest sticking to Days of Future Past, as the other two are downright terrible. It's a bit strange that Peters' Quicksilver responds to Pietro as a teary-eyed Wanda calls him, though I suppose Marvel will explain that in future WandaVision episodes.

That moment was a standout in more than one way, as it also bore no connection to everything else that occurred on WandaVision episode 5 — titled “On a Very Special Episode…”, directed by Matt Shakman, and written by Peter Cameron and Mackenzie Dohr.

WandaVision episode 5 opens in the ‘80s (and finally boasts 16:9 aspect ratio that sitcoms carry through to this day). Wanda and Vision have trouble putting the twins Tommy and Billy to sleep. After Wanda sends Vision to fetch their pacifiers, she even tries using her powers to quiet them, to no avail. And the pacifiers don't keep them quiet for too long either. Enter (overly) friendly neighbour Agnes (Kathryn Hahn), who volunteers to be the nice aunt and babysitter. Vision is a little hesitant about her offer though, which leads Agnes to turn to Wanda and break her spell, asking her if she should run it again. It's like the actor is asking the director if they should give the shot another take.

Vision is naturally put off and Wanda — the orchestrator of this sitcom-y world — does her best to quell his concerns. He's not quite convinced but they realise that the babies have stopped crying. They walk to their cribs to discover that the twins have disappeared, only to be turned out by two five-year-olds (Gavin Borders and Baylen Bielitz) calling Wanda and Vision mommy and daddy. Oh my, Tommy and Billy went just grew up in seconds — faster than even Wanda's pregnancy. Agnes seems to pay no heed to the matter, which is intriguing in itself. Why is she bothering less to play along with Wanda's wishes? Or rather, how is she doing it? Shouldn't Wanda's mind control powers prevent her from doing so?

Anyhoo, WandaVision episode 5 cuts to an ‘80s themed title sequence, which now consists of the five-year-old Tommy and Billy too, enjoying life alongside their parents.

The programming resumes on the other side of Westview, with Captain Monica Rambeau (Teyonah Parris) processing her stint inside Westview. FBI Agent Jimmy Woo (Randall Park) pays her a visit along with Dr. Darcy Lewis (Kat Dennings) who reveals herself to be a huge Monica fan. That's interesting. The doctor says she isn't pleased with Monica's brain scans and bloodwork, but Monica isn't having any more of it. She gets up and changes to attend a S.W.O.R.D. briefing, where (acting) director Tyler Hayward (Josh Stamberg) paints Wanda as the villain of the story, noting she came to the fore as the Avengers' antagonist (from Avengers: Age of Ultron) and mentions her out-of-control behaviour in Lagos and Germany (from Captain America: Civil War).

Hayward points out that Wanda is holding thousands of people hostage, and then reveals that she stole Vision's (seemingly dismantled) body from S.W.O.R.D. HQ before resurrecting him. WandaVision episode 4 seemingly revealed that Vision was dead after all, given that blink-and-you-miss-it shot of Wanda seeing Vision as he was after Thanos killed him, but now WandaVision episode 5 seems to be hinting that he might actually have returned from the dead. Hayward notes that Wanda's actions go against Vision's will (he didn't want to be anybody's weapon), and Woo adds that it's also in violation of the Sokovia Accords.

Hayward also further clues us in on the timeline of WandaVision. Wanda stole Vision's body just nine days ago, at the time of WandaVision episode 5, so everything we've seen yet has happened in that time frame. In total, WandaVision takes place about a month or so after the events of Avengers: Endgame, and several months before Spider-Man: Far from Home.

Later, back inside the sitcom world, Tommy and Billy come across a small dog they want to keep. Wanda isn't sure they are ready to take care of a living thing, but she then falls in love with the animal itself. Vision and Agnes walk in one after the other, with the latter carrying a readymade kennel. The fact that Agnes seems to always readily have Wanda needs, is a way of hinting for WandaVision. Note the dinner ingredients she showed up with in WandaVision episode 1, and now, a full-blown dog house. Wanda is also doing less to conceal herself around Agnes, which naturally invites questions from Vision, since they were supposed to conceal their identities to stay in Westview. Wanda's reply? I'm tired of hiding myself.

As for the dogs, Vision believes the boys won't be ready until they are 10 years old to take care of one. In response, the twins once again age themselves up in seconds, growing into the 10-year-olds (Jett Klyne and Julian Hilliard) they need to be to have the dog. Agnes again doesn't seem to care or notice.

Meanwhile outside, Monica, Woo, and Darcy are trying to figure out how to sneak into Westview again. Their conversation reveals that Monica doesn't like talking about Captain Marvel — I wonder what happened there — before she figures out that Wanda has been rewriting reality inside “the Hex” (it's the name Darcy came up with for the Westview anomaly, and she's hoping it will stick. Woo doesn't believe so). Monica discovers that her ‘70s clothes — the ones they recovered after Wanda threw her out — are made up of Kevlar. It's the material bulletproof jackets are made of, something she was wearing when she was sucked in. They hatch a plan, to send in something that doesn't need to be changed to fit in.

Back in, Vision's questioning turns into him using his powers on his colleague Norm (Asif Ali), who reveals that he has a life outside, one where his sisters and parents need him. Norm asks to be saved from her, by which he means Wanda. At the Vision residence, the twins have questions of their own, as to why their dad is off to the office on a weekend. Wanda tries to placate them by telling them that couples can have problems at times, but that their father still loves them very much. The dog, named Sparky, runs to the door and begins to bark, prompting them to open the door and see what's happening.

Monica has sent in a drone from the ‘80s, in an attempt to talk to Wanda. But what she doesn't know is that her superiors, including Hayward, have weaponised it. The drone malfunctions as Wanda takes control using her powers, prompting Hayward to order a missile launch. Monica is aghast but they don't have time for an argument, as the PA system announces a perimeter breach.

Cut to outside, where Wanda walks out of the Hex for the first time on WandaVision, dressed the way she was in Avengers: Infinity War and Endgame. She speaks in her original accent, not the Americanised one she's adopted inside. Wanda wants SWORD to leave her alone as she means them no harm. Hayward notes that she's controlling people, to which she retorts by saying that she's not the one with weapons aimed at people. Monica tries to cool the situation down and position herself as an ally, but Wanda makes it clear that there's nothing Monica can offer her. In Westview, she has what she always wanted (though at considerable cost to others).

Back inside, the twins are trying to look for Sparky who's been lost. Wanda joins them and they end up at Agnes', who reveals Sparky bundled in a cloth — he's dead. The boys want their mother to bring Sparky back from the dead (they almost suggest they know that she did so with their father), forcing Wanda into a corner where she has to lie that death ought to be permanent and that you shouldn't reverse the dead — thereby having to reckon with some of her own actions.

Back home, Vision finally confronts Wanda about the situation. Vision says he doesn't know even who he is — prompting Wanda to respond: “You're a father and a husband, isn't that enough?” Wanda also denies that she's controlling everything in Westview, noting that she couldn't possibly control every aspect even if she wanted to. They are interrupted by the doorbell, which Vision believes is a distraction created by Wanda to get out of this tough conversation. Wanda claims it's not her doing, but Vision's confidence in his wife has been shot. Their marriage looks like it's on the rocks.

As the bell rings again, Wanda gets up to answer the door. Her face goes all pale, as it's someone she doesn't expect — which is saying something given Westview is indeed all her. WandaVision episode 5 doesn't leave us hanging (thank goodness) and reveals that it's Evan Peters as Quicksilver. Darcy, who's watching from a monitor, has a reaction that might match some in the audience: “She recast Pietro?” But that doesn't seem to be the case as Wanda herself struggles to place him, before going “Pietro?” Quicksilver nods and hugs her, even though that wasn't his name when we last met him. What is going on? Will someone tell us? Well, that's a story for WandaVision episode 6.

WandaVision episode 5 is now streaming on Disney+ and Disney+ Hotstar. New episodes release every Friday around 1:30pm IST / 12am PT.