Spoilers ahead for WandaVision episode 1. 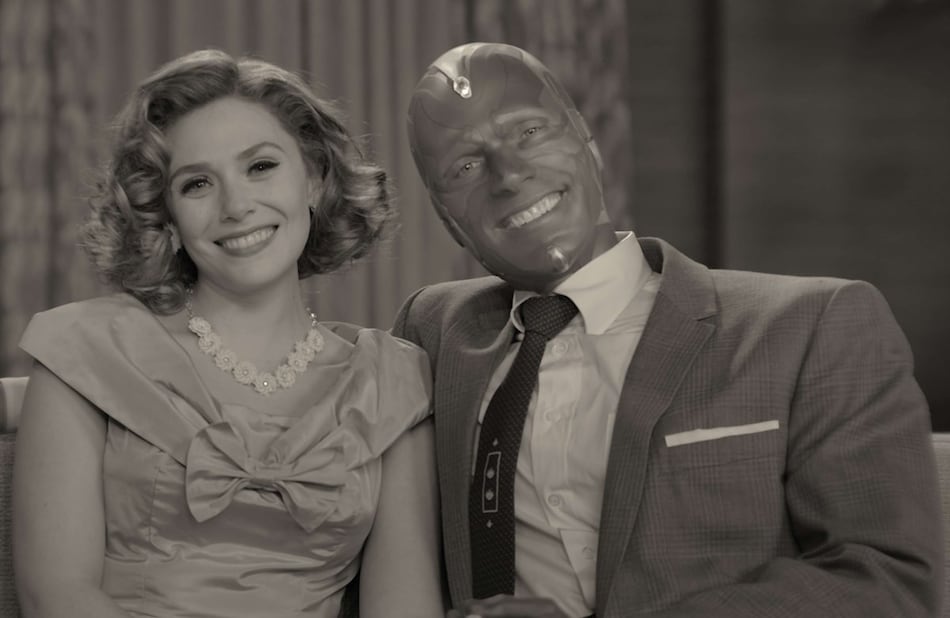 WandaVision episode 1 is out now, ending our 18-month wait for new MCU content, but this isn't the Marvel that we remember from Avengers: Endgame and Spider-Man: Far From Home. The entire episode is modelled after a Hollywood Golden Age sitcom, from the 1950s, replete in black-and-white, a near-square aspect ratio, and a live studio audience, actually. It's got those silly jokes that you associate with old-timey sitcoms too, delivered with the kind of pauses and background sounds you would expect from a theatrical production. It seems more like a stage play than a TV episode. And there are virtually no clues here about what's really going on.

The 22-minute WandaVision episode 1 — directed by Matt Shakman and written by Jac Schaeffer — opens with Wanda (Elizabeth Olsen) and Vision (Paul Bettany) driving into a suburban American town called Westview. Wanda is wearing a white gown and there's a “just married” sign on the back of their car. They're married! Wait, what? Also, how is Vision still around? He died in Avengers: Infinity War — twice in fact. WandaVision episode 1 isn't interested in explaining any of that, though it does introduce their respective powers for viewers to whom the characters might be all new. Wanda is telekinetic and can put broken things back together, and Vision has an indestructible head. (There's more to it, yes.)

Vision then notices that a heart-shaped symbol has been drawn next to today's date on the calendar in the kitchen. It's clearly a special date for the couple, but the two of them can't begin to recall what it really is. Not wanting to be labelled the forgetful one, they both pretend that they know. This is the first sign in WandaVision that something is amiss. Apart from the whole being in the fifties and Vision being alive business, of course. Their memory lapses are shared, and when one of them struggles to remember, both of them are at the same moment. Could they be the same person? Is Wanda merely imagining Vision's existence? She's capable of it, after all.

Having kissed and found solace in tonight being special for them both, Vision then leaves for work. Wanda is startled soon after by repeated knocks on the front door. She opens it to find Agnes (Kathryn Hahn), their neighbour on the right. “My right, not yours,” she adds with a chuckle. Agnes is curious about who she is, how she moved in so quickly (“Did you use a moving company?” “Yes of course, the boxes sure didn't move themselves”), and what a “single gal” like her is doing in a town like this. There's no ring on Wanda's finger, you see. Wanda assures Agnes that she's very much married, to a man (these are the ‘50s after all) — a human one at that (ha ha Vision is android, get it?).

After Wanda reveals that tonight in a special night for the couple, Agnes probes further before the two settle at “anniversary” as the answer. Wanda can't recall the real thing anyway. Agnes then volunteers to help Wanda prepare for the special night.

Meanwhile, at Computational Services Inc., Vision is typing away at superhuman speeds. A colleague Norm (Asif Ali) remarks at his speed after he's done, noting that productivity has gone up 300 percent since he arrived and calls him a “walking computer”. Vision, who's trying his best to hide his true identity, replies immediately: “I most certainly am not.” He later wonders what the company does — do they make something? do they buy or sell something? no, no, and no — in what comes across as a jab at capitalism and how employees feel like they have no greater purpose.

Just then, Vision's boss Mr. Hart (Fred Melamed) walks in, sending everyone scurrying to their desks. Mr. Hart reminds Vision about the dinner, and Vision connects the dots to believe that the special event tonight must be a dinner party with the Harts. There was a heart on the calendar (ha ha, wordplay). Mr. Hart stresses on the importance of the dinner going well, pointing out how the last employee to disappoint him — despite having five courses, a string quartet for entertainment, and wearing a turtleneck (oh no) — has been fired. A nervous Vision rings Wanda to stress on the importance of tonight going well. Except they are still pretending they know what the night is really about (oh no).

WandaVision episode 1 is interrupted midway through by a fake commercial about a toaster called ToastMate 2000. The toaster is made by Stark Industries, the series' first connection to the larger MCU. There's something ominous and telling about the tiny red light and the beeping sound it's accompanied by. The ad for ToastMate 2000 ends with the slogan “Forget the past, this is your future”, which sounds like it's talking about WandaVision.

While Wanda is now preparing for their anniversary, Vision believes she's preparing dinner for the Harts. Naturally, this leads to chaos when the Harts turn up at Vision residence. Wanda is ready for a romantic evening, and she spooks her guests as she places her hands on Mr. Hart's eyes from behind. It doesn't help that she's wearing a revealing gown. Wanda and Vision reconvene in the kitchen to figure things out. Wanda says the outfit is because it's their anniversary. Vision explains the heart on the calendar was an abbreviation for a dinner with Mr. & Mrs. Hart. Wanda retorts: “You move at the speed of sound, and I can make a pen float in the air. Who needs to abbreviate?”

Now in a bind, Wanda assures Vision that she will cook something imminently while Vision tends to the hungry guests outside. She enlists the help of her neighbour Agnes, who turns up with enough ingredients to feed three families. Through Agnes, WandaVision episode 1 takes shots at traditional gender roles too: “What kind of housewife would I be if I didn't have a gourmet meal just lying about the place?” Once again, Agnes outstays her welcome and promises to walk Wanda through everything, but that's because she doesn't know that Wanda has really different kitchen manners.

After she all but pushes Agnes out of the back door, Wanda lifts her fingers and simultaneously begins to cook every meal course with her superpowers. For WandaVision, it's time to sprinkle in some physical comedy. Hearing the commotion in the kitchen, Mrs. Hart (Debra Jo Rupp) volunteers to help Wanda, forcing Vision to do something dramatic to distract Mrs. Hart. He launches into an impromptu song, which confuses Mr. Hart but gets the job done as Mrs. Hart turns around and starts swinging. Wanda uses the brief distraction to close the shutters that see into the kitchen, preventing the Harts from knowing the couple's true nature.

From WandaVision to Tandav, What to Stream in January

But Wanda has other problems. The cooking isn't going so well — she accidentally overcooks the chicken until it's all burnt (“Oh no, too much!”), and when she tries to reverse the effect, it turns into a basket of eggs (“Oh no, not enough!”). Amidst all the chaos, as Mr. Hart barks at Vision about what a failure the night has been, Wanda decides to improvise and serves breakfast for dinner. Mr. Hart is taken aback, but the sight of wine calms things down. At the dinner table, Mr & Mrs. Hart start asking the simplest of questions: where they lived before, when they married, and why they don't have any kids. This is another reminder that Wanda and Vision have no memory at all about their past.

Mr. Hart is displeased that the new Westview couple can't seem to offer the easiest of answers. “What is your story?” he demands. With neither able to offer up any answer, Mr. Hart ultimately pounds his fist on the table and shouts “Why?”. Just as he does, a piece of food gets stuck in his throat, which Mrs. Hart assumes to be a pretend. “Oh, stop it,” Mrs. Hart reprimands her husband. WandaVision episode 1 reveals its otherworldly nature at this moment. Wanda and Vision are seemingly transfixed, while Mrs. Hart keeps repeating the words “Stop it” as her smile dissolves into a cry for help. Wanda ultimately snaps out of her spell and asks Vision to actually help his boss and save his life.

Vision reaches into Mr. Hart's throat and pulls out the offending morsel of food. Pulled from the jaws of death, Mr. Hart makes no mention of the fact and instead remarks that it's getting late. Wait, what? Incredulously, Mrs. Hart seems to have forgotten all about the choking incident too. The Harts get up, bid goodbyes, and walk out the door. Wanda and Vision are just relieved that everyone survived. Wanda notes that they are an unusual couple — to which Vision more than agrees — given they have no anniversary and no rings. They decide to pick today as their anniversary, and Wanda then materialises rings for the two of them out of thin air.

As the two embrace and kiss, WandaVision episode 1 ends with Vision flicking a button. That pulls us out of the TV show to reveal that an unseen individual has been watching the events unfold on a literal TV, with the noise of helicopter wings in the background. It then cuts to the words “Please stand by”.

WandaVision episode 1 is now streaming on Disney+ and Disney+ Hotstar. New episodes release every Friday around 1:30pm IST / 12am PT.