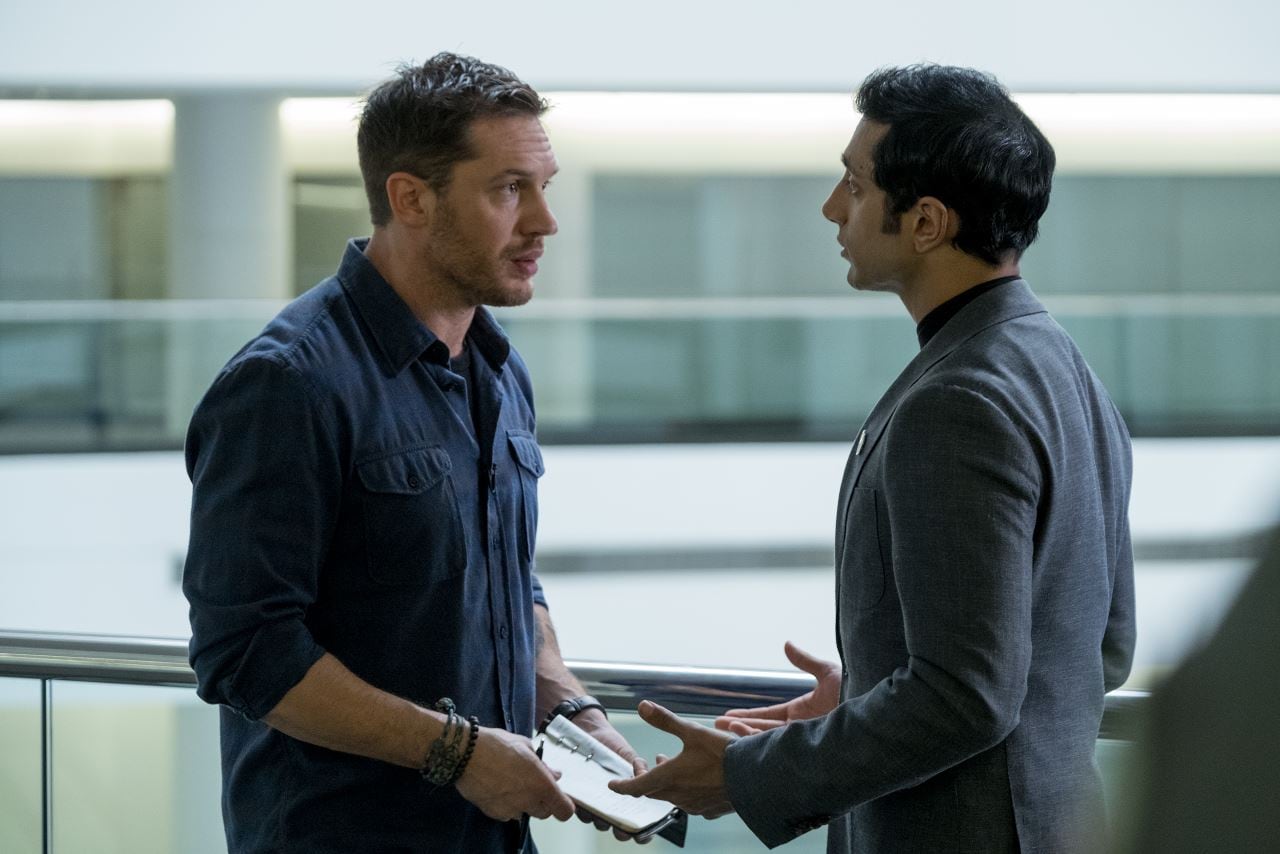 One of the many problems with Tom Hardy-starrer Venom — the Spider-Man spin-off with which Sony hopes to kick off its own Marvel universe — is that it spends too much time in bringing the titular symbiote to life. Voiced by Hardy in a loud, computer-modulated growl — and assisted by the goofy humour opportunities that the script provides in doses — Venom certainly has the potential to make for a good slapstick superhero movie, in the vein of Deadpool or Thor: Ragnarok. But the film has to also tackle the comic book's horror aspects, so it's good that Zombieland director Ruben Fleischer is at the helm. Unfortunately, Venom fails to do both well.

Hardy plays an investigative journalist named Eddie Brock, who covers the local beat in San Francisco. He hosts a show named after him for a network and has years of experience, but Brock is a terrible, unconvincing journalist. Tasked with doing a puff-piece with a genius, billionaire inventor named Carlton Drake (Riz Ahmed) who wants humans to live in space, Brock asks questions using confidential information he's not supposed to have, which gets his lawyer fiancée Anne Weying (Michelle Williams) and himself fired, and she dumps him. It makes you wonder how someone as naive got so far into their career.

Six months later, Brock is still down in the dumps while Drake has progressed to human trials with extra-terrestrial symbiotes that his spaceship found on a comet while travelling back to Earth. One of his employees, Dr. Dora Skirth (Jenny Slate), thinks he has gone a step too far and she reaches out to Brock, hoping he will expose Drake's illegal work. Initially reluctant, he eventually agrees to visit the company's headquarters, where he wounds up being taken over by a symbiote.

As he starts to hear voices, can't get his body to cool down, and is somehow always hungry, Brock naturally thinks he's fallen sick. He reaches out to his ex Weying for help, whose new boyfriend Dan Lewis (Reid Scott) is luckily a doctor. Meanwhile, Drake learns that Brock has stolen one of his symbiotes and dispatches his henchmen after him to get it back. These events form part of Venom's first hour and are dreadfully boring. It's only when Venom fully comes into play, helping Brock survive whatever comes his way while actively interacting with him in his head, that the movie shines for a few scarce moments.

Venom benefits heavily from having Hardy in the lead, who brings so much range and quality to each scene – at least when he's not being a reporter – that it feels like he's carrying the film. That's also partly because all the other characters are so severely underwritten, wasting a stellar supporting cast involving the likes of Ahmed and Williams. But as great as Hardy may be, he can't save the movie on his own. The other parts of Venom work against him as well, thanks to tonal and plot inconsistencies — at one point, it says symbiotes will always cause organ failure in humans but then get rids of the concept — and other issues.

For one, Fleischer and his editors commit the same mistakes as dozens of other Hollywood filmmakers before them: Venom makes heavy use of quick and excessive cuts during its uninspired, generic action sequences, which eventually dissolves into incoherence by the time the final set-piece rolls around. And Sony 's fear of the R-rating (the equivalent of ‘A' in India) — it has been rated PG-13 (U/A in India) — there's no blood or gore at all here despite Venom biting people's heads off or repeatedly talking about eating organs. Fox committed to the adults-only rating for Logan and Deadpool, and the films benefited from that.

It's unclear if Venom would even benefit from a less restrictive rating given its other problems. Plenty of superhero films, from The Dark Knight to Black Panther, have offered a mature take without being hindered by what they could show on screen. Fleischer is unable to transfer his Zombieland blend of horror and humour to Venom, which becomes an interesting allegory given the film is about a host and symbiote working together to figure out a balance that works for them both. Ultimately, Venom is neither here nor there, and its failure to be self-aware makes it feel like a movie from a different superhero era at times.

Before this, Sony had been trying to make a Venom spin-off movie for over a decade, ever since the character appeared in 2007's disappointing Spider-Man 3. The disasters of Andrew Garfield's The Amazing Spider-Man duology delayed its existence further, while the massive success of superhero films sharing the same universe, mainly thanks to Marvel Studios, prompted it to expand its ambitions. It's why Sony has plans of its own Marvel universe, with films for more characters — Silver Sable, Black Cat, Silk, and Morbius the Living Vampire among them — in the works.

When Sony ceded creative control to Marvel Studios on its biggest character Spider-Man, we were gifted with last year's thoroughly-enjoyable Homecoming. Venom is sorely missing that touch and experience, and somehow Sony keeps assembling creative teams that get it wrong time after time with Marvel properties. That might change as soon as December though, thanks to its next offering. What we have seen yet of the standalone animated entry Spider-Man: Into the Spider-Verse — it makes an unexpected post-credits appearance in Venom — seems to be a lot more promising than this "turd in the wind".