Thor: Love and Thunder Review: A Madcap Rush That Underuses Everyone

Taika Waititi throws everything at the wall, but not enough sticks. 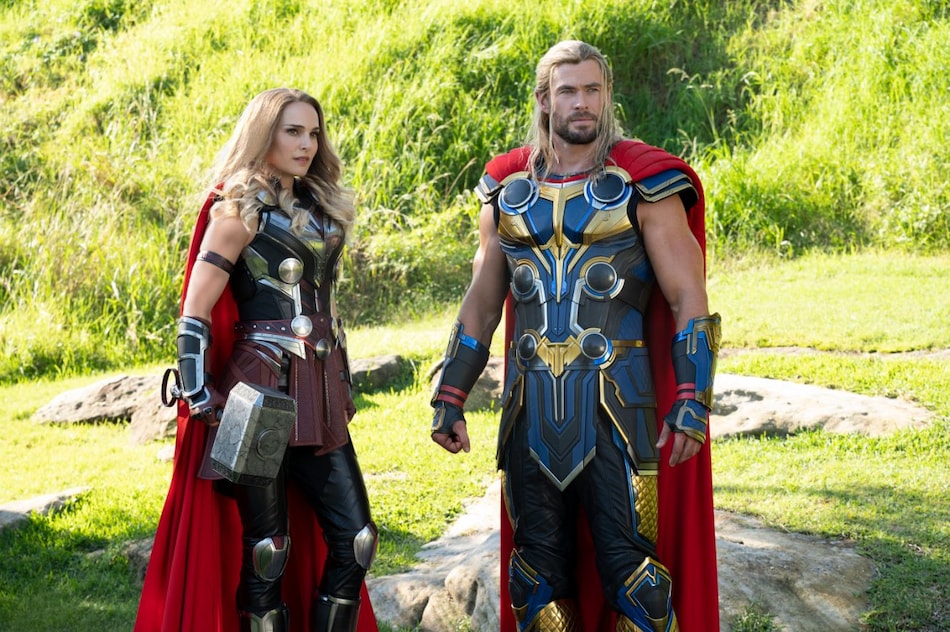 Natalie Portman and Chris Hemsworth in Thor: Love and Thunder

Thor: Love and Thunder — out now in cinemas — is simply too rushed. It's almost as if the old folks in charge of Warner Bros., the ones who ensured Justice League would be a disaster, temporarily took over Marvel Studios and mandated that writer-director Taika Waititi (Thor: Ragnarok) must fit his movie under two hours. The fourth Thor movie runs for 119 minutes, and that includes the usual lengthy Marvel credits. Look, don't get me wrong, I detest long movies, but given how much Waititi puts on his own plate here, Thor: Love and Thunder needed to be longer to do justice to it. Because as it stands, Thor: Love and Thunder suffers from narrative gaps, wild tonal imbalances, and weightlessness. More importantly, it under-utilises nearly every actor and character at its disposal.

At once a romantic comedy, a tale of a grieving father, a god devoid of purpose, a scientist trying to conquer death, a bored king looking for adventure, and a goofball trip through the cosmos, Thor: Love and Thunder tries to be about so many things that — many a time — it's about nothing. Just vibes and zingers. Even when the new Marvel Cinematic Universe movie does land in one of the aforementioned lanes, it feels like a bunch of different movies are competing with each other for screen space and runtime. And in the edit room, Waititi and his team of four (!!) editors — Matthew Schmidt, Peter S. Elliot, Tim Roche, and Jennifer Vecchiarello — have somehow cobbled together those disparate stories in the best way they possibly could, pasting them on each other with Fevicol or something.

Waititi tries to save the day — constantly — via humour, but alas, not even a pair of screeching goats, a jealousy-driven love triangle between Thor and his two metal armaments, or Russell Crowe doing a hammy Greek-accented impression of an orgy-obsessed Zeus can distract you away from Thor: Love and Thunder's problems. Ultimately, this is a movie that is mighty short-changed in the character department. And of course, regrettably, Waititi's other problems continue. His handling of action sequences has not improved in the least. Shot in a chaotic manner in front of drab CGI-heavy environments, and edited in an even poorer manner with nostalgic needle drops slapped on top, Thor: Love and Thunder delivers some of the most instantly forgettable action beats in a MCU movie.

Everything You Need to Know About Thor: Love and Thunder

Picking up from the end of Avengers: Endgame, where Thor Odinson (Chris Hemsworth) joined up with the Guardians of the Galaxy — Chris Pratt and Co. show up for a few minutes, mostly to stand around — Thor: Love and Thunder finds a drifting Thor looking for his next adrenaline hit. But Thor is undeniably full of himself and fails to see that the Guardians have grown tired of him. So when Thor learns that a guy nicknamed the God Butcher (Christian Bale, from The Dark Knight) has New Asgard next on his list, the Guardians see it as the perfect excuse to go their own ways, leaving behind Thor, his rock expository friend Korg (Waititi), and the two new giant goats they were gifted. But as Thor returns to (New) Asgard, he's reunited with two exes: Mjolnir, and Dr. Jane Foster (Natalie Portman).

What is Jane — who's been missing from the MCU since 2013's Thor: The Dark World, given her presence on Endgame relied on unused footage — doing in New Asgard? As has been known for three years now, Portman returns to wield (a reforged) Mjolnir as the Mighty Thor. Suffering from stage four cancer, Jane finds herself being called to Mjolnir, whose broken pieces are on display for tourists in New Asgard. But Thor: Love and Thunder is so eager to move onto its plot beats that it skips over some important bits here — what's it like to suddenly turn into a superhero? How do Asgardians feel about this new Thor? — including where she came up with the “Mighty” to tack onto it. Instead, the new Marvel movie is more interested in Jane trying to find the right catchphrase. What?!

But believe it or not, Portman's arc is possibly the most fleshed. Promised a queer arc at San Diego Comic-Con three years ago, Tessa Thompson — third billed — ends up being thoroughly wasted as New Asgard king Valkyrie. She's relegated to a side role, and the “acknowledgment” of her bisexuality ends being her kissing a woman's hand. Sheesh, Taika, we expected better from you. Even Bale — second billed — feels underused, existing more as a driver of the plot, rather than a living breathing character who's got things to do. He opens the movie with heavy existential themes, but then remains offscreen for large portions of Thor: Love and Thunder. A sympathetic villain is a wasted villain if he's not central to the story being told.

Shamshera to Thor: Love and Thunder, the 7 Biggest Movies in July

Others have been chopped from the movie altogether. Jeff Goldblum and Peter Dinklage were expected to return in their respective roles as Sakaar's hedonistic ruler Grandmaster (from Thor: Ragnarok) and the giant dwarf weaponsmith Eitri (from Avengers: Infinity War), but their scenes were cut. Game of Thrones' Lena Headey also had a role on Thor: Love and Thunder, but she too has been left on the cutting room floor. Characters who do exist have lost “whole sequences” between one another, with Portman acknowledging this ahead of release, and joking that there's enough material left out between her and Thompson that could be turned into a Valkyrie and Mighty Thor spin-off. This results in a choppy film, one that loses its flow as a result.

Hemsworth, meanwhile, finds the balance with his near-cartoonish show-off who's full of himself. It helps that he's given more to work with — by Waititi and his co-writer Jennifer Kaytin Robinson (Sweet/Vicious) — than anyone else on Thor: Love and Thunder. Not only can he handle the bombastic proclamations that gods of his stature must deliver, he's equally capable when it comes to the comedic aspects of his character. A lot of the comedy comes from how Waititi frames Thor's relationship with his weapons — with Stormbreaker feeling jealous, acting out, and not okay with how happy Thor is to see Mjolnir. And as with on Ragnarok, Hemsworth plays into Thor's vanity and insecurity, regularly turning himself into the butt of the joke across Thor: Love and Thunder.

Waititi does his best to complement Hemsworth's comedic chops, via the script or Korg's dialogues and narration — a character he himself plays. The space goats land one of the biggest laughs — by becoming the butt of the joke — and a throwaway domestic labour comment is well-aimed, landing perfectly in a mid-film montage that encapsulates how Thor and Jane's relationship burned out. But a recurring joke around Korg forgetting Jane Foster's name feels like an outtake, and instead reads like unintended meta commentary on how Waititi's previous Thor movie completely forgot Portman's character.

But Waititi fails — bigger — elsewhere. The director has spoken about how Thor is going through a mid-life crisis, but though Thor: Love and Thunder sets it up, it's casually brushed aside for “more interesting” hijinks. Instead, it feels like the Thor franchise is going through a midlife crisis, struggling for new purpose in the wake of its titular hero being put through the wringer on Infinity War and Endgame. Where do you take a hero who has seen it all, the lowest of lows and the highest of highs?

Moreover, once again, the MCU has ended up with a villain who's saying the right things, but just going about it in the wrong manner. Gorr's primary argument is that the gods do not care about anyone other than themselves. And then, Thor: Love and Thunder goes on to show that most gods are glib, goofy, and full of themselves. They have no interest in helping those that pray fervently in their name. And when faced with a grave danger, they are more than happy to hide in their cocoons. Maybe all gods should die?

The bigger problem for Thor: Love and Thunder though is that it's unable to handle the many movies it needs to be. It inelegantly switches from being a self-aware comedy to a poignant romance, from grim tragedy to a boisterous adventure. Waititi more or less pulled it off on Ragnarok — the action sequences were still an issue — but he's unable to catch lightning in a bottle again. Thor: Love and Thunder is a Waititi film in-and-out, except we now have an expanded understanding of that term.

While Waititi must absolutely be credited for turning around the Thor franchise — kudos to Hemsworth that he's floated seamlessly over into the new role asked of him — the writer-director is playing his greatest hits here. That's reflected both in the soundtrack that feels tacked on, and the return of Matt Damon and his fellow Asgardian thespians for a round two of the stage play. When you've seen them once before, they don't quite hit with the same impact. And ultimately, there's just not enough love and thunder in the fourth Thor movie.