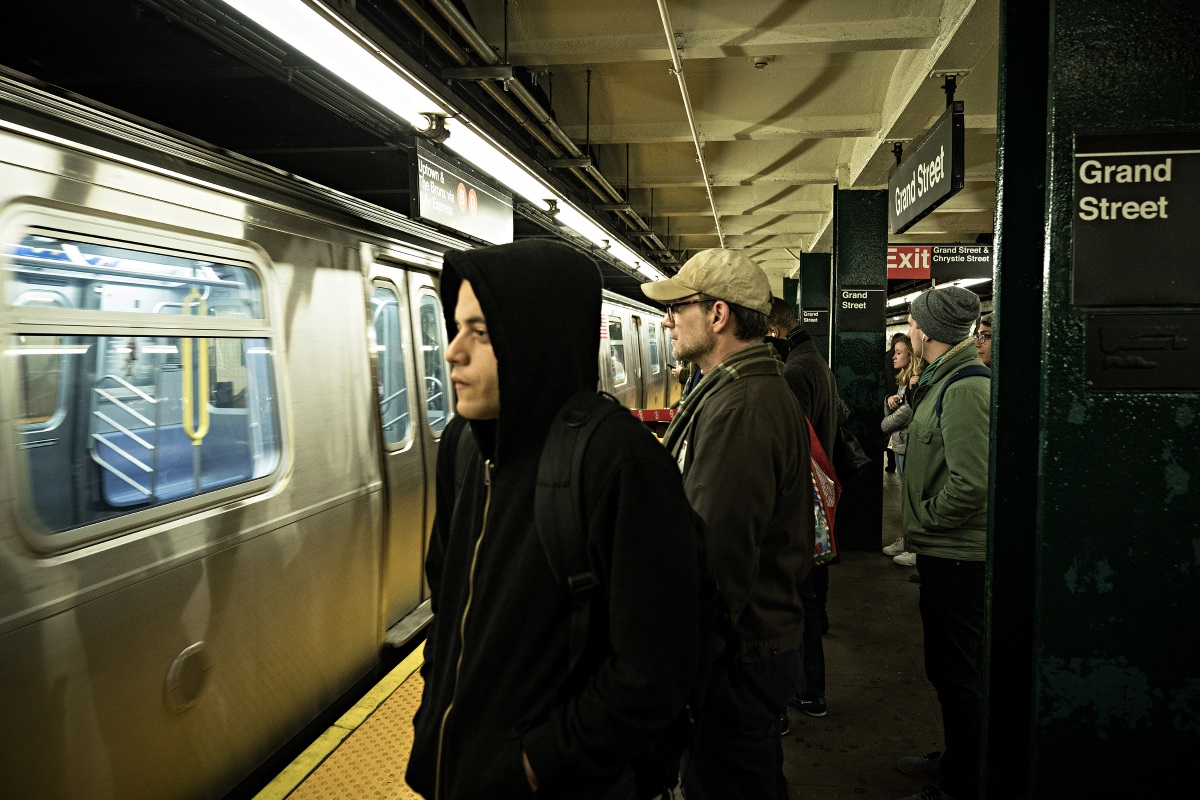 Roughly midway through the Mr. Robot season 4 premiere, the titular imaginary character (Christian Slater) tells his other half of the brain, Elliot Alderson (Rami Malek): “This used to be about saving the world. You're making it too personal. You're making it about Angela.” Of course it's personal for Elliot. Angela (Portia Doubleday) was his childhood friend and her death weighs on him. He might have said otherwise to his coked-up sister Darlene (Carly Chaikin), but that's only because he's trying to protect her. It's why he didn't show her the photographic proof of Angela's death, which splashes across our screens for a split second in Mr. Robot season 4, episode 1 “401 Unauthorised”.

But Elliot's personal quest for vengeance comes with its own troubles, naturally. He waves away Mr. Robot's concerns that he's letting his feelings cloud his judgement and marches up straight to the front door of the person they're after, one John Garcin, who could help them hack the (fictitious) Cyprus National Bank. That's the bank Whiterose (BD Wong) — the Dark Army leader who's also the Chinese Minister of State Security, Zhi Zhang — has been using for her financial dealings. For what it's worth, Elliot has a fair counterpoint in that they don't have the time to properly hack Garcin, because they are as good as dead once Whiterose ships her mysterious project to Congo.

Moreover, it gets worse the more she gets away with, Elliot argues. Their new aim this season — Mr. Robot's final — is to take down the top 1 percent of the top 1 percent, and that won't happen if they allow the likes of Whiterose to do as they please. Elliot says it's not about his feelings as Mr. Robot claims and that's he done with therapy. He's just exhausted. (That makes sense considering the show's events are still taking place in the year of 2015, when Mr. Robot debuted. Season 4 opens in October with Angela's death before jumping two months ahead to the Christmas period.) As you'd expect from a show such as this, Elliot's urgency spectacularly backfires as they are caught in a honeypot devised by the paedophile lawyer they blackmailed, Freddy Lomar (Jake Busey).

The changes in Elliot's demeanour, mindset, and approach have a corresponding effect on Mr. Robot's visual and aural language as well. The big one is that Elliot isn't talking to the audience anymore. There's no narration for much of the first episode of the fourth and final season, before Slater's Mr. Robot takes over, and offers his view on Elliot's emotional condition and of the world. The stranger tweak is Esmail's embrace of much more conventional cinematography in Mr. Robot season 4. That might not seem surprising but for a show that made placing characters in corners and looking out of the frame a style into itself, this is unexpected. There are still some flourishes in terms of transitions but very little outside of that.

Mr. Robot season 4, episode 1 is also largely focused on Elliot and his pursuit of Whiterose, with a brief inclusion for Darlene, who spends the episode high on drugs. (Tyrell Wellick (Martin Wallström) makes an even briefer appearance, now an E Corp stooge being made to do PR work.) Elliot meets with her at his home after she contacts him, who then claims she saw the dead Angela roaming around New York. Not wanting to break her heart, Elliot doesn't bring up the photo Whiterose sent him of Angela's blown-out brains, which hurts his ability to convince Darlene that Angela is really gone and that it's not their fault. It doesn't help that he lashes out at her for being high. Later in the episode, a broken down and depressed Darlene consumes even more drugs at a party at her house, before telling everyone to get out and leave.

Speaking of depressed characters, Dominique “Dom” DiPierro (Grace Gummer) is now living with her parents and perpetually paranoid of what's going on around her, now that she's been forced to work for the Dark Army. (Dom is also the only character with a sizeable part in the season 4 premiere, except Elliot.) Seeing a white van outside her place, a visibly-ruffled Dom pulls a gun on a plumber, thinking he's been sent by the Dark Army. The plumber's horrified face and the cheeriness of Dom's mother creates some of the only comedy in the first episode. Of course, it's not strangers you've to worry about on Mr. Robot, but people you know.

And that turns out to be her mother's friend Janice (Ashlie Atkinson), a taxidermist who's much more than she lets on. Janice tells Dom to get on with the case involving her former boss Ernesto Santiago (Omar Metwally), who was killed by Dark Army fixer Irving (Bobby Cannavale) at the end of Mr. Robot season 3. That was the event that put Dom under Whiterose's thumb. Dom has clearly been trying to put off work, what with Dom still being in bed around noon, as her mom reveals, which in turn prompted Janice's visit and the vividly-described threat to her family.

The Dark Army is seemingly everywhere — or so it's made to seem — as some of their men, who captured Elliot from the aforementioned honeypot, plan to kill him with an intentional overdose of heroin. (It's here that creator, writer and director Sam Esmail himself cameos as he utters “Goodbye, friend” before injecting Elliot.) As Elliot passes out, the past three seasons flash before his eyes, before we cut to black. But it's a fake ending as with the fake Dark Army men, who turn out to be working for E Corp CEO Phillip Price (Michael Cristofer). It brings the episode full circle as the father who had to see his daughter Angela killed at the start puts his own Whiterose vengeance plan into motion, which involves her best friend: Elliot.

Price doesn't reveal how he knew about the Whiterose honeypot, except to close out with a few choice words: “Welcome back, Mr. Alderson.” It's directed towards the protagonist as much as it's meant for the audience, obviously. Welcome back indeed, Mr. Robot.