Spoilers ahead for The Mandalorian Chapter 12: The Siege. 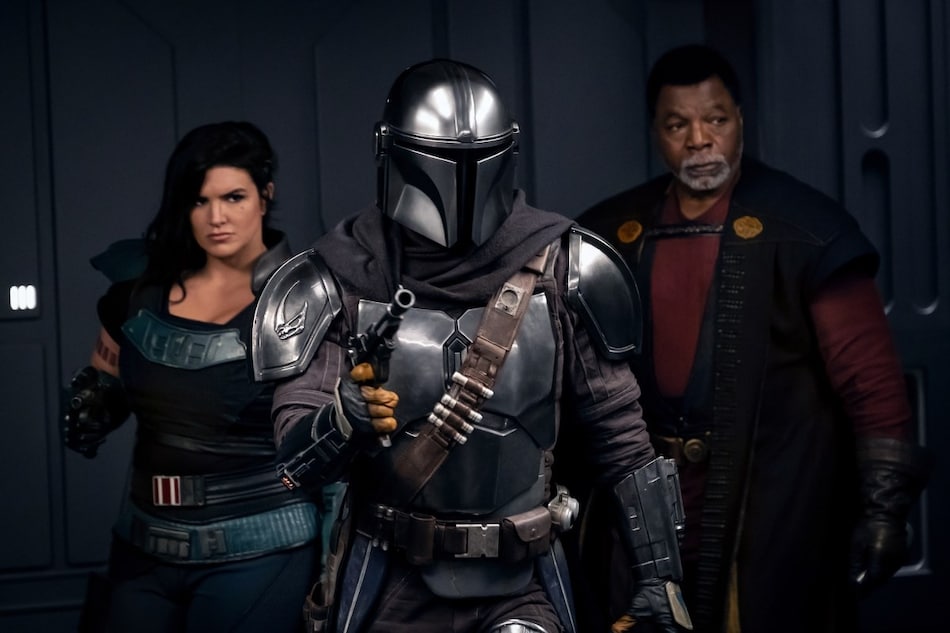 The Mandalorian season 2 episode 4 — titled Chapter 12: The Siege — might seem like another detour initially for a show that has a penchant for hitting the narrative breaks, but it turns out to very much have a purpose. For its early run, the sophomore run of the Star Wars series had essentially forgotten what transpired in all of season 1, and proceeded to expand its world. (That's mostly a good thing, mind you. Except when those detours don't add to the show.) But the latest episode not only adds to The Mandalorian's main plot, it also brings back all the other main cast members. Until now, we've only had the leading duo of Mando (Pedro Pascal) and Baby Yoda.

It includes nearly everyone who matters — and then one. Mando's allies, Cara Dune (Gina Carano) and Greef Karga (Carl Weathers), have made many changes to Nevarro, the planet that was a major setting for season 1. Cara has become the Marshal, and Karga the Magistrate. One restoring law and order, the other looking after clerical duties. For Cara, at times, that includes dealing with pretty scum in the bid to return things that that belong to their rightful owners, and making some furry friends along the way. Mythrol (Horatio Sanz), the blue alien who was Mando's bounty in the pilot episode, is now helping Karga with the books, in what is basically servitude.

Their return to The Mandalorian is welcome, as is the reunion between them and Mando, evinced by the large smile on Cara's face when Mando lands on Nevarro. He had set out for Corvus, having finally learnt where he could find a Jedi — one named Ahsoka Tano, Anakin Skywalker's Padawan, which means nothing to Mando but a whole lot to Star Wars fans — but the Razor Crest was in no shape to make the journey. And it didn't help that Mando needed to rely on Baby Yoda to switch up some wires, which was never going to work out. It reminded me of the Baby Groot nuclear bomb scene from Guardians of the Galaxy Vol. 2, except the stakes were much lower here. Baby Yoda still did get shook literally, and that's not nice parenting, Mando.

Having (not) served his purpose, Baby Yoda is put in a school classroom on Nevarro to be babysat, while Mando, Cara, and Karga discuss business. (Incidentally, this school is in the same place that was heavily fired upon by Moff Gideon's Imperial men.) Given he has little to no understanding of the common tongue in the Star Wars galaxy, Baby Yoda has his eye on more important things: food. A classmate of his is snacking on some blue biscuits, but he refuses to share after Baby Yoda politely puts his hand out and coos. Of course, the Child must have what he wants, and he turns to using his telekinetic powers — the first successful attempt on The Mandalorian season 2, I believe — to steal them. Baby Yoda 1, classmate 0.

Meanwhile, Mando is curious what this business is, because he would like to get back into his ship as soon as possible. Cara and Karga has their eye on an Imperial base, which they would like to wipe out to restore peace to Nevarro. And naturally, they need Mando's help. Under creator and writer Jon Favreau, this is the basic setup of The Mandalorian — he arrives somewhere and people need his help — one that it can endlessly rinse and repeat as long as it's fun to watch. But what Karga believes to merely be a forward base with a skeleton crew turns out to be a well-guarded laboratory.

That serves a gateway to bring back another season 1 character, Dr. Pershing (Omid Abtahi) — albeit via a hologram message — who is shown in the opening recap to remind viewers who he is. On Gideon's instructions, Pershing has used the blood he drew from Baby Yoda for unexplained experiments on other beings that have largely failed. This is where The Mandalorian season 2 episode 4 reveals its importance. Pershing promises that he won't fail Gideon again, which indicates that these biological experiments are part of Gideon's plan, and why he was after Baby Yoda in season 1.

At one point, Pershing says he “doubts we'll find a donor with a higher M-count”. This could only be referring to midi-chlorians, the microscopic life forms that are the conduit for the Force in Star Wars.

This spooks Mando, who leaves the fighting party to pick up Baby Yoda from school, while the rest of them — Cara, Karga, and Mythrol — fight their way out. That kicks in an extended action sequence, which begins on foot before turning into a chase scene. It's exciting from start to finish, with Weathers — who is the director on Chapter 12: The Siege — delivering some nice touches to The Mandalorian's core: action. It's present in how they hear the TIE fighters first before they appear on radar, how the sound barrier is broken when the Imperial base explodes, and when Mando flips his Razor Crest mid-air after taking out a TIE fighter.

And like others before him, Weathers also knows how to use Baby Yoda as the perfect audience surrogate during fight scenes. Mando is a joy to watch in combat, be it fistfights or in the air, and so when the Razor Crest comes out of the blue to aid the others, we're naturally pumped for it. And as the Mando chases after the TIE fighters, our collective exhilaration and giddiness is etched across Baby Yoda's face, who is thoroughly enjoying the free falling and spinning inside the Razor Crest, all while he munches on more of those blue biscuits. But all that g-force has its consequences too. After the ship stabilises out of combat, Baby Yoda pukes out the biscuits he ate earlier.

With the job done, Mando heads for Corvus once again to find Ahsoka Tano. Shortly after, the New Republic — the same patrol from The Mandalorian season 2 episode 2 — shows up on Nevarro, having seemingly learnt of the Imperial base being destroyed. Karga feigns ignorance and when he's pressed on the Razor Crest's presence, he claims the transponder is too old and faulty. Stuck with no answers, the New Republic pilot tries to get Cara to join their ranks. She's lost too much back in the day; she's from Alderaan, and everyone she knew was blown up by the Death Star in one swoop. The pilot nevertheless leaves a New Republic badge as a reminder, if she ever wants to join up.

Are they Death troopers or something new?
Photo Credit: Disney/Lucasfilm

Cut to an Imperial starship, where a junior officer reports to Moff Gideon (Giancarlo Esposito) — this is his first appearance in the flesh on The Mandalorian season 2 — that they have managed to install a tracker on the Razor Crest, Mando's ship. It was one of Karga's “best people”, clearly he needs to inspect them well. Anyway, Gideon lets out a tiny smirk and turns around to reveal his plan for Mando, which involves a lot of new kind of troopers. They look like Death troopers at first glance, but I could be wrong here. Halfway through the season, we'll find out sooner rather than later.