With Daniel Craig, Chris Evans, and Ana de Armas in the lead. 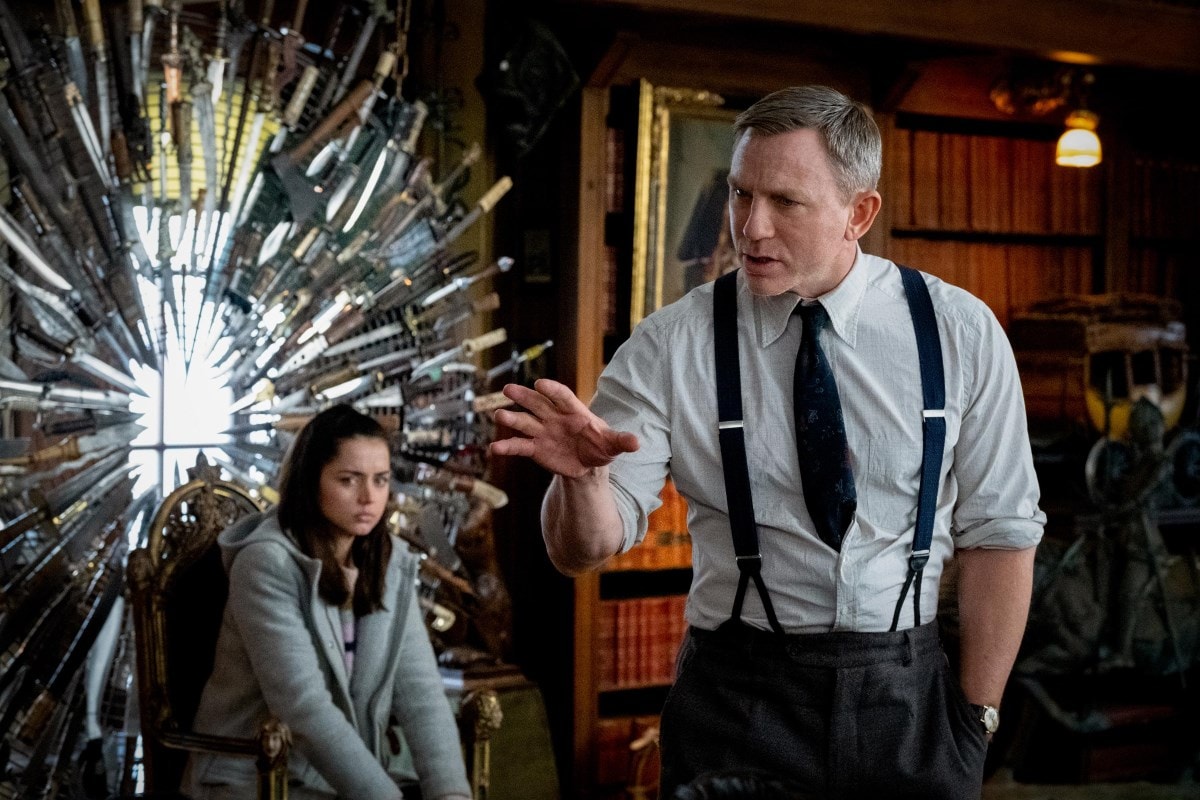 After the critical and commercial success of Star Wars: The Last Jedi nearly two years ago — a galaxy to which he will soon return with an all-new trilogy — wherein he spent years crafting a subversive take on the long-running franchise under the watchful eyes of Lucasfilm, writer-director Rian Johnson shuffles back to his pre-epic space opera roots with Knives Out. Think of it as a modern-day take on the murder mystery whodunnit genre, a homage to the works of Agatha Christie, as Johnson has readily admitted. Except he thinks the least interesting part of a whodunnit is whodunnit, which is why Knives Out is really more of a commentary on American society at large in 2019.

It's the kind of film that works best if you know nothing, so we would advise you to come back after you've seen it, even though there are no plot spoilers below.

Still here? Let's do this.

Knives Out centres on the dysfunctional extended family of a wealthy and famous crime novelist named Harlan Thrombey (Christopher Plummer), who is found dead the morning just after his 85th birthday, an occasion for which Harlan had gathered all of them. That pulls in the local police to investigate, who think it's an open-and-shut-case of a suicide, but the anonymous hiring of renowned private investigator Benoit Blanc (Daniel Craig) makes matters intriguing. Enter the traditional questioning scene, which not only introduces us to the rest of the family but more importantly, gives us a window into their perspectives on the events and a possible motive for the patriarch's murder.

There's eldest daughter Linda (Jamie Lee Curtis), a real estate mogul who brags about being “self-made” even though she had considerable financial support. On the day of his birthday, Harlan confronted her husband Richard (Don Johnson) because he's cheating on her. Linda and Richard's son, Ransom (Chris Evans), is a jerk who's never worked a day in his life. Harlan's daughter-in-law Joni (Toni Collette) is a lifestyle guru akin to Gwyneth Paltrow and her quack “lifestyle brand” Goop. Her own daughter, Meg (Katherine Langford), is a self-righteous social activist. Harlan's youngest son, Walt (Michael Shannon), has only one job: to publish his dad's books. And there's Walt's son, the alt-right Internet troll Jacob (Jaeden Martell).

Get Free PVR Tickets to Knives Out With This Subscription

But that's not everyone. Harlan had a private nurse in Marta (Ana de Armas) to take care of him. For Blanc, what makes Marta unique is that she is the only one who didn't have anything to gain from Harlan's death. Everyone else in the Thrombey clan were desperate for the wealth they were going to inherit. This makes Marta the moral heart of Knives Out, and Johnson takes that up a notch by concocting a device: a regurgitative reaction to not telling the truth. In plain English, if Marta lies, she vomits. Sure, Johnson does play with it a little to give himself breathing room but on the whole, it ensures that Marta can never waylay the audience. It's both fun and clever.

There's another good reason for putting Marta at the centre of Knives Out. Through her, Johnson can hit at the faux liberal nature and performative niceness of the Thrombeys. They might claim that they love Marta and would always take care of her, but no one in the family really knows which South American country — everything from Ecuador to Paraguay to Uruguay is thrown out — she is from. That speaks to both their apathy and inherent xenophobia, which is also brought out in the mildly-inebriated post-dinner conversations. It also speaks volumes that Marta is a good-hearted daughter of immigrants in a film about high-society schemers always ready to pull an about-face.

It helps that Armas — best known for playing the AI hologram Joi in Blade Runner 2049 — delivers her career-best work on Knives Out, getting you to instantly connect with her. And she's surrounded by an excellent ensemble from Lee Curtis to Collette, who get the chance to hit a different note than most of their recent roles. Fresh off hanging his Captain America shield, Evans really charms his way in as a jerk who loves the attention. And Craig, in a Kentucky Southern drawl for which he's mocked by Ransom as “CSI: KFC”, gets to go down a much different route than the stiff spy he's known for playing. His all-seeing eye makes him the natural audience surrogate, as he guides us through the clues.

In turn, Johnson helps his actors' performances by supplying them with some delicious lines and exchanges, which poke fun at the hollowness of the American self-made myth and revel in the ugliness of the Thrombey family dynamics among other aspects. In one scene, the latter helps deliver a bit of truly-fitting comeuppance that audiences desire for these two-faced individuals. And in other places, the delight is simply in how the actors ruminate over their own words, including when Blanc draws a food-based analogy to the murder investigation, claiming there's a donut-shaped hole at the centre of it. Later, when a piece of information — a ‘donut' — fills it, he remarks that it too has a donut-shaped hole inside it. Yes, well, that's how donuts work.

Knives Out is powered by one of the most talented casts you'll ever see — there's a role for Lakeith Stanfield, whom we didn't even mention — who seem to be having the time of their lives, and carries a strong socio-political message about how immigrants are perceived today in America, both implicitly and explicitly. Some of it is superficial, though. It's also a well-made murder mystery movie, which crafts tension in expectedly — and at times, unexpectedly — hilarious ways, alongside a penchant for style. Its only fault is that it takes time to get going after an initial rush and has a few stumbles in the middle, but those are excusable given how it picks up in the second half as the twists come snowballing in.

The wonderful thing about Johnson is that his films come from a place of admiration for the genre, and that he's willing to push the boundaries on what they have been about. He toyed with The Last Jedi because he loved the franchise, and he stood by his decisions even as he got a lot of hate from a vocal subset of Star Wars fans. With Knives Out, Johnson throws out a story that Christie would have appreciated, but he makes sure to go that step further to subvert it. Hopefully, he will keep returning to Earth for such sojourns as he plans his long-term trip to a galaxy far, far away.

Knives Out is now playing in cinemas worldwide.