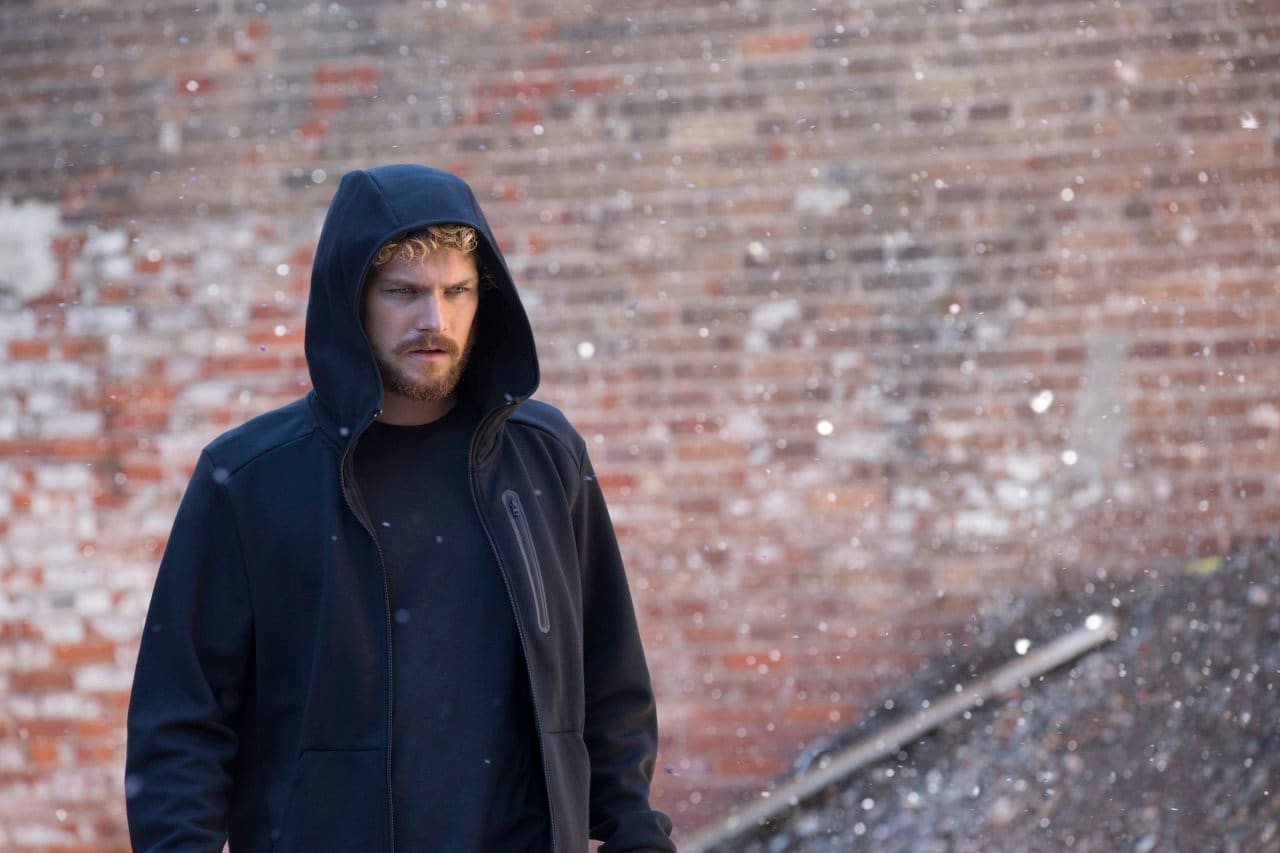 The problems with adapting Iron Fist – a Marvel comic series that follows a white man learning from Asian culture, and becoming the best among them – for screen were quite evident from the beginning. (Then again, Doctor Strange did it last year, and people didn't seem to mind too much once the movie came out.) The character had his origins in the 1970s, when such a portrayal barely raised any eyebrows from anyone, and the US was still at war with Asian nations, but in 2017, it feels badly out of place.

Add to that Marvel's own efforts on other shows. In the comics, Jessica Jones had never been part of The Defenders, and on Luke Cage, the cast and crew were largely African-American. Both signalled a step towards greater diversity from Netflix. In contrast, the announcement of Iron Fist was met with scepticism and hostility from the community, which was further baffled when Finn Jones (Game of Thrones' Loras Tyrell) was cast in the titular role.

As defence, showrunner Scott Buck (Six Feet Under, Dexter) assured us that Danny Rand (Jones) was no white saviour in his vision of the show. “He's trying to save himself, if anything,” Buck said. Jones himself echoed that in an interview with Buzzfeed, and added: “What you'll find with the way that we're telling this story is we're addressing the issues that people are very concerned about in a very intelligent and modern way.”

Sadly though, after having seen the first half of Iron Fist's season one, it's clear to us that the twin powers of Marvel and Netflix have failed in delivering a cohesive answer to that, be it in representation or culture appropriation. What's much worse, though, is that Iron Fist fails to even resemble an entertaining show.

At the heart of the new Netflix drama is Danny Rand, a martial arts master who returns to his home in New York City, fifteen years after being presumed dead in a plane crash with his parents. Instead, Danny turned out to be the lone survivor, and was taken in by Buddhist monks of K'un-Lun, which we're told is one of seven Capital Cities of Heaven, and exists in another dimension. It appears only once every fifteen years in the Himalayas, which is incidentally where the Rand family was travelling at the time.

After losing his parents, Danny trained in martial arts, and emerged as one in a long line of Immortal Iron Fists. For reasons untold, he left K'un-Lun, and came back to New York. But Danny is no mere commoner; his father was the co-founder of Rand Enterprises, a multi-billion-dollar company that dabbles in everything from pharmaceutical drugs to agriculture machinery. At the start of the show, Danny arrives unshaven, and in tattered clothes, hoping for the clichéd homecoming where everyone welcomes him with open arms.

Instead, the world has moved on without him. Rand Enterprises is now run by Ward (Tom Pelphrey) and Joy Meachum (Jessica Stroup), two of Danny's childhood friends. But they refuse to acknowledge that Danny is who he claims to be, and do everything in their power – Ward sends his goons after him; Joy drugs him, and has him institutionalised – to make him go away for good.

Danny, for his part, must deal with the frustration of his homecoming gone awry, as he's forced to deal with his old friends, the Meachums, who are unrelenting and unwilling to part with majority share of their company. All he really wants is to feel part of a family again. It's a big focus for the show's early episodes, and it can frankly feel as unnecessary as it is boring. Danny also keeps harkening back to the demise of his parents, as he seems to be still reeling from the trauma resulting from that ill-fated flight. During its initial few episodes, Iron Fist seems to have nothing to say about Danny's 15-year-stay at K'un-Lun – be it the people he must have known, and the memories he made with them. It's one thing to keep the mystery alive for later in the season, but the simple lack of background plainly shows that not much effort was put into that aspect.

Moreover, where the other Marvel-Netflix shows were able to shine with their street-level hero concept, highlighting the struggles of regular folk trying to do some good, that aspect is fully locked-up for Danny. Even as he states that he learnt to give up materialistic possessions in K'un-Lun, his privilege displays itself in a number of ways. He drives around in an Aston Martin supercar, is still oblivious to what the word 'take-out' really means, and his misguided attempts to infuse compassion into the company's dealings kick off little storms, and subplots, that are each as uninteresting as the next one.

It doesn't help that Jones seems ill-equipped to bring the inner turmoil of a hero grappling with his destiny to life, unable to infuse gravitas through his facial expressions or dialogue delivery into concepts that are meant to be taken seriously by its intended audience, whether it be him talking about the “Order of the Crane Mother”, or grappling with the duty, and the path laid out for him by his K'un-Lun masters. By contrast, Charlie Cox in Daredevil, and Mike Colter in Luke Cage effectively channel their conflicting emotions, as they figure out how to set things right while sticking true to their cause.

The bigger culprit, by far, is the writing itself. With Iron Fist, Buck and the team seem to be interested in exploring the idea that even the most fearless of warriors (as Jones repeatedly claims to be during the series) isn't fully convinced of the role he has won for himself. But those two ideas don't gel at all, leaving behind a befuddled mess that feels too incoherent. In one instance, when a character questions Danny on how he can be so confident, he says it isn't confidence, but rather that “doubt leads to death”. It's meant to come across as him remembering his teachings, but it can easily be read as conceit.

Much of the supporting cast too isn't helped by the boilerplate corporate storyline handed to them. Both Joy and Ward seem under-utilised having to handle the ripples generated by Danny's return to Rand Enterprises. In fact, the entire office storyline is possibly the most off-putting part of Iron Fist, as it does hardly anything to enrich Danny's journey back in our world, and serves as padding for the story.

That leaves Colleen Wing – played by Jessica Henwick, Game of Thrones' Nymeria Sand – a Japanese-American sensei who owns her own dōjō in New York's Chinatown neighbourhood. She's a strong female character, who's unwilling to compromise on her principles of honour, but her inability to keep the lights on has her in a bind. Through that angle, the show can explore the themes that resonated in other Marvel adaptations. Wing's personal journey is much more captivating; her initial reluctance in being caught up in something bigger is more believable, and her uncovering and acceptance of who she truly is, makes for a better protagonist for a TV drama, much unlike the title character. Henwick's portrayal is effective, and she brings Wing to life in a relatable fashion. Unfortunately, the good work is cut down by the writing again, be it Danny's assumption at first meeting that she must speak fluent Mandarin because she teaches martial arts, or when he tries to coach her in the ways of kung fu.

Marvel's Iron Fist: Behind the Scenes Look at the Action, Costumes, and the Sets

All of that isn't helped by the show's glacial pace over the first half of the season, more so during the first two episodes, in what seems another instance of Marvel and Netflix agreement on 13 episodes for all standalone shows becoming a hindrance to good storytelling. A smaller season would've helped the writers (and the editor, in turn) immensely, and prevented the inclusion of scenes that drag the show down, and suck any life out of it. Instead, the Iron Fist pilot is one of the most boring things that we've seen in recent times, and makes a strong case for Netflix to reconsider its TV-greenlighting model, which gives creators full creative license to design the series, rather than come up with a pilot that's tested for success.

Iron Fist never manages to earn its self-serious badge too, unlike the much-grittier Daredevil that delivered a combination of powerful acting and direction, with dollops of bone-crunching fights, for a winning combination in the first season. Even in the latter regard, the show fails to inspire with its fight choreography, save for a few scattered sequences, the first of which doesn't appear until the third episode.

As a series, Iron Fist is just downright disappointing, and its handling of representation further adds to that trouble. After Finn Jones got into an online debate over the same, he deleted his Twitter account momentarily, and then returned less than a day later. In a statement, he said: “We have gone to great lengths to represent a diverse cast with an intelligent, socially progressive storyline. I hope people can watch the show before making judgements.”

Well, having seen the show, it's safe to say that Iron Fist barely does anything to bring the character into the 21st century. It fails to engage on any level, and brings nothing new to the superhero genre, that's been recently populated with the likes of The Lego Batman Movie, Legion, and Logan. Iron Fist would have massively benefited from retooling the character's journey, and having Asian-American people on not just its cast, but its crew. That's what made Luke Cage so rich, because it directly involved the people who understood their culture.

But as it stands now, Marvel's Iron Fist is not just the worst of the Marvel-Netflix lot, but an abject failure.

HPE to Buy Nimble Storage for $1.09 Billion
Lodhi Garden in New Delhi to Get Free Wi-Fi Services in April