A focus on Bollywood’s dark underbelly takes away from the intriguing central idea. 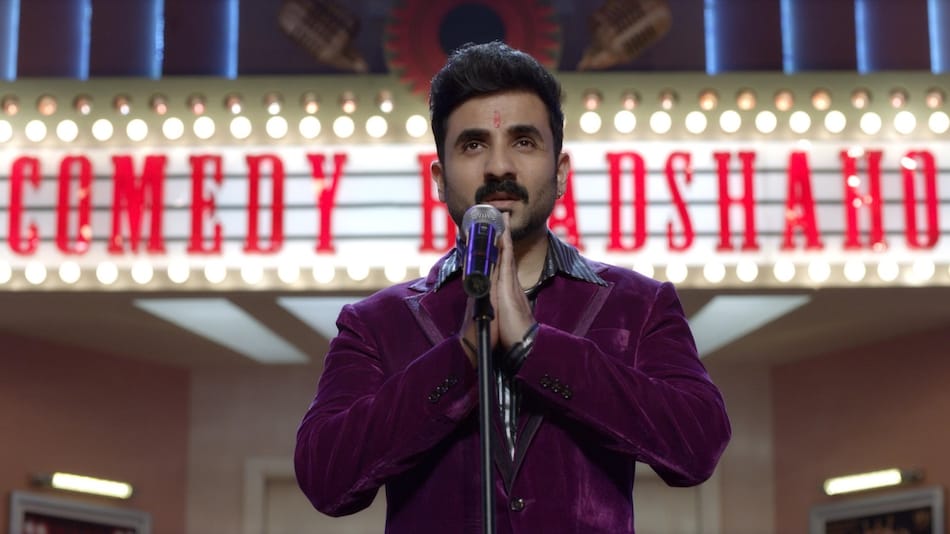 At its core, Hasmukh — Netflix's newest series from India — is about a small-town stand-up comedian called Hasmukh Sudiya (Vir Das), who's trying to make it big in the country's entertainment capital, Mumbai. But he's not like other struggling comics. Hasmukh can only perform well after he's taken someone's life, with the fear of being in a life-or-death scenario helping him overcome stage fright. That's a fantastically absurd premise for a black comedy. Except Hasmukh throws in a bunch of other ingredients that revolve around the many ills of the film industry. It fills the screen with sleazes, molesters, and criminals, but it can't do justice to any of them because it's trying to service them all. More importantly, in doing so, Hasmukh loses itself along the way.

Created by Das and Kal Ho Naa Ho director Nikkhil Advani, the Netflix series' broth also suffers from a case of too many cooks. There are five to six credited writers across Hasmukh's 10-episode run: Das, Hasmukh director Nikhil Gonsalves (P.O.W. Bandi Yuddh Ke), Suparn S. Verma (Aatma), Amogh Ranadive (Jestination Unknown), lyricist Neeraj Pandey (Kaamyaab), and Anshul Singhal (Katti Batti). That results in a tonal imbalance on Hasmukh, as its quest for being darkly comedic pushes into absurdity and goofiness at times, seemingly brought on by two competing visions of the show: Das and Ranadive have a stand-up background, the others don't. Das said as much in an interview, noting Hasmukh was even more “ridiculous” before Advani & Co. stepped in.

In that regard, the Netflix series could do well to learn from its close HBO cousin in Barry, whose co-creator and star Bill Hader also comes from a comedic background (Saturday Night Live), but does a much better job handling the wacky end of the spectrum. Hasmukh is unfortunately all over the place, as it dissolves into a B-grade cable sitcom now and then. In a few places, incompatible background music upsets the rhythm of the show. It features uninspired direction and camerawork, including the endless cutaways to show audience reactions (or the insertion of laugh sounds) that feel a bit needy, almost akin to an inbuilt laugh track. And on top of that, Hasmukh largely delivers stale, half-baked jokes, which further lessens the show's impact.

From Money Heist to Modern Family, TV Shows to Watch in April

Hasmukh opens in Saharanpur, a city four hours north of New Delhi in the state of Uttar Pradesh. An aspiring comedian, Hasmukh (Das) daydreams about performing on a leading TV comedy competition. But he's stuck in a rut, serving as an assistant to heartless mentor Gulati (Manoj Pahwa, from Article 15) and working in his abusive uncle's metal scrap factory. One night, Hasmukh reminds Gulati of a promise made to him, that he would soon get to perform for an audience. Gulati asks Hasmukh to rehearse a joke, but after he struggles with delivery, Gulati rebuffs him. Except Hasmukh isn't willing to take no for an answer, and in an ensuing struggle, he ends up accidentally killing the old timer. A terrified Hasmukh takes to the stage in place of Gulati and delivers the same joke in style.

Among those impressed is Gulati's frustrated manager Jimmy Moses (Ranvir Shorey, from Titli), who decides to destroy evidence — the murder weapon — upon discovering the body. Jimmy then blackmails Hasmukh into becoming the latter's manager, before taking him on a mini-tour of Uttar Pradesh's local comedy circuit. But Hasmukh keeps bombing. After Jimmy wonders what's up, Hasmukh says that he's missing the “feel”. Jimmy puts two and two together, and realises that Hasmukh must kill off-stage to kill on-stage. Soon, they are on their way to Mumbai, after the head of the aforementioned comedy competition spots Hasmukh on YouTube. That acts as the gateway for Hasmukh to bring in its motley of film industry personalities, which is also where its problems begin.

For one, the supporting characters are all one-note, clichés, and caricatures. Everyone talks like they know they are in a TV show. At times, they behave stupidly for the sake of the plot. While some are organically woven into the narrative, even as they serve no larger purpose, some others are forced into romantic entanglements that never come across as genuine. Hasmukh also wastes a lot of time on other characters that seemingly exist only to hint at characteristics or atmosphere, with little overall thematic impact. The Netflix series wastes even more screen time rehashing previously-discussed plot points, just to set up a future conflict, or showcasing unnecessary flashbacks that remind audiences of events they saw an episode earlier.

Money Heist, Extraction, The Departed, and More on Netflix in April

There's just too many threads and subplots on Hasmukh, and most of them aren't interesting on their own, which brings down the quality of the final product. On top of all that, the scenes set in offices are plain boring in contrast to those that centre on the lead character's moral complications. Hasmukh is meek and mostly subservient to others, but the years of trauma he's endured can set off a switch in his brain, making him vengeful and driven. That said, the deaths still take a toll on him. (Hasmukh also makes the Mumbai Police look inept, almost as if they've never heard of forensic science. This is funny because Das cited Dexter as an inspiration, and if there's anything Hasmukh ought to have learnt is how methodic its titular character was to avoid getting caught.)

There's something inherently intriguing about Hasmukh's dual opposing personalities, but Hasmukh never devotes it the time and space to properly explore that. It's preoccupied with the dark underbelly of Bollywood, and when that becomes the focus — which feels like a bunch of insiders, who feel like outsiders, taking pot-shots at the powers that-be — all that is good about the show is lost. In turn, not only does it detract from Hasmukh's primary goal, but it asphyxiates the interesting nugget at its centre. Maybe a second season — the finale leaves us at a cliff-hanger of sorts — will rediscover what it set out to do. But as the first gets more improbable and goofy by the minute, Hasmukh ends up way off the black comedy thriller tone that it aims for, threatening to turn into a parody of itself.

Hasmukh is now streaming on Netflix in India and across the world.