In Netflix's Happy!, an Alcoholic Ex-Cop Must Rescue His Kidnapped Daughter From Santa Claus. And Then It Gets Weird. 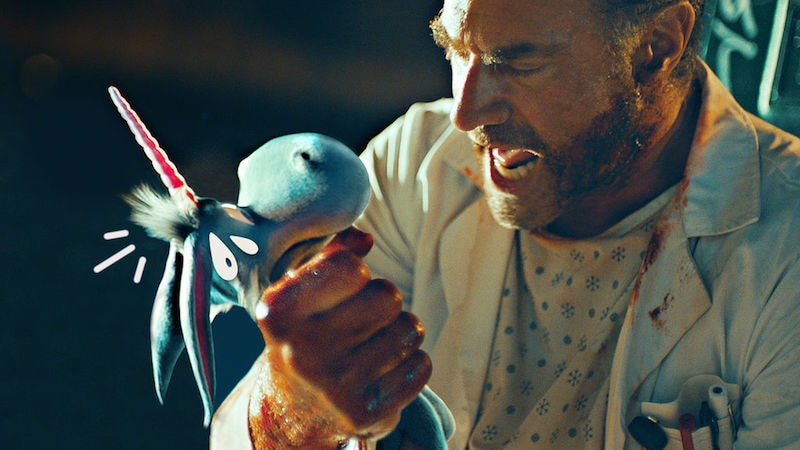 With a huge line-up of originals it's getting easy for projects to get lost on Netflix, particularly when they're not being produced by the streaming company. That was the case when SyFy produced Netflix original Happy! released for streaming a week ago with little fanfare, but then one detail caught our eye - the listing of Grant Morrison as creator. Yes, the Grant Morrison, of Arkham Asylum: A Serious House on Serious Earth fame, Justice League of America, not to mention his run on X-Men, and so much more.

Morrison is known for his meta-fiction and the frequent breaks from reality that his works take, dipping heavily into surrealism even for superhero comic books. With that in mind, the premise of Happy! starts to make a lot more sense. The show - an adaptation of a miniseries by Morrison, it spans eight episodes of 43 minutes each - is about a former policeman who works as a hitman, who comes across a flying cartoon unicorn that only he can see, and the unicorn tries to get him to rescue a little girl who has been kidnapped by Santa Claus.

The first episode starts with our protagonist Nick Sax (Christopher Meloni - Law and Order) taking a contract to kill someone while completely inebriated, and follows through with a quick shooting spree. It doesn't end well though, as he has a heart attack near the end of the shootout, and ends up in the hospital. Along the way, word spreads that he's learned a password from one of the men he shot, and now the mob wants him dead.

From the start, there's over the top gratuitous violence, and the show can honestly be hard to watch. There's all kinds of violence, and few - if any - of the characters are not downright horrible. That includes Sax, and his former partner Detective Meredith McCarthy (Lili Mirojnick), and many of the friends and contacts that Sax turns to, not just the "bad guys".

As the show progresses, Sax is fleeing from the hitmen out to get him, while also trying to track down the rogue Santa Claus, and there are flashbacks that tell you about his fall from grace, and how he ended up leaving the police. Through all this, Sax is accompanied by Happy, the imaginary friend of the little girl who has been kidnapped, and we learn very quickly that she's none other than Sax's own daughter. Voiced by Patton Oswalt (Ratatouille), Happy is meant to balance this out, with a steady stream of jokes, funny bits like helping Sax cheat in a poker game before accidentally snorting cocaine and bouncing off the roof, and making puppy dog eyes at Sax to keep him focused on the task at hand - saving his daughter from Santa.

But although both Oswalt and Meloni are generally great in their roles, their interaction feels stilted. It's difficult to act with a CGI creature, and Sax ends up mugging to the camera in a way that's mildly reminiscent of Eddie Valiant (Bob Hoskins) from Who Framed Roger Rabbit. Only with a lot of extra swearing and blood.

It doesn't help that Happy himself looks weird and creepy and not at all cute. And while the animation looks good in parts, there are some scenes where it just looks jarring. For instance, in the third episode, there's a car crash with the donkey-unicorn in the car, and it bounces around while the car is tumbling in a manner that was so fake it completely took us out of the scene.

Like the animation, the show also struggles to find its own footing, jumping around in tone and style, which can make it a little hard to watch. It's the story of a man battling his own demons while he fights literal battles aided by an imaginary friend, and this whole schtick comes together and works at times, but at other times it just leaves you uncomfortable.

It pushes the boundaries of what you've come to expect from a TV show, and there's a running gag in particular that's simultaneously gross and hilarious, but the complete lack of subtlety means that there's no sense of catharsis in the story. You're numbed right from the start, and after that, there's nowhere left for the show to go emotionally.

Despite that, there's something oddly riveting about Happy!, and it isn't the geysers of blood and stomach churning gore. All the characters are completely committed to their parts, none more so than Oswalt and Meloni, and the latter's Sax in particular genuinely makes you question whether he should be committed to an insane asylum.

Having watched all eight episodes now, we can tell you that the ending will take you a little by surprise and brings back some elements from the very first episode. Happy the imaginary friend also seems more like a gag for much of the show, but as it progresses, his role, and that of imaginary friends in general, gets more fleshed out and serves a very important part in the end.

In some ways, Happy! also serves as an antidote to the superhero films that are everywhere these days. Because although he's not billed as one, the practically unkillable juggernaut that Nick Sax proves to be over the course of the show might as well be one. The show takes a character like that, and then puts him through an emotional grinder, and the result is a very broken human being who turns to drugs and alcohol and a barely concealed death wish. In today's entertainment landscape, that's a welcome change.