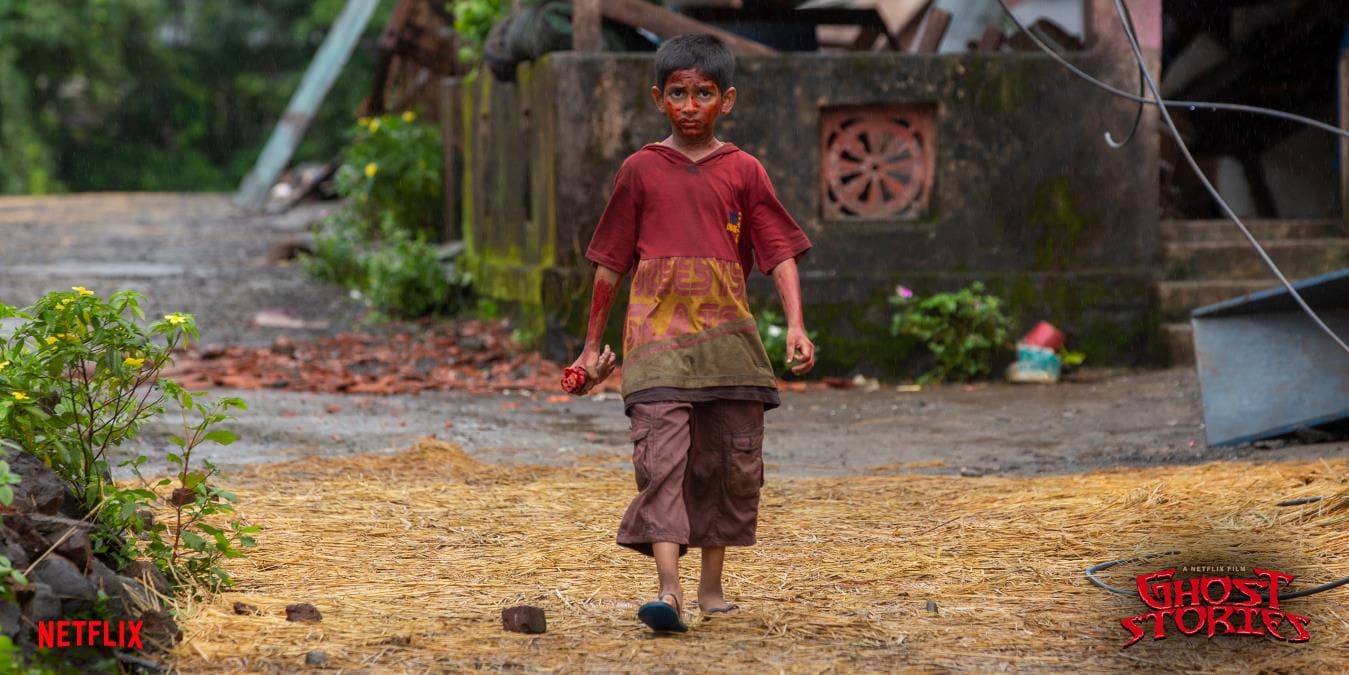 In the last decade, Netflix went from being a nobody to one of the biggest players in Hollywood. That strength is visible from the money it's now spending on movies — over $500 million (about Rs. 3,570 crores) put together on Martin Scorsese, Michael Bay, and Dwayne Johnson's ventures — and how it's rivalling other studios at awards. It has the most nominations at the 2020 Golden Globes, to take place this Sunday. But here in India, Netflix simply isn't at a stage where it can get big-time Bollywood directors to make feature-length films for its platform. What it can offer them though is an outflow of their creative juices, since there are no box office concerns to begin with.

That's what we get with the anthology film Ghost Stories, which reunites Zoya Akhtar, Dibakar Banerjee, Karan Johar, and Anurag Kashyap — after 2013's Bombay Talkies, and 2018's Lust Stories — as they try their hand at the horror genre. None of the four directors have done so previously, though Kashyap has come closest with his work. The results are wholly uneven, albeit expected in parts. Johar, who admitted to being at sea with horror, produces the weakest entry of the lot. Akhtar's tale, though competently shot by Tanay Satam (24: India), is forgettable. Kashyap is willing to go weird, but also seems to restrain himself. Ultimately, it's Banerjee who shines among the lot.

He's helped by the fact that his short film sits alongside material that simply isn't at the same level, but the varying quality isn't the only problem for Ghost Stories. In fact, the title itself feels wrongly hung on the whole thing. It's a simplification and a facade. Only one of the four stories actually involves a ghost. It's almost as if the producers were too interested in linking it to the previous one — Lust Stories also premiered on Netflix — and didn't know how to pull audiences in unless they went with something catchy. A subset of horror fans will feel lied to for being served this, while another kind of audience might not even hit play just by looking at the title.

It's Akhtar who opens Ghost Stories, in which in-home nurse Sameera (Janhvi Kapoor) is filling in for a colleague to take care of a bedridden, elderly woman (Surekha Sikri) who lives by herself in a dingy apartment. Except the old lady thinks her son still lives with her, even though there's no sight of him. Sameera initially ignores it, but when she hears strange sounds at night, she's naturally spooked. The production design crafts the right atmosphere, and Satam holds the shot to build tension and immerse you in the film. Written by newcomer Ensia Mirza and Akhtar, it wants to tackle the fear of abandonment but it's too talky with its ideas, and there's little depth to it in the end.

That lack of depth is most visible in Johar's section of Ghost Stories — penned by ad copywriter Avinash Sampath — which follows an extremely privileged Ira (Mrunal Thakur) falling for her ilk Dhruv (Avinash Tiwary) in an arranged marriage. Dhruv loves her too, but he's also deeply attached to his grandmother, whom he talks to even though she died two decades ago. Rich families and big houses lend themselves to dark secrets and eeriness, but Johar's approach is too amateurish and tropey. The script makes you think for a second that it might upend expectations, only to run out of ideas. It's merely content to operate on the surface, be it (thin) characters, (repeated) dialogues, or (ineffective) execution.

It shares one of those aspects — repetition of info the audience already has — with Kashyap's Ghost Stories tale, who seemingly doesn't trust his audience to keep up, disappointing for a filmmaker usually associated with pushing boundaries. Set in what feels like ‘90s Britain with a heavily desaturated look that borders on monochrome, it centres on a paranoid, pregnant woman (Sobhita Dhulipala) who babysits her late sister's kid Ansh (Zachary Braz). Written by Sacred Games assistant director Isha Luthra, it rachets up the drama with a series of nightmares and flashbacks, but its hard-left turn towards goriness as the character snaps still feels unearned. It's missing a piece or two.

Thankfully, that's not the case with Banerjee's Ghost Stories film — he also wrote it — which blends class commentary and mainstream horror elements in a winning package. He's also the only one who tries and succeeds with humour. Cinematographer Ranjan Palit (Pataakha) evokes Westerns and borrows from Hitchcock. It follows a man (Sukant Goel) who arrives in a village to find it empty, save for a young boy (Aditya Shetty) and girl (Eva Ameet Pardeshi). He's told that everyone has been eaten. The film is full of brilliant metaphors for today's socioeconomic ills, more so in a growing-divided India, with Banerjee never letting go of what he wants to say. Its lone problem, at times, is inelegant exposition.

As you can tell, Banerjee is the only one among the four who attempts to be political. His societal horror story bakes in the ugliness of caste, corruption, and immorality, and directly touches upon the erosion of small towns owing to the spread of urbanisation. (His Ghost Stories segment is one of two that involve a monster.) The other three are happy to work with personal horror stories that touch upon internal fears. Though that's equally valid as an exercise, all of them come up short in one way or another. Kashyap's ideas are buried too deep in the film, and though Akhtar's leaves itself open to interpretation, it doesn't reward you for the thought. Meanwhile, Johar's has nothing to offer.

But the strangest thing isn't the content, it's the packaging. There's simply no reason for the four tales to exist as an anthology movie. Unlike the previous two, Ghost Stories wasn't designed for the big screen, where audiences would have to see them in one go. Instead, it's been made specifically for Netflix. Why not split it into a four-part miniseries, when they exist standalone and can be viewed as such? (Sure, there's an accidental motif in crows, but they are superficial in most entries.) There's no convincing argument for that not to be the case. Though it would matter little when the insides aren't all that special.