Gemini Man Review: Two Will Smiths at the Cost of Everything Else

A script as hollow as the digital clone. 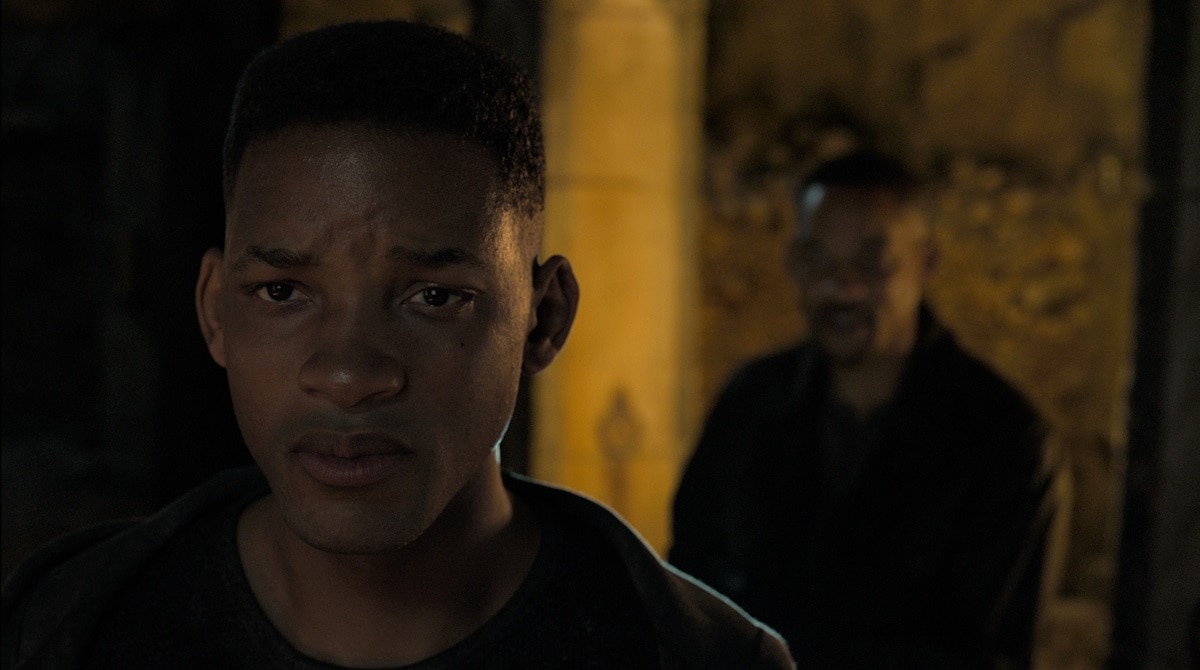 Gemini Man is a film that has been more than twenty years in the making. The big reason for that has to do with the approach to the premise — which involves a younger clone of an aging assassin sent to kill him — as the makers wanted to create a computer-generated clone of the protagonist, rather than cast another actor to do the work. For the longest while, the technology didn't exist to execute that convincingly. But it does now. Owing to the two decade-long delay though, the concept, premise, and underlying themes of Gemini Man have been explored several times. In 2002, Star Trek: Nemesis riffed on the concept (poorly), opting to use Tom Hardy to play the villainous clone of Patrick Stewart. In 2009, Duncan Jones explored the philosophical aspects of cloning with his debut film, Moon. And in 2012, Rian Johnson used time travel and different actors — Joseph Gordon-Levitt and Bruce Willis — for a similar premise.

That doesn't mean Gemini Man shouldn't exist. But it does mean it needs to offer something audiences haven't seen before. Unfortunately, its credited team of creators — the acclaimed director Ang Lee, working off a script by Game of Thrones co-creator David Benioff, The Hunger Games co-writer Billy Ray, and Goosebumps writer Darren Lemke — don't seem to have the faintest idea how to do that. In fact, Gemini Man even fails at being just an action or thriller film, as advertised. The film is largely inert and any momentum that it does build for itself is then squandered in the next lacklustre scene. Its characters have zero depth to them, and hence there's no emotional engagement to any of it. And entire scenes seem to be missing in between, so it's likely that much of the character development was abandoned to shrink Gemini Man into a runtime of less than 2 hours. Essentially, the film rings hollow.

For what it's worth, Gemini Man does actually have something to offer (most) audiences haven't seen before. Continuing his love for bleeding-edge tech from his previous feature, Lee has shot Gemini Man in extra-high frame rate — 120fps to be precise, which is five times the standard 24fps — at 4K resolution in 3D. (Peter Jackson made The Hobbit trilogy in 48fps, while James Cameron intends to film Avatar sequels in 48 or 60fps. FPS stands for frames per second.) In theory, that means much, much smoother images with an imperceptible flicker. But Lee has spent time and money on technology that forget being appreciated, can't even be seen as intended by most audiences. Not a single screen in India, or the US for that matter, will screen Gemini Man in 120fps at 4K in 3D. In India in fact, Gemini Man is only available in the plain ol' 24fps at 2K in 2D. (It's in IMAX too, if that's any consolation.)

Gemini Man opens in Liège, Belgium, where government assassin Henry Brogan (Will Smith) gets to show off his skill level by sniping a bio-terrorist target travelling in a bullet train at 240km/h. With his 70-plus kills weighing on him, Henry decides to retire from service. But since the film revolves around him, he's naturally pulled back in. The plot is so generic and convoluted that it needs no explaining except to say that Henry's life is in danger, which forces him to ditch his Georgia home in the US with Defense Intelligence Agency operative Danny Zakarweski (Mary Elizabeth Winstead), who was sent to surveil Henry but becomes a loose end after being burned. They are being pursued by their own government, including Clay Varris (Clive Owen), the nefarious head of a secret black ops project known as GEMINI. (The film never offers a full form.)

Seeking help, Henry and Danny meet up with Henry's former colleague and friend Baron (Benedict Wong), which kick starts Gemini Man's globe-trotting plot from Cartagena, Colombia to Budapest, Hungary. (Most of it is comprised of action sequences that have a longer than usual average shot length, but isn't anything memorable and borders on parody at times. In one scene, Winstead is essentially turned into a light source.) Following them close behind — it's in the premise, the trailers have spoiled it already, and the film doesn't drag it out for too long either — is a younger clone of Henry called Junior (Smith, via a combination of CGI and motion capture), sent by Clay. Henry is spooked and hesitates to take a shot at him but Junior, who doesn't know any better, seems to have no qualms about killing him.

Gemini Man never bothers to really dig into why Clay would send Junior after Henry, or why Henry would try to avoid killing Junior. It offers a cursory, ambiguous explanation for the first one — Clay refers to Henry as Junior's “darkness”, even though they are unrelated outside of their matching DNA — and it explicitly points out that Junior couldn't be Henry's son he didn't know about, since he's never had a long-term relationship with anyone. Gemini Man does wish to explore the regret Henry has in not being a husband or father, having used his job as an excuse. It also wants to ruminate on the philosophical idea of nature vs nurture. At the same time, it betrays a deep lack of interest in how it gives itself no time to tackle these concepts in any meaningful way. The film jumps one from thing to another without any meaningful connective tissue to hold all of it together.

As a result of this, it's Junior who suffers the most in Gemini Man, as his actions feel like they've no real weight to them. Audiences need to feel the internal conflict he's wrestling with, between the seeming lies he's been fed throughout his upbringing by what seems like a doting albeit conniving father versus the shocking truths that are being poured over him by his older clone whom he's been tasked with killing. Could Henry be simply lying to save his skin? What's the ulterior motive of his adoptive father Clay? All of this is necessary to Gemini Man, but it just isn't played out for long enough on-screen. Instead, Junior seems to switch from one emotion to the other on a whim, and those heel turns are just indicative of the aforementioned hollow writing.

Speaking of poor writing, Gemini Man is also filled with boring and stilted dialogue that further pulls down the film. Its attempts at banter crash land and the exposition is dreary. Henry's obsession with his age and others' mockery of it — he says he's 50, everyone corrects him that he's 51 — is never properly set up. Clay is stuck with cookie-cutter dialogues and a third-act monologue about how cloning is more humane in times of war, while Baron really wants you to know that he served in tiny countries around the world which he's only too happy to name-check. Elsewhere, characters are killed off and their friends have little to zero emotional response. And lastly, there are scenes written in to fool the audience that completely fall apart if you think back to them.

The only thing that does work in Gemini Man is its technological achievement of a digitally-created younger Smith — except for the very end. Most scenes involving Junior take place at night, which means the imperfections aren't that easy to spot. But the whole thing descends into the uncanny valley as soon as daylight falls on Junior's face. Still, two Will Smiths can't help a film that's lacking in most departments. All of Winstead, Owen, and Wong are underused, a criminal act in addition to its missteps with character development and dialogue writing, hand in hand with haphazard editing and pacing troubles. Gemini Man spent over two decades in development hell waiting on the tech to catch up, but Lee & Co. seem to have forgotten that films are built on the foundation of words, not pixels.

Gemini Man is out Friday, October 11 in cinemas in India in English, Hindi, Tamil, and Telugu.