Fantastic Beasts and Where to Find Them Review: Care of Magical Creatures, and a Brewing Dark Side 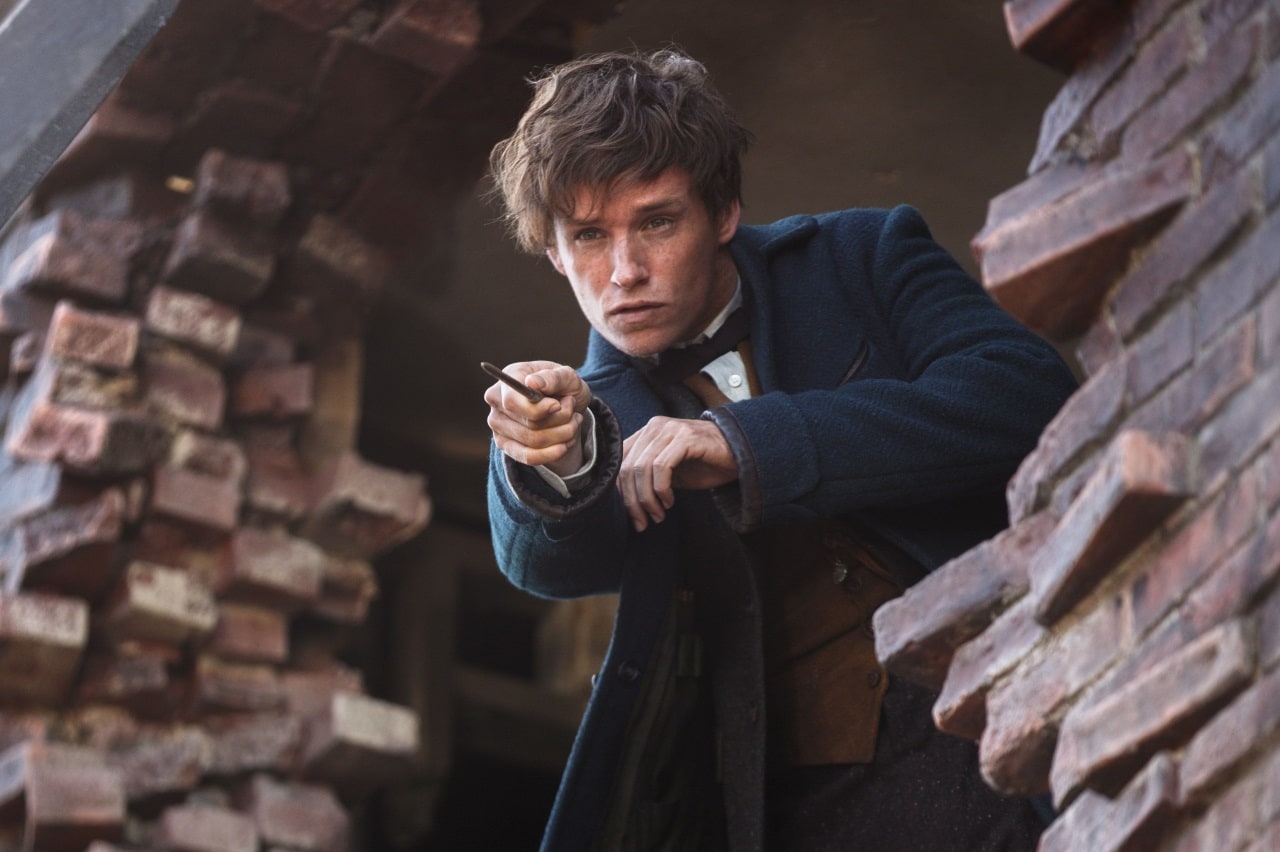 When Harry, Ron, and Hermione dropped off their kids at Platform 9 ¾ on King's Cross at the end of Harry Potter and the Deathly Hallows – Part 2, we thought we had put the franchise to bed. And as the end credits rolled onto the screen, the iconic and graceful notes of Hedwig's Theme – or as we all know it, “that Harry Potter tune” – left tears in the eyes of most Potter fans.

So, when the same notes start playing mere moments into Fantastic Beasts and Where to Find Them – a spin-off film whose title is derived from a book Potter once read at Hogwarts – it just doesn't feel right. As the audience, we have developed no connection whatsoever with the characters that we are about to see, yet the film is trying evoke memories of a deep past that earned its affection over the course of a decade. But this is Hollywood, a world where franchise is the new buzzword, and nothing is sacred.

And that is exactly what Fantastic Beasts sets out to be, right from its dark and grim beginning. Gellert Grindelwald, who is played by Johnny Depp in a small cameo role, is making a name for himself as the greatest Dark wizard of his time. It's only then that the film brings in Newt Scamander – played by Oscar-winner Eddie Redmayne – the future author of the aforementioned book, on a visit to 1926 New York as part of his ongoing research of the fantastical animals. The order of their introductions is very much deliberate, considering Grindelwald will be to the five-film Fantastic Beasts franchise, what Voldemort was to Harry Potter.

The first film is Scamander's story for the most part, and where the Potterverse relied on a trio – Harry, Ron and Hermione – Fantastic Beasts makes use of a quirky quartet in Scamander, Jacob Kowalski (Dan Fogler), and the two Goldstein sisters – Tina (Katherine Waterston) and Queenie (Alison Sudol).

(L-R): Katherine Waterston as Tina Goldstein, Eddie Redmayne as Newt Scamander, Alison Sudol as Queenie Goldstein, and Dan Fogler as Jacob Kowalski in a promotional still for Fantastic Beasts and Where to Find Them

(Also see: Harry Potter and the Cursed Child Is Devoid of the Rowling Magic)

Scamander is a sheepish, eccentric and shy magizoologist, and he actually seems more at home with his pet beasts than around humans, which is unfortunate for the film, as he has to interact with the latter so often. Tina is the most normal of the four – a hard-working former Auror who's now stuck in the basement of the MACUSA (Magical Congress of the United States of America), the American counterpart of the Ministry of Magic, after an incident. Her past is better explored than Scamander's, who can feel quite wooden at times.

Queenie is not only exceedingly charming and big-hearted, capturing the sensual nature of Jazz Age, but is also an expert Legilimens. It helps that Sudol plays her perfectly, and it's a delight to have her around in the moments she does spend on screen. And then there's Jacob Kowalski, a canning factory worker who wishes to have his own bakery, and more importantly is the only No-Maj (American for “muggles”, people with no magical ability) in the group. Naturally, he's the audience surrogate, marvelling at the wonders of the magical world he gets exposed to.

It all starts with Scamander who arrives in New York with a suitcase full of magical creatures, which has a recurrent problem with its clasps. You see, they tend to randomly open and allow the creatures to enter our world. He has barely made his way into the city when a Niffler – a long-snouted small beast with a penchant for anything that glitters – escapes in a bank. A bank that Kowalski has come to, in order to ask for a loan on the bakery.

Amid the ensuing chaos, Scamander and Kowalski end up accidentally switching suitcases. And so, when the latter gets back home and opens his bag, ignorant of the contents within, letting loose many of the creatures. Meanwhile, Scamander gets arrested by Tina for using magic in front of a No-Maj, which is a big no-no in 1926 New York with the Second Salemers (hint: think of the Salem witch trials) putting a target on the back of all practising wizards and witches. But Tina's shaky relationship at MACUSA means her complaints are ignored, and when they find out his suitcase is just full of bakery goods, she instead ends up helping Scamander to recover the lost goods.

From there, the film turns into a period version of Pokémon Go, as Scamander, Tina, and Kowalski scurry to retrieve the beasts that are freely roaming about the city of New York. Buoyed by director David Yates' visual imagination, the audience is treated to some delightful scenes involving a rhinoceros-like Erumpent in the Central Park Zoo, an invisible ape-like Demiguise named Dougal, and a serpentine-bodied Occamy who can expand and shrink to fit available space. By playing with all this, Fantastic Beasts is very much an upgrade from Harry Potter, as it gets to play with a world both much larger, and riskier, than Hogwarts, what with the omnipresent nature of No-Maj Americans everywhere.

Along the way, we are introduced to several elements that will be important to the franchise, as well as necessary call-backs to the Potter world we know of. While in the suitcase, Kowalski comes across a dark force called the Obscurus, which Scamander forbids him from touching. It's a physical manifestation of repressed magic in children, and is often uncontrollable. Meanwhile, a powerful Obscurial is wreaking havoc on New York, which is where we meet the fanatical leader of Second Salemers, Mary Lou Barebone, who beats her adopted children, Credence (Ezra Miller) and Modesty (Faith Wood-Blagrove).

Then there's the powerful Auror and MACUSA's Director of Magical Security Percival Graves (Colin Farrell), who when not doing his job, holds secret meetings with Credence to help him find the child with the Obscurus. Graves promises Credence that the magical community will honour him, but secretly harbours his own agenda. Albus Dumbledore is name-dropped during the film as well, and his frenemy relationship with Grindelwald is set to be a big focus for one of the four remaining films in the franchise.

Fantastic Beasts is helped by the fact that it's an original script, and hence does not have to deal with pre-existing written word. That's unlike every Harry Potter book adaptation before this, whose criticisms tended to be drawn from its deviations from canon, and its loose treatment of magical concepts in other places. The fact that every viewer will see the film without the baggage of canon in their mind is a boon for Fantastic Beasts. And while there's lacklustre chemistry between Scamander and Tina, they receive a great amount of help from the other pair, as Kowalski and Queenie are easily one of the film's highlights.

One of JK Rowling's fantastic abilities is her adeptness at keeping the mystery alive, and thereby keeping audiences waiting on the next moment. The first half of the film does this much better than the second, in that the former only has to set-up this fascinating magical world, with the latter having to tie down (most of) the threads and offer up a convincing and satisfying conclusion. It's not a problem just for Fantastic Beasts, per se, but a conundrum for any film looking to kick-start a franchise.

The bigger issue for Fantastic Beasts ends up being its tone. If you thought the Harry Potter world had gotten progressively darker towards the end, this film – even with Kowalski and Queenie's inclusion – ends up crossing that line handily. And with the story eventually building towards the Global Wizarding War, which ran parallel to World War II, it can only get bleaker from here on.

Warner Bros has announced and signed up both writer JK Rowling and director David Yates – who helmed the last four Potter films – for all five films of the Fantastic Beasts franchise. The fact that an entire universe has been greenlit before audiences have even seen a single frame speaks of the cinematic-universe-driven world we live in.

We can only hope this uncalled-for addition to the larger Potterverse doesn't end up going the way of the other Warner Bros franchise. And who better to trust than Rowling herself to keep the magic alive.

Fantastic Beasts and Where to Find Them