Extraction Review: Chris Hemsworth’s Netflix Movie Is Heavy on Action, but Little Else

Technically impressive, but a waste of most Indian actors’ talents, in addition to the award-winning Golshifteh Farahani. 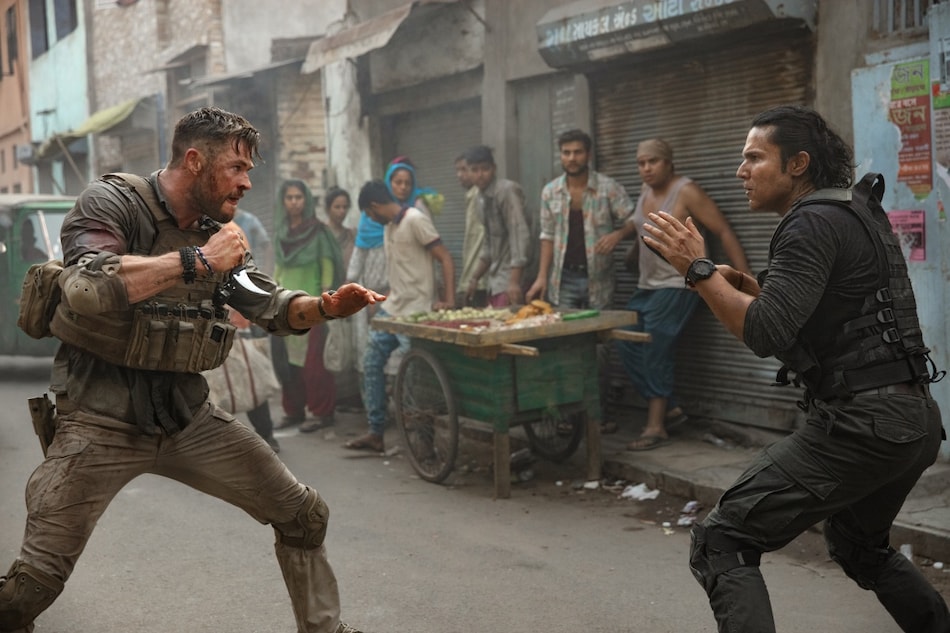 It's March 2012. Dwayne Johnson has just signed on to star in the action thriller Ciudad — based on the eponymous graphic novel from Joe & Anthony Russo, comic book writer Ande Parks, and illustrator Fernando Leon Gonzalez — about a weary mercenary hired by a Brazilian drug lord to rescue his daughter from one of the world's most dangerous and corrupt cities: Ciudad del Este, Paraguay. Eight years later though, Chris Hemsworth has taken over from Johnson in the lead. Ciudad is now called Extraction — which has also moved from theatres to Netflix in the interim — and it now involves an Indian drug lord who wants his son back from another dangerous and corrupt city: Dhaka, Bangladesh.

That transformation is paralleled in the life of the Extraction makers. In 2012, the Russo brothers didn't have a single Marvel movie under their belt. Now, they have directed four, including the two biggest of all-time in the mega team-ups Avengers: Endgame and Avengers: Infinity War. Back then, Hemsworth had done Thor but he was yet to appear in his breakthrough, The Avengers. Extraction — on which Hemsworth makes his debut as producer alongside the Russo brothers — is clearly a much easier sell now. Even debutante director Sam Hargrave is a Marvel alum, having worked as a stunt coordinator on multiple entries. And that should tell you what to expect from the new movie.

Extraction delivers plenty of action. Hemsworth gets into a knife fight with Randeep Hooda. He beats gun-toting Bangladeshi to a pulp with his bare hands. And oh, there is a 12-minute long take — well, sort of, more on that later — that finds Hemsworth driving crazily through the streets of Ahmedabad (which stood in for Dhaka), and playing hide-and-seek with the police through apartment complexes on foot, while trying to keep the kid alive. But what Extraction doesn't have is Bangladeshi actors in any capacity. In fact, most Indian stars, who play both Indians and Bangladeshi, are also just dressing for the movie. It severely underuses everyone except Hemsworth, and that's a shame.

The Netflix film opens with a half-dead Hemsworth in Dhaka, before jumping back two days to introduce Ovi Mahajan Jr. (newcomer Rudhraksh Jaiswal), the high schooler rich kid of imprisoned drug lord Ovi Mahajan Sr. (Pankaj Tripathi, from Mirzapur) — someone should've told writer Joe Russo that this naming convention isn't a thing in India — who is kidnapped by rival drug lord Amir Asif (Priyanshu Painyuli, from Bhavesh Joshi Superhero). Amir is described as Dhaka's own Pablo Escobar at one point, to paint an easy picture. But Extraction never bothers to answer why Ovi Jr. is kidnapped. It can't be ransom since Ovi Sr.'s assets have been seized. What is it? Who knows, because the two drug lords never have a single conversation in Extraction.

Anyway, it falls to the Mahajan family's right-hand man, army special forces vet Saju Rav (Hooda, from Highway) to rescue Ovi Jr., after he is threatened by his employer that he won't get to see his own son's next birthday. Saju hatches a plan that brings in grieving mercenary-for-hire Tyler Rake (Hemsworth) all the way from Australia — can someone give us the timeline of this two-day movie? — who has been drowning himself in liquor and painkillers when not on the clock. He quickly signs on, confirming that he has a death-wish, though he claims to need the money. In Dhaka, Tyler secures the kid in 10 minutes, which is enough to realise that is not going to be a straightforward mission.

That's where the action properly begins. With Amir virtually commanding all of Dhaka's police, Tyler and Ovi Jr. attempt to evade their clutches. The start of the resulting chase — through forests, roads, and indoors — is depicted with a series of long takes digitally stitched to look like one 12-minute sequence. Technically, it's very impressive, given the destruction and variety on display. It's also high on thrills, with the shaky cam contributing to that feel. And with the camera stuck close to Hemsworth, it's clear that the actor is performing most of his own stunts. But at times, it also feels like a video game for how characters interact with their surroundings, only seeing what's in the frame, or how other characters appear out of nowhere, as and when convenient.

Extraction bridges the many action scenes with quiet moments that not only let the film breathe, but also make room for much needed character development and relationships. It's hard to care for what's happening on screen if you don't feel for the people on screen. Nearly everything on the Netflix film is about fathers and sons, be it with Tyler, Saju, or the two Ovis. But it's nothing special. And women have little presence here. Golshifteh Farahani (About Elly) is the most high-profile of the lot, but her talents are wasted on Extraction, as is the case with Painyuli, who orders people around and looks through binoculars, or Tripathi, whose role amounts to a cameo. At least David Harbour's presence — the Stranger Things star plays an old friend of Tyler's — is worth it just to see him nod his head to Hindi rap. Speaking of, several Bollywood songs play in the background.

But again, that's just window dressing for Extraction, which further speaks to the surface-level depth of the Netflix movie. Mar that with one-note characters — for those that have characteristics to begin with, as the others might as well be replaced with props — who survive thanks to plot armour, and it makes you wonder how (or if) Extraction would have been any different if it was still in its original form as Ciudad? It's been through so much churn that the costumes for its nondescript band of Bangladeshi special forces look like the discards for a film set in America. There's no shortage of gunplay, grenades, and hand-to-hand combat on Extraction — but little else.

Extraction is out April 24 in English, Hindi, Tamil, and Telugu on Netflix.