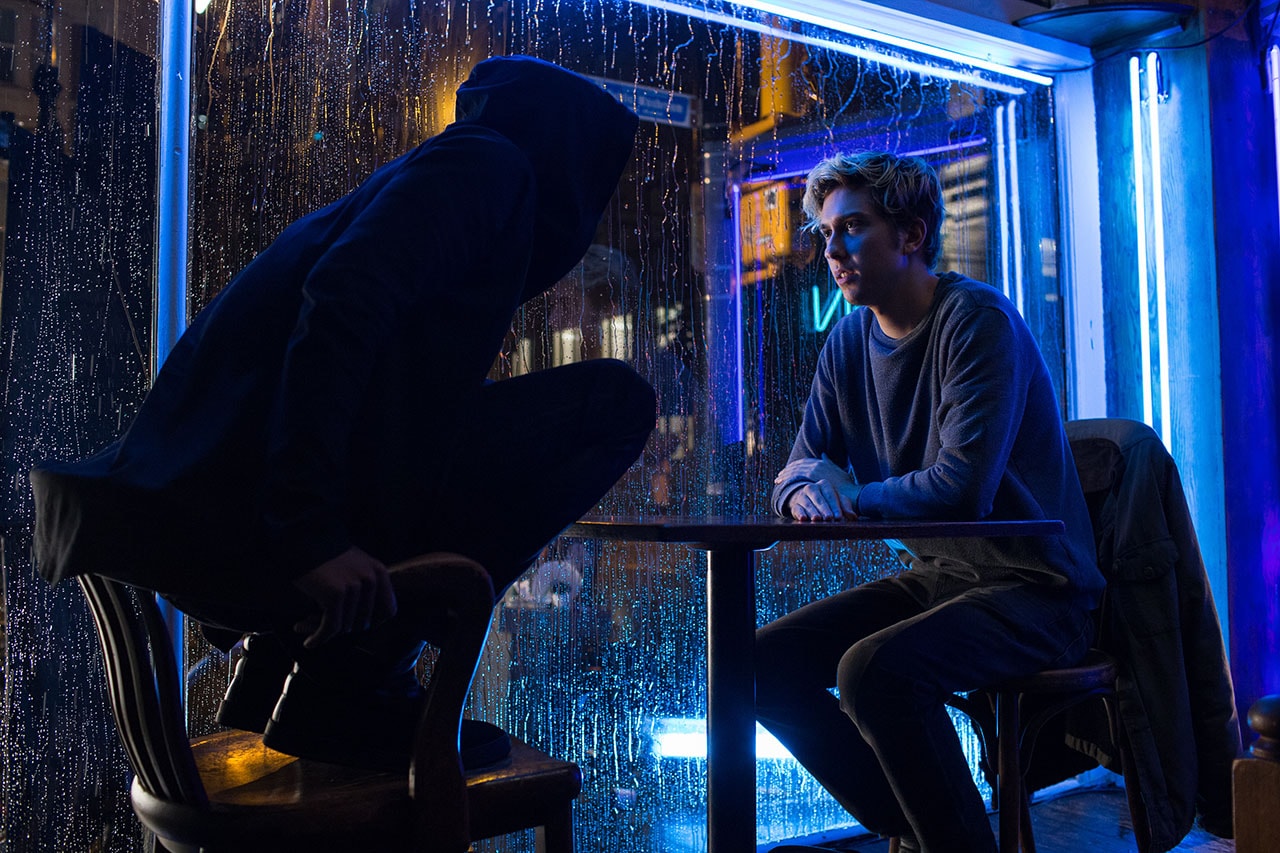 Lakeith Stanfield as L, and Nat Wolff as Light in a still from from Netflix's Death Note

The Death Note adaptation by Netflix has a lot of things wrong but the biggest one is its preposterous attempt at compressing a big chunk of the story told by Tsugumi Ohba and Takeshi Obata over 108 chapters in the manga (and 37 episodes in the critically-acclaimed anime) into a film running barely over 90 minutes. In packing a dozen hours worth of a tale about morality, religion, violence, and justice into a feature-length project, the Death Note Netflix movie – directed by Adam Wingard (The Guest), and co-written by Jeremy Slater, and brothers Charley & Vlas Parlapanides – fails to handle the nuance that has made Death Note so resonant and popular, and instead produces a gory violent film by way of weird teenage high-school romance.

Even as the Death Note setting and the characters have been transported to America, the gist is the same: a brainy teenager with no friends named Light Turner (Nat Wolff) is going about his school life when a notebook falls straight out of the sky and lands beside him. It reads 'Death Note' on the cover, and when Light ruffles through the pages, he comes across hundreds of rules inscribed on the pages that govern the book's purpose and use.

The most important one is the first one: if you write someone's name in the Death Note while picturing their face, then that individual will die. Light isn't sure what to make of it, but as his curiosity returns him to the pages after school one day, he's greeted by an 8-foot porcupine-like monster who appears out of the blue, and scares the life out of the high-pitched high-school student.

That's Ryuk – pronounced Ree-yook, as it tells Light later – who appears only to the keeper of the notebook, and remains invisible to everyone else. He guides Light through the notebook's capabilities, its limitations, and how to use it. In the manga and anime, Ryuk is a "shinigami" – a death god – whose backstory, motivations, and abilities are explored at length. But here, his role – voiced and motion-captured by Willem Dafoe – is reduced to providing the film's early exposition, and it stays out of the way for much of the running time.

After Light embraces the powers of the Death Note, his first action back in school the next day is to confide in Mia Sutton (Margaret Qualley), a self-described reclusive cheerleader that he has a major crush on. Mia thinks it's an elaborate prank at first, but after Light convinces her with a live display, she takes it in her stride and the two begin a whirlwind romance.

Together, they embark on killing spree using the Death Note, dispatching the world's biggest criminals, adopting a pseudonym on the way – Kira – which is colloquial in Japanese for the English word killer. A montage later, which finds the thrill of eliminating bad guys fuelling their relationship, Light and Mia are making global headlines as Kira, with terrorists blowing up themselves, death-row inmates slitting their wrists, and cartel members jumping in front of trains, all in the name of Kira.

The bloodshed attracts the attention of L (Lakeith Stanfield), a modern-day young Sherlock, who protects his identity by keeping two-thirds of his face covered. He runs mostly on the sugar-rush of candies, and helps himself to sleep by asking his assistant Watari (Paul Nakauchi) to sing him songs from The Wizard of Oz. After L figures out where Kira is based by using Japanese mobsters as bait, the Death Note film pits the two – Light and L – as they both try to deliver what each believes is justice.

Alongside, Death Note has multiple sub-plots: the strains put on Light and Mia's relationship by L's investigation, Mia's moral corrosion that takes her on a darker path, and Light's father James Turner (Shea Whigham), a police officer helping L to track down Kira, not knowing it's his own son.

But the Netflix's Death Note writers fail to properly address any one of those storylines, including the bigger conflict. Even more criminal is how badly serviced Light is as a protagonist, with the film making it way too easy for the viewer to root against him in his cat-and-mouse game with L, which is a shame given the moral complexities of the source material.

It doesn't help that Wolff is unable to portray the different sides of what the character demands, be it the megalomania, vulnerability, or the horror. Qualley is much better in imbuing her character with the manipulativeness and unpredictability the role asks for, but Death Note cuts her narrative arc short before it can come to fruition. Stanfield is the only human character that's compelling in any manner, but the character's oddities make him feel two-dimensional.

Dafoe is exceptional in the time he gets on screen as a CGI monster always living in the shadows, and he makes the most of what he has – his voice – with his maniac cackles, line delivery, and subversive humour. But by throwing out the shinigami aspect out the door, Netflix's Death Note film misses the point of what drove the manga in a powerful way, in that a death god left his realm for Earth just because he was bored.

It turned the Einstein quote – God doesn't play dice – on its head, since Ryuk is literally banking on chance by arbitrarily tossing a thing as powerful as the Death Note onto our planet, and seeing what comes of it.

Making matters worse is that Wingard, who has spent over a decade dabbling in horror films, takes a similar approach to Death Note. That results in Final Destination-style killings involving gruesome violence and blood spatters, which shows that the creators didn't spend any time understanding the magna's overarching themes, let alone update the story for today's age, and its Americanised depiction.

A lot of criticism has been levelled towards the live-action Death Note right since its casting days, for what many perceive to be whitewashing with setting it in Seattle and with an all-American cast, given its origin in Japan. To be honest, all that can be forgiven if an adaptation is willing to take time to recognise the material's true worth, and create a version that stands true to its values. In short, good writing.

But Netflix's Death Note never feels like it knows what it's trying to say, delivering an insipid horror-thriller alongside a half-baked toxic teenage romance that culminates in an action-heavy climactic sequence, which plays out in a ludicrous fashion. Simply put, if the concept behind Death Note sounds intriguing, stick to the anime or don't bother.

We discussed Netflix's Death Note (jump to 66:00) on our weekly gaming and pop culture podcast, Transition. You can subscribe to it via Apple Podcasts or RSS, or just listen to this episode by hitting the play button below.