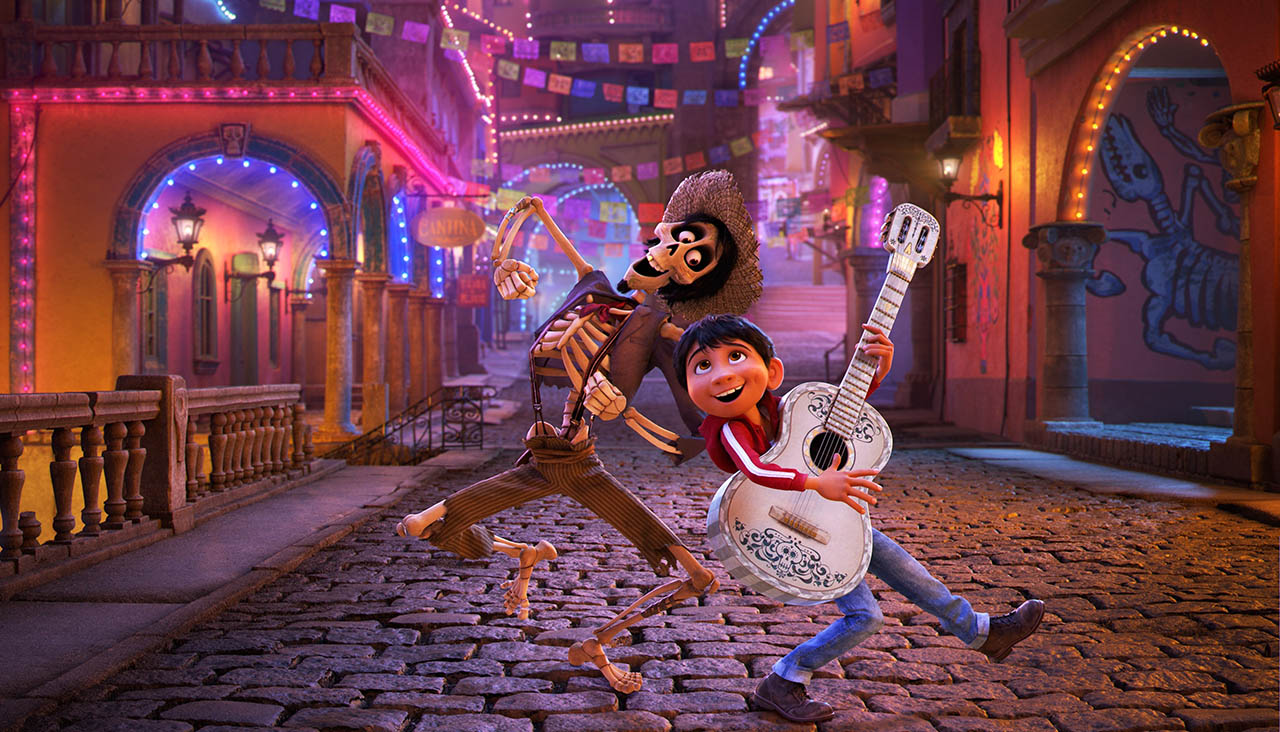 The protagonist of Pixar's latest family adventure Coco is a 12-year-old Mexican boy called Miguel Rivera (Anthony Gonzalez), who longs to be a musician. There's just one problem: his family hates music, and forbids anyone to go anywhere near it. It's not that they don't find it pleasing, but it has to do with a disturbing incident in the family's long-gone past. An animated papel picado sequence tells us that Miguel's great-great-grandfather left his wife and young daughter for his love of music, and so his wife ensured that no one would come near the artform again.

Now, just like the rest of his family, Miguel is being groomed to become a shoe-maker. Being the youngest in the household, he has no option but to do as they say. Behind his family's back though, Miguel aspires to perform at a local music competition on Día de los Muertos – the Day of the Dead, a popular Mexican festival – and has a garage attic full of mementos of a great singer who hails from his city, Ernesto de la Cruz (Benjamin Bratt), including posters and a videotape of his well-known moments from the various films he starred in, before his untimely death.

But as he tries to sneak his way out for the event that evening, he's caught by his family. His grandma Abuelita (Renée Victor) is enraged, and his attempts at trying to convince her only make her angrier, causing her to smash his beloved guitar into the ground. Miguel bursts out crying, and wonders the town square in hope of finding a guitar, to no avail. Out of options, he ends up at the monument to his hero Ernesto, and breaks in to steal the famous guitar hanging above his tomb.

A delighted Miguel strums the guitar and unknowingly ends up being transported to the land of the Dead. He's at once both shocked and confused, as he finds himself running right through living people, while crashing into strangers with skeleton faces whom he has never seen, like in a fever dream. Before he can start to make sense, he knocks into dead relatives, who seemingly recognise him from earlier visits to the graveyard on the Day of the Dead.

His dead family realise that Miguel has somehow “crossed over” – the land of the Dead is like an afterlife – and wonder how it happened. Together, they set out to fix the situation and return him to his home, but his love for music again lands him in trouble with his dead family too, from where the film turns into an adventure on two fronts: Miguel trying to find Ernesto, whom he believes is his long-lost great-great-grandfather, and family trying to locate him. The boy befriends a trickster called Héctor (Gael García Bernal) to help him, while his family enlists the help of a spirit animal alebrije Pepita, that looks like a jaguar mixed with an eagle.

The land of the Dead operates on some byzantine rules devised by the Pixar team, where the ones who have passed away being allowed to crossover to the land of the living on the day of the festival to see their loved ones, as long as their living family has put up a picture of them on an ofrenda, an altar used for the Day of the Dead. It even has a totalitarian security checkpoint which scans your face to see if your picture has been put up, and you're not allowed to cross otherwise.

Of course, if you think about the arrangements of this afterlife for more than two minutes, it can all disintegrate very quickly. Sure, you can't die unless you're forgotten by the living, but should people be beholden to their blood relatives even after they're dead? The point Coco is trying to make is that we should never forget our past, and remember who came before us. But being a family-friendly movie, it can't talk about toxic relationships, and that not everyone is worth remembering or remembered well.

Even for the topics it does tackle, Coco doesn't offer up the kind of surprising wisdom we've seen in Pixar's greatest hits. There's no sequence that rivals the emotional power from Toy Story 3 about growing up, or Ratatouille about the consequences of chasing your dreams. It gets its central point across with a lot of heart, and lays down that family should support you, and not use togetherness as an excuse to hold you down, but there's no added insight beyond that for the adults in the audience.

The screenplay too is predictable at times, with convenient happenings or last-minute saves that should have been better worked out. And as wonderful as it is to proclaim and fuel the idea that everyone should pursue their dream, Coco isn't smart enough to acknowledge that practicality played a big part in Miguel's upbringing, even as it hints at the risks that litter the creative path, thanks to an eleventh-hour twist that sends up the motto that drives our protagonist.

Visually though, it's a treat. The world of Coco is beautifully conceptualised and brought to life in a gorgeous, eye-popping fashion, with special mention for the aforementioned alebrije, which have their basis in Mexican folk art and have been rendered as multi-coloured fantastical creatures. And given that most of the film takes place during a single night, there's a much heavier contrast in Coco, unlike most other sunnier, bright Pixar films.

That doesn't have any reflection on the handling of the subject matter, which is still the traditional Disney-Pixar blend of cheery, tear-jerking, and fun. For the last one, that means tons of visual gags with skeletons, which manifests in body parts detaching and putting themselves back together in all sorts of ways. None of it is macabre or scary though. Coco also squeezes laughs from a bumbling street dog Miguel calls Dante, who follows him around everywhere and is the only living being that can see him after he crosses over.

Another important part of a Pixar film are its songs, and here, they contribute heavily to Coco's Mexican feel. Most of them are sung in English, as is the film itself (spoken not sung), with only a bare minimum sprinkling of phrases in Spanish that everyone already knows. It's a necessary shortcut on the part of the studio, as a fully-subtitled film would make it tougher for its younger target audience.

If you're wondering why the film is called Coco, that's the name of Miguel's great-grandmother. It's a bit workshopped because Disney was first interested in naming it after the festival itself. It applied for a copyright but backed down after severe backlash from the Mexican-American community about hijacking their culture. Seeing the response, it changed the title to Coco, and hired a vocal critic in cartoonist Lalo Alcaraz as a cultural adviser to avoid any blames of “cultural appropriation”.

Thankfully, the final product is a wholesome love letter to a beloved occasion, which tugs at your heart strings just like a Mariachi's guitarrón. Coco has already become the highest-grossing film of all time in Mexico since its release there last month, and it's poised to earn millions more worldwide, given its crowd-pleasing nature and the empty weeks to follow before the next big blockbuster.

How SimplyGuest Wants to Build A Different Kind of Hostel
Amazon Workers Strike at Italian, German Warehouses on Black Friday