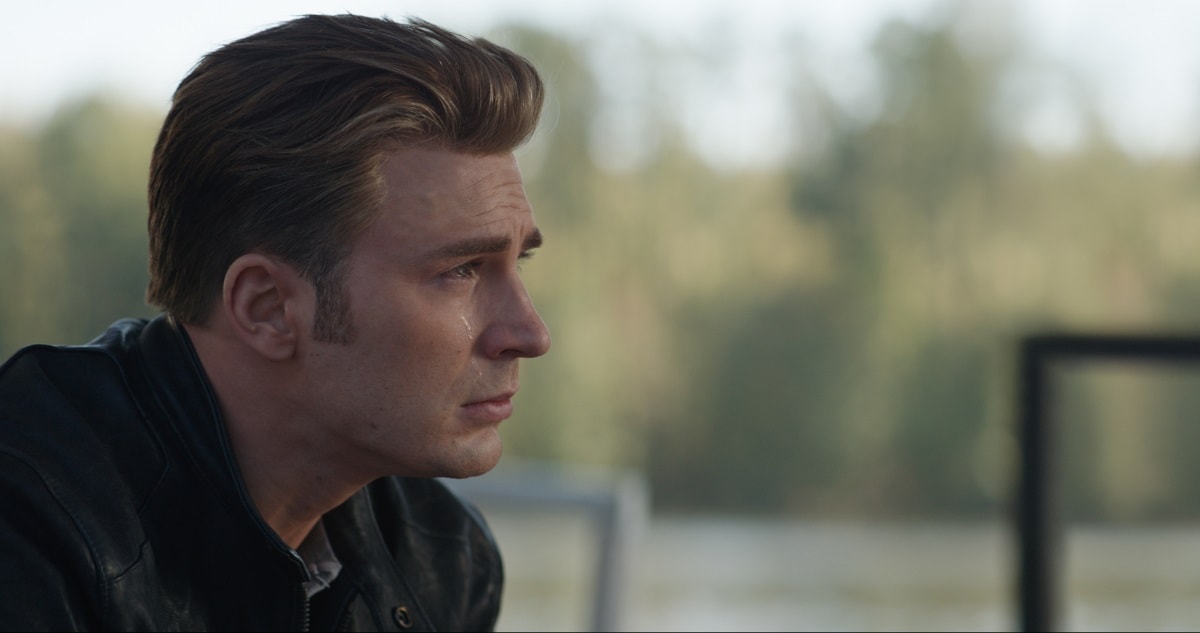 This time last year, Avengers: Infinity War shifted the Marvel Cinematic Universe by introducing something it had been mostly lacking in: stakes. Set aside the power of the Infinity Stones that Thanos (Josh Brolin) collectively used to wipe out half of all life in the universe at the end of the film, every punch and kick delivered by the purple giant — and his capable minions — carried a real sense of threat throughout. Vulnerable, always a step behind, and ultimately over-powered, the titular team of superheroes and their allies were dealt a heavy loss. As its direct follow-up, Avengers: Endgame picks up on the natural next step after a defeat — reflection and grief. Here's our Avengers: Endgame review.

For Marvel fans, it's clear that the in-movie universe must return to a semblance of normalcy, for the studios involved need this ever-expanding project to live long and prosper. (Pardon the cross-fandom reference.) But Avengers: Endgame has time on its side — yes, it's the longest Marvel film ever with a runtime of 181 minutes — before it must bother putting things back in order. As such, it can take its own sweet time in letting the remaining ones process their emotions as they deal with the fallout of Infinity War. Failure isn't something they are used to — they aren't just heroes, they are superheroes — and this particular one has a special bitter taste to it.

No spoilers ahead, although there are mild suggestions and veiled references that Marvel diehards might wish to avoid. If you prefer to go in completely blind, come back after you've seen the film.

The entire first act of Avengers: Endgame gives us a peek at what coping looks for the original band of Avengers, who were conveniently left untouched by the universe-altering snap of Thanos' fingers. (It's impossible to properly talk about Avengers: Endgame without giving anything away, so we'll stick to vague descriptions.) Blaming others, some have ventured towards a peaceful existence while some are taking it out on the world, some are living in denial while asking others to move on, some wallow in their failure and do their best to serve the best they can, and others have virtually given up and let life take its course. Except for the last stage — acceptance — in the five stages of grief, all are accounted for here.

These scenes allow the actors to reach into a different side of their characters, which in turn expands our understanding of them and deepens how we feel about and for them. But thanks to its runtime, Avengers: Endgame can do a lot more than just that. It has a three-act structure like most films, but it can also be viewed as three movies in one. The first one offering a meditative reflection on grief and loss, the second giving them hope to get back up and come up with a plan, and a final third that delivers bucket-loads of fan service in true comic book-style fashion. Avengers: Endgame needs the three-hour runtime to honour all that, and along the way, it earns that crazy length.

Avengers: Endgame is also several films in one because of how it's meant to serve as a farewell tour for the original gang of six who headlined The Avengers: Iron Man (Robert Downey Jr.), Thor (Chris Hemsworth), Captain America (Chris Evans), the Hulk (Mark Ruffalo), Black Widow (Scarlett Johansson), and Hawkeye (Jeremy Renner). Since it's the final chapter for most, Avengers: Endgame is naturally built around them, so it can tie up and put a bow on their standalone arcs. And it delivers on most accounts, with a couple of tragic deaths, a dose of wish fulfilment, and even a possible tease of an enticing future. That does mean other characters, War Machine (Don Cheadle), Ant-Man (Paul Rudd) and Rocket (Bradley Cooper), aren't as well-serviced, others like Nebula (Karen Gillan) merely serve the plot, while the likes of Captain Marvel (Brie Larson) barely feature.

For what it's worth, that reduced focus allows Avengers: Endgame to go deep with most. It's testament to the directors Anthony and Joe Russo, working off a script by Christopher Markus and Stephen McFeely — the team of four have previously given us Infinity War, in addition to the Captain America chapters The Winter Soldier and Civil War — that the film balances its many elements. Avengers: Endgame will alternately make you shed tears, giddy at the possibilities, excited for what's coming, whoop when you witness it, and nostalgic for the MCU past. It succeeds in mixing the dramatic and the comedic moments, which serve to complement each other, while delivering some whole-hearted entertainment.

Interestingly, for a blockbuster franchise centred on individuals with varying abilities, the action in Avengers: Endgame — at least for most of its runtime — comes in spurts. It stitches together the convoluted narrative that makes up the Avengers' newest mission, which is more about stealth than all-out warfare. But one constant in Avengers: Endgame's action is the sheer fan service, which partly relies on foreshadowing, unexpected happenings, and an assemblage of female characters who haven't been given their due share — only two, the Wasp (Evangeline Lily) and Captain Marvel, have ever been part of a film's title yet and only one, the latter, has a solo film — which only serves to highlight one of the problems with Marvel's first decade.

Even then, the film always earns its moments. And that's the biggest thing about Avengers: Endgame. Marvel has put the work in to earn what it brings to the table here. Every piece of it connects to the past in one way or another, which helps the film and enriches the original work too. The writers have infused their script with payoffs that traverse the history of the Marvel universe, on the back of unexpected reunions and poignant meetings that help craft several emotional moments. And it builds on what we've seen before, like Iron Man and Captain America's dynamic from Civil War, Thor and Hulk's relationship from Ragnarok, and Hawkeye and Black Widow's personal history that has seen the two help each other through their worst.

So much of it works because we've lived with these characters, having been first introduced to some of them a decade ago. And by having brought them together over the years, Marvel has strengthened the bonds between them, which now serves Avengers: Endgame. The Infinity Stones mostly came off as gimmicks whenever they showed up, in the likes of The Avengers, Thor: The Dark World, Guardians of the Galaxy, Avengers: Age of Ultron, and Doctor Strange. But thanks to those breadcrumbs, even the terrible parts become useful and are much more resonant in Avengers: Endgame, which also stands on the shoulders of a few giants as it goes about its narrative work. Now, everything is part of a whole that's greater than the sum of its parts.

That's also why Avengers: Endgame is simply not meant for newcomers. While Infinity War was more welcoming and could be enjoyed by those who had only seen half a dozen Marvel entries, Avengers: Endgame references and touches upon a lot further into the back catalogue. The film does its best to explain away those moments for those that haven't seen the prior adventures, but admittedly, they work a lot better as call-backs and winks to the audience. Avengers: Endgame is then clearly a love letter to the existing fanbase, which at times feels like a reminder of the wonderful moments the MCU has given us. That said, it's never gratuitous — the inclusion is justified in its importance to the overall narrative.

In celebrating the past, Avengers: Endgame does more than just help bid goodbye to the original gang, some of whom pass the torch to the next generation before they walk off into the sunset. (After all, Marvel has the future to think of.) It allows the audience to reflect on their own emotions as well, for how the superheroes speak to them about responsibility, teamwork, and love among other things. Avengers: Endgame is the culmination of what is ultimately a blockbuster TV show on the big screen. The MCU is unique in what it has achieved here, and it makes you wonder if Marvel itself, let alone someone else, can create something like this again. For the time being, it leaves diehards with many questions for what's to come and how the universe will proceed after such a seismic event.

Avengers: Endgame is out now in theatres worldwide. There are no scenes during the credits.