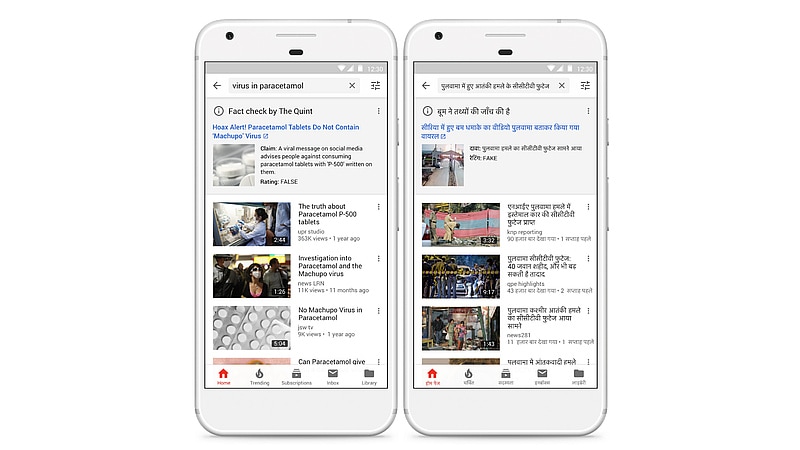 YouTube which had launched 'information panels' for news-related videos to flag misinformation on its platform, said these boxes will now highlight whether the publisher of the content is funded by the government.

"Our goal is to equip users with additional information to help them better understand the sources of news content that they choose to watch on YouTube. This information panel will be displayed on the watch page of all the videos on its channel," YouTube Director (Head of News Partnerships) Tim Katz said in a blog post.

He added that these additional information panels will be available in English and Hindi. Katz explained that if a channel is owned by a news publisher that is funded by a government, an information panel will surface that indicates that the publisher is "funded in whole or in part" or a "public broadcast service", with a link to the publisher's Wikipedia page.

In March, YouTube had announced that it will start showing 'information panels' -- flagging misinformation and offering correct insights -- for news-related videos on its platform as part of its efforts to curb spread of fake news. The Google-owned video platform already offers features like 'Breaking News' and 'Top News'.

"When users come to YouTube, we believe they should be able to make their own decisions about the information they consume. We want to provide context alongside content on our platform to help users make more informed judgments, which we've done by introducing a wide range of information panels on certain events, topics, and publishers alongside search results and videos," Katz said.

YouTube is engaging with a number of third-party publishers like BOOM, Quint, Factly, AFP, Jagran and others to verify the facts in news videos, and flag incorrect information to help users distinguish between misinformation and authentic news stories.

Katz stated that the company has been investing in new product features to "prominently surface authoritative sources across the platform". YouTube has also committed USD 25 million to the news industry, as a part of a broader USD 300 million investment by the Google News Initiative.

"In December, we announced funding to 87 news projects from 23 countries around the world to build stronger video capabilities and innovate with new video formats. And 10 of these projects came from India," Katz said. He added that the company is also investing in expanded support from YouTube specialists to support news partners grow their presence on YouTube - from providing training to helping with sophisticated technical integrations.

"We believe these positive steps will improve your experience of consuming news on YouTube and we look forward to continuing our close partnership with India's news industry, as we continue our efforts in this space," Katz emphasised.

Given apprehensions that social media could be misused to interfere in the upcoming elections, the government has been warning these platforms of strong action if any attempt was made to influence the country's electoral process through undesirable means.

Social media giants like Google, Facebook, and Twitter, on their part, have been expanding their efforts in collaborating with third-party partners to verify content to combat spread of "fake news" on digital platforms, especially ahead of general elections. These companies have also promised to infuse more transparency into political advertisements on their platform, and announced a slew of other measures as part of their election integrity efforts.