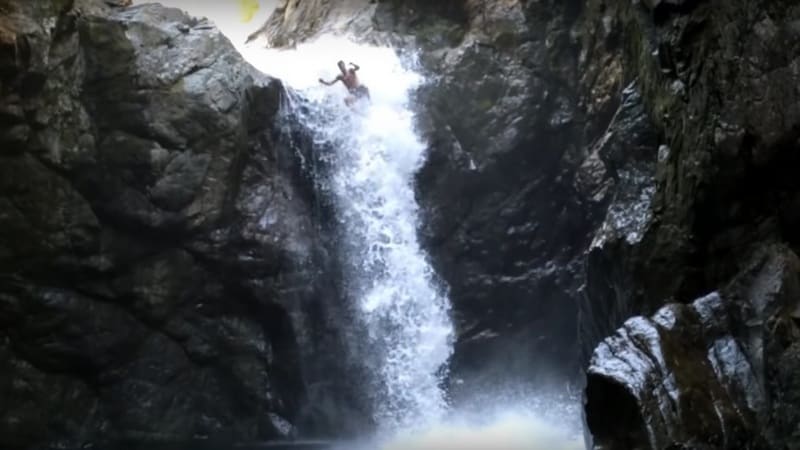 Screenshot from a video on the YouTube channel High On Life

Megan Scraper was standing at the edge of the scenic but treacherous Shannon Falls when she slipped into a swift-moving current, authorities in British Columbia said. Her companions, Ryker Gamble and Alexey Lyakh, dove in to save her, but none of them were a match for the power of the rapids. Moments later, all three were sucked beneath the water's surface, then plummeted over a 100-foot waterfall.

Their deaths on July 3 are a tragedy, but one that has been shrouded in controversy, because the three were associated with High on Life. Members of the group travel to exotic locales and, at times, vault guardrails and ignore warning signs as they dive from cliffs and swing through canyons - always with cameras recording for YouTube and Instagram followers.

Royal Canadian Mounted Police Cpl. Sascha Banks told the Associated Press that Scraper, Gamble and Lyakh had been swimming in a pool system at the top of the falls, "and then walking along the ledge shortly thereafter" they fell nearly 100 feet.

The local medical examiner is trying to determine whether they were filming just before going into the water.

High on Life's Instagram page has more than 1.1 million followers. And its YouTube channel includes videos that make no secret of the dangers members court in the name of adventure: "World's SCARIEST Rope Swing!!" and "Epic Cliff Jumping and Waterfall Slide (EXTREME DANGER)."

But on Saturday, the most recent video was somber.

Seven grief-stricken young men - one wearing a "High on Life" shirt, another with an arm in a brace - cried as one recited words written by Gamble about rejecting convention and leading a life worth living:

"Accept the fact that everything that makes up your world is there because you attracted it with your own thoughts. Realise that you can control your thoughts and emotions."

Later, the speaker added: "The world has lost a great deal of light with their passing. They lived every single day to its fullest. They stood for positivity, courage, and living the best life that you can. And they shared and taught their values to millions of people worldwide."

The video encouraged High on Life's significant following to contribute to a GoFundMe that would "align with the values and aspirations of Ryker, Alexey and Megan - empowering others to pursue their passions and dreams, and to live life to the fullest."

The GoFundMe had raised thousands, but underneath the video, the debate raged.

Some said they had been inspired by Gamble and others, and tried to heed the message of leading an unconventional life filled with adventure. But others said the exploits were pointless and dangerous vanity, putting young lives at risk for bragging rights and YouTube views.

Surely, critics argued, a person can live an inspired life and avoid mortal danger at the same time.

"Positivity and stepping out of your comfort zone means knowing not only you are risking your life but also you are throwing it away for followers ????" one person asked under the tearful memorial video. "I am sorry but it doesnt reasonate [sic] with someone who wants to live their lives at their fullest."

Their antics have also landed them in prison. Last year, Gamble and Lyakh were sentenced to prison and banned from US public lands for five years after they walked off the boardwalk at Yellowstone National Park to get dangerously close to a geothermal feature and biked off the roadway at Death Valley National Park in California, according to the Canadian Broadcasting Corp.

Authorities used videos and photos uploaded to the High on Life Facebook page as proof of their crimes. High on Lifers have also been accused of going out of bounds at Machu Picchu, the Canadian Broadcasting Corp. reported, contributing to sour feelings about ill-behaving foreigners at historical and sacred sites.

Others questioned the timing of the GoFundMe campaign and wondered whether any donated money would just encourage more recklessness.

"Why . . . are y'all asking for money? 'empowering others to pursue their passions and dreams, and to live life to the fullest' just means giving people like you money to travel irresponsibly right?" one commenter said.

They are not the only people to be criticised for a life-ending grab at Internet fame.

On Thursday, 25-year-old Jackson Coe fell to his death from a six-story building in New York City, according to the New York Post. He was a known daredevil who posted photos of his antics, including dangling his legs off the side of a skyscraper. After his death, one person had posted a comment on that picture: "This is very sad because it didn't have to happen."

Last summer, Pedro Ruiz III's plan to become an Internet sensation involved a .50-caliber pistol pointed squarely at his chest and part of an encyclopedia that he convinced his girlfriend would stop the bullet.

It didn't. He died at the scene on a June day in 2017 as two cameras recorded the deadly stunt in rural Minnesota, as The Washington Post's Katie Mettler and Lindsey Bever wrote. His girlfriend pleaded guilty to involuntary manslaughter in his death, which happened three months before the birth of their second child.

"I said, 'Don't do it, don't do it,' " Ruiz's aunt, Claudia Ruiz, told her nephew when he shared his idea, according to Valley News Live. "Why are you going to use a gun? Why?"

His response, she said: "Because, we want more viewers."