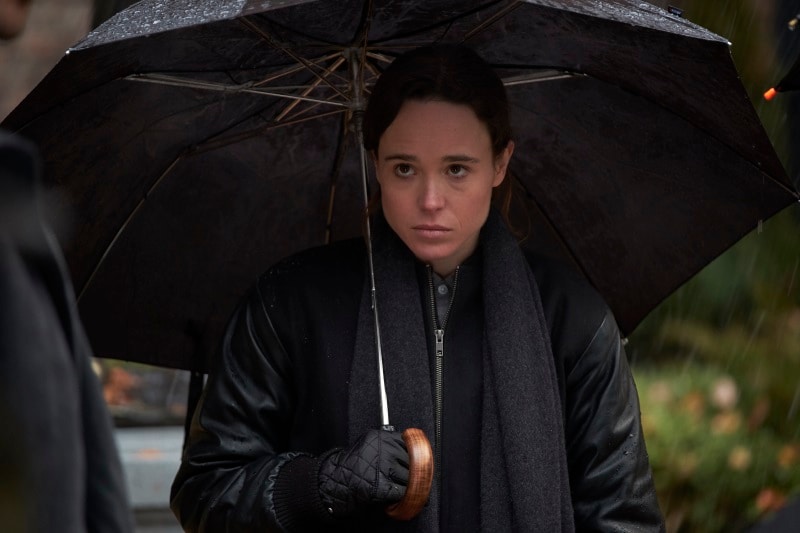 Ellen Page in The Umbrella Academy on Netflix

Netflix has released a new behind-the-scenes look at its upcoming adaptation of The Umbrella Academy, based on the comic book series of the same name created by Gerard Way, the frontman of the now-disbanded My Chemical Romance, and illustrator Gabriel Bá. It features the showrunner Steve Blackman (Fargo) and much of the cast — Ellen Page (Inception), Emmy Raver-Lampman, David Castañeda (Sicario: Day of the Soldado), Tom Hopper (Black Sails), Robert Sheehan (Misfits), Aidan Gallagher, singer Mary J. Blige, and Cameron Britton (Mindhunter) — talking about the premise, characters, and its appeal.

“It's a story that feels like this very contemporary dysfunctional family amongst a world full of fantasy and excitement,” Page says in the two-minute Umbrella Academy behind-the-scenes clip. The new Netflix series is about half a dozen adoptive siblings who reunite after their father's death to solve a mystery and thwart an imminent global apocalypse. Castañeda notes how “their father never actually gave them affection and love” because of which, Hopper adds: “They have all been messed up from the way they were raised. And they have all got these problems now, as adults.”

Hopper says later that The Umbrella Academy is “packed with action”, before Castañeda teases where the characters are headed: “They still have to solve a lot of things between themselves in order for them to kind of move forward.” Towards the end, Britton says of the show's appeal: “I think anybody who loves something that's just off-centre, is going to love Umbrella Academy.”

Here's the official synopsis for The Umbrella Academy, from Netflix:

“On the same day in 1989, forty-three infants are inexplicably born to random, unconnected women who showed no signs of pregnancy the day before. Seven are adopted by a billionaire who creates The Umbrella Academy and prepares his "children" to save the world. Now, the six surviving members reunite upon the news of their father's passing and must work together to solve a mystery surrounding his death. But the estranged family begins to come apart due to their divergent personalities and abilities, not to mention the imminent threat of a global apocalypse.”