“It’s everything that the prequels hang on, is that one particular fight,” says Star Wars veteran Dave Filoni. 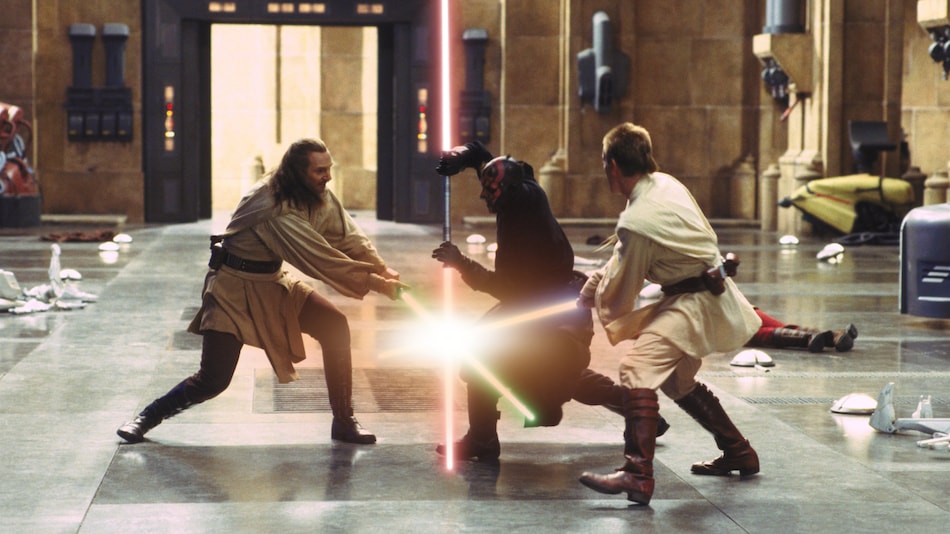 Star Wars: Episode I – The Phantom Menace is easily one of the — if not the most — hated films in the Skywalker saga. Some of that is down to Jar Jar Binks and the slapstick nature of everything around him, but the bigger problem is the writing, be it poor dialogues and character sketches, or the unnecessary explanations and story. No wonder then that The Phantom Menace has no place in the Star Wars' Machete order viewing sequence, where it is skipped entirely. At the same time, The Phantom Menace also boasts one of the best lightsaber fights in the history of Star Wars. But to hear it from Star Wars veteran Dave Filoni, it's a lot more than that.

How to Watch Star Wars Movies in the ‘Machete Order'

On the second episode of the behind-the-scenes docu-series Disney Gallery: The Mandalorian — released last Friday on Disney+ Hotstar in India — Filoni sat down with The Mandalorian creator and showrunner Jon Favreau, and fellow The Mandalorian directors Taika Waititi, Bryce Dallas Howard, Deborah Chow, and Rick Famuyiwa. In the final stretch of the episode, around the 22:15 mark on Disney+ Hotstar, Filoni explained why he believes the lightsaber battle between Darth Maul, Qui-Gon, and Obi-Wan Kenobi is the most important moment in the Star Wars prequel trilogy.

“In Phantom Menace, you're watching these two Jedi and they try and fight this evil villain,” Filoni said. He has worked on Star Wars: The Clone Wars, and is the creator of Star Wars Rebels and Star Wars Resistance. “Maul couldn't be more obviously the villain. He's designed to look evil. And he is evil, and he expresses that from his face, all the way up to the type of lightsaber he fights with.

“What's at stake is really how Anakin [Skywalker] is gonna turn out, because Qui-Gon is different than the rest of the Jedi, you get that in the movie. And Qui-Gon is fighting because he knows he's the father that Anakin needs. Because Qui-Gon hasn't given up on the fact that Jedi are supposed to actually care and love, and that that's not a bad thing.

“The rest of the Jedi are so detached, and they've become so political that they've really lost their way. And Yoda starts to see that in the second film. But Qui-Gon is ahead of them all. That's why he's not part of the council, so he's fighting for Anakin. And that's why it's the ‘Duel of the Fates'.

“It's the fate of this child. And depending on how this fight goes, Anakin's life is going to be dramatically different. So, Qui-Gon loses, of course. So the father figure, ‘cause he knew what it meant to take this kid away from his mother when he had an attachment, and he's left with Obi-Wan.

“Obi-Wan trains Anakin at first out of a promise he makes to Qui-Gon, not because he cares about him. When they find Anakin on Tatooine, he says, ‘Why do I feel like we've found another useless lifeform?' He's comparing Anakin to Jar Jar. And he's saying, ‘This is a waste of time. Why are we doing this? Why do you see importance in these creatures like Jar Jar Binks and this 10-year-old boy? This is useless.'

“So he's a brother to Anakin, eventually, but he's not a father figure. That's a failing for Anakin. He doesn't have the family that he needs. He loses his mother in the next film [Episode II: Attack of the Clones]. He fails on this promise that he made, ‘Mother, I will come back and save you.' So he's left completely vulnerable.

“And Star Wars ultimately is about family. So that moment in that movie [The Phantom Menace], which a lot of people I think diminish as, ‘Oh, it's just a cool lightsaber fight.' But it's everything that the entire three films of the prequels hangs on, is that one particular fight.”

If you don't have a subscription to Disney+ Hotstar, you can watch Filoni talk about the scene here:

People were too busy arguing about Jar Jar Binks to notice this. pic.twitter.com/ihuGXQdgiT