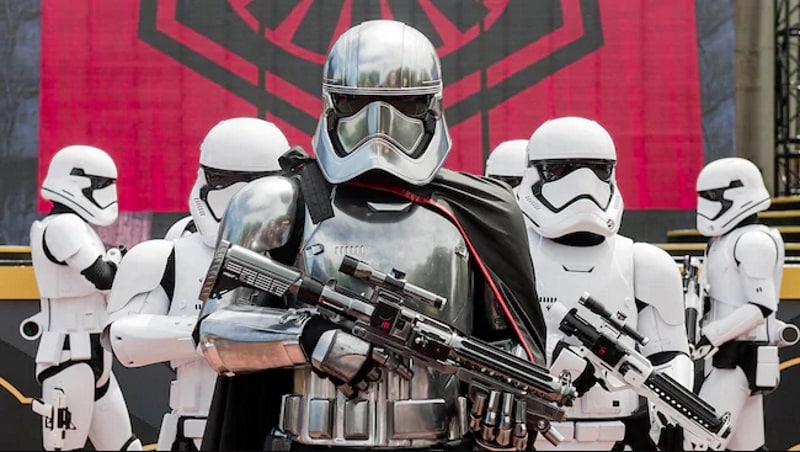 Disney on Thursday announced plans for a new Star Wars film trilogy and a live-action TV series as it builds on the beloved and profitable science fiction franchise.

"We have big ambitions for the Star Wars franchise," Disney chief executive Robert Iger said during a quarterly earnings call.

Disney just closed a deal with Rian Johnson, director of upcoming film "The Last Jedi," to develop a brand new trilogy, according to Iger.

"We're also planning to produce a number of original series for the new service and are already developing a Star Wars live-action series," Iger said of a planned direct-to-consumer pay service offering television and film content.

While there have previously been animated Star Wars series, this will be the franchise's first live-action show for the small screen.

The Star Wars franchise has been "exceeding expectations" since Disney acquired Lucasfilm five years ago, according to Iger.

Disney touted the box office success of two new Star Wars films and expressed confidence that "The Last Jedi," set to debut in theaters next month, would be a hit.

"The excitement will only intensify as we get closer to the release date," Iger said of the coming instalment.

Going 'Solo'
Production recently wrapped on a film based on the story of Han Solo, who was played by actor Harrison Ford in the original trilogy as well as in 2015's "The Force Awakens," according to Disney executives.

"Solo" is the second movie of a saga that unfolds on the sidelines of the adventures of the Skywalker family, the primary protagonists of the Star Wars universe. The first was "Rogue One," which came out in 2016 and raked in more than $1 billion at the box office.

"We've got more great Star Wars movies already planned for years to come in addition to the 2019 release of Episode IX," Iger said, referring to the film that will follow "The Last Jedi."

Star Wars has grown into the most lucrative and influential movie franchise of all time since the original film was released in 1977. It has become ingrained in a geek culture that gave rise to Silicon Valley and disruptive technologies.

Californian filmmaker George Lucas was 33 years old when he prepared to release his third feature -- a far-fetched, slightly corny intergalactic saga of good and evil starring a sulky farm boy with daddy issues.

"I'm running out of hyperbolic adjectives to describe the power of Star Wars, but that's because it is the ultimate standard-bearer," Shawn Robbins, chief analyst for BoxOffice.com, told AFP in an earlier interview marking the 40th anniversary of the original film.

"Four decades of record-breaking, genre-defining entertainment across film, television, video games, toys, books and everything else the brand has touched simply speaks for itself."

The Force is strong
Lucasfilm debuted its highly-anticipated second trailer for "Star Wars: The Last Jedi" last month, hinting at dark times ahead for the Resistance and possibly even the end of Leia Organa, one of the main characters in the first three films who returned along with Han Solo in "The Force Awakens."

The clip for the eighth installment in the blockbuster space opera, due for release on December 15, followed a trailer released in April which teased Luke Skywalker, the star of the original trilogy, teaching newcomer Rey the ways of the Force.

This time around more plot was unveiled, with Luke telling Rey he'd only seen power like hers once before - and while it didn't scare him enough then, it does now.

Fans speculated on social media that he could be talking about his nephew and Rey's nemesis Kylo Ren, who is seen in a TIE fighter with his mother General Leia Organa in his sights, his eyes welling up as he prepares to open fire.

Carrie Fisher - who has played the character since she was known simply as Princess Leia in the original 1977-83 trilogy - died in December, having already wrapped her scenes for "The Last Jedi."

"The Last Jedi" - filmed on the west coast of Ireland and at Pinewood Studios near London - sees the return of the characters introduced in 2015's seventh installment.

Johnson will write and direct the first installment of the new Star Wars trilogy in a collaboration with Ram Bergman, who will produce the film, according to a release posted online.

"We had the time of our lives collaborating with Lucasfilm and Disney on 'The Last Jedi'," Johnson and Bergman said in a joint statement.

"Star Wars is the greatest modern mythology and we feel very lucky to have contributed to it. We can't wait to continue with this new series of films."