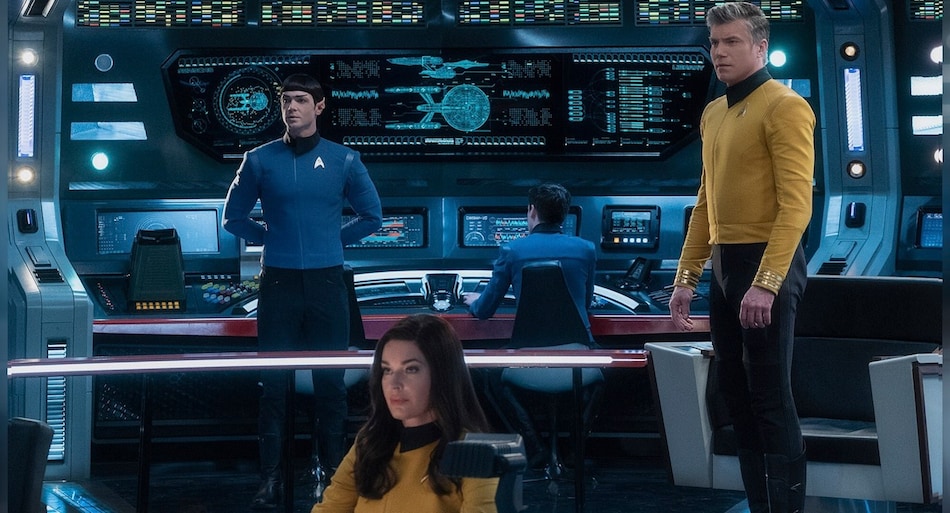 Spock, Number One, and Pike in Star Trek: Discovery season 2

“This is a dream come true, literally,” Star Trek: Strange New Worlds co-creator and executive producer Akiva Goldsman said in a prepared statement. “I have imagined myself on the bridge of the Enterprise since the early 1970s. I'm honoured to be a part of this continuing journey along with [fellow executive producers] Alex [Kurtzman], Henry [Alonso Myers], and the fine folks at CBS.”

“We're going to try to harken back to some classical Trek values, to be optimistic, and to be more episodic,” Goldsman told Variety. “Obviously, we will take advantage of the serialised nature of character and story building. But I think our plots will be more closed-ended than you've seen in either [Star Trek:] Discovery or [Star Trek:] Picard.”

“When we said we heard the fans' outpouring of love for Pike, Number One and Spock when they boarded Star Trek: Discovery last season, we meant it,” Kurtzman said in a prepared statement. “These iconic characters have a deep history in Star Trek canon, yet so much of their stories has yet to be told. With Akiva and Henry at the helm, the Enterprise, its crew and its fans are in for an extraordinary journey to new frontiers in the Star Trek universe.”

CBS All Access' executive VP and programming head, Julie McNamara, added: “Fans fell in love with Anson Mount, Rebecca Romijn and Ethan Peck's portrayals of these iconic characters when they were first introduced on Star Trek: Discovery last season. This new series will be a perfect complement to the franchise, bringing a whole new perspective and series of adventures to Star Trek.”

Star Trek: Strange New Worlds joins an ever-growing list of Trek series on CBS All Access, alongside the aforementioned Star Trek: Discovery, which kicked things off in September 2017, followed by Star Trek: Picard in January 2020. Beyond that, we've the animated series, Star Trek: Lower Decks, from Mike McMahan (Rick and Morty), and the Michelle Yeoh-led spin-off series from Star Trek: Discovery writing duo Bo Yeon Kim and Erika Lippoldt. And if we're counting Trek for kids, there's an animated series in the works at Nickelodeon as well.

There's no word on a filming start date, let alone a release date, on Star Trek: Strange New Worlds due to the ongoing coronavirus pandemic. There's also no word on the international platforms for Star Trek: Strange New Worlds. (CBS All Access is only available in the US, Australia, and Canada). Previous Trek shows are split between Netflix (Discovery) and Amazon Prime Video (Picard) in India.