Spotify Premium India Annual Plan Down to Rs. 699, a Saving of Up to 50 Percent 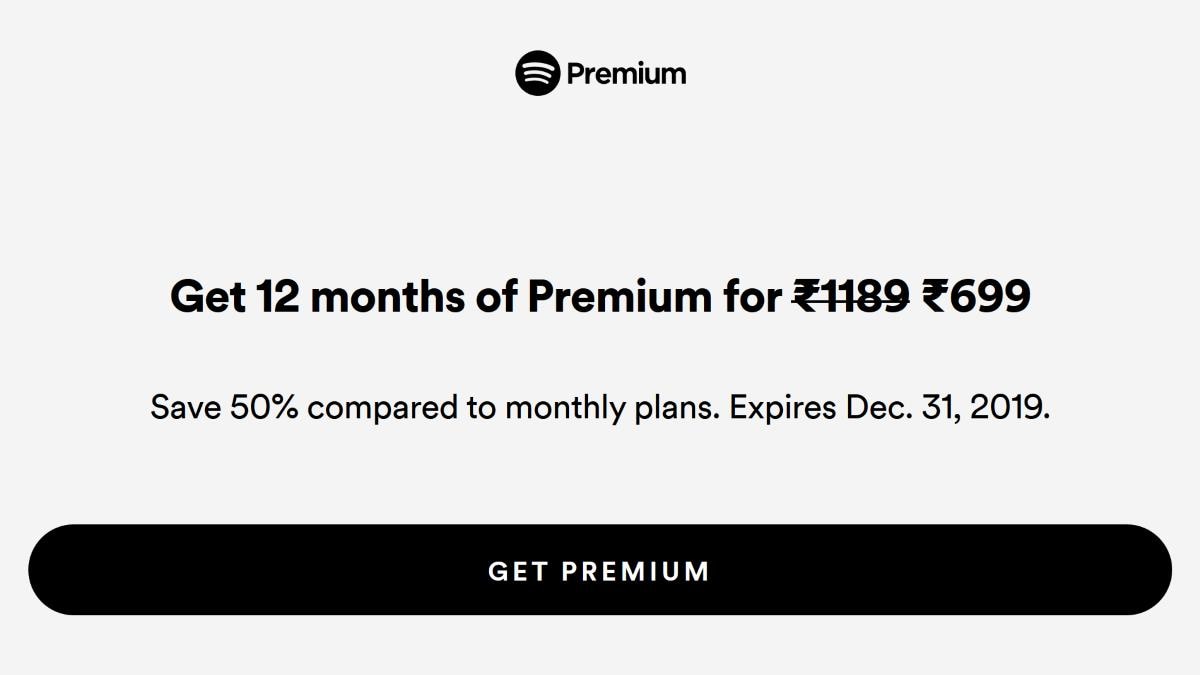 In time for Christmas, Spotify has discounted its annual subscription by 40 percent. Instead of Rs. 1,189 for the full year, it is now available for just Rs. 699. For those that were on the monthly Rs. 119 subscription — that comes to Rs. 1,428 for 12 months — it represents an effective saving of 50 percent. Or see it this way, the Spotify India annual subscription is currently cheaper than the six-month plan, which costs Rs. 719. Unfortunately, the new discount is not applicable to Spotify family plans or those who registered onto Spotify via a third-party reseller. The new discount expires New Year's Eve, December 31, so you've plenty of time to decide if you want to get on it.

Spotify's new limited-time discount on yearly Spotify Premium subscription in India brings it closer to the annual offerings of its local competition in the country. Soon after the arrival of Spotify and YouTube Music in India, both Times Internet-owned Gaana and Reliance Industries-owned JioSaavn discounted their annual plans to Rs. 399 and Rs. 299, respectively. The prices have stayed that way for months. Others in Apple Music (Rs. 999 a year) haven't either subscribed to such practices, or — Amazon Music, YouTube Music, and Wynk — don't offer annual plans.

On one hand, the new Rs. 699 Spotify annual subscription is tempting considering the breadth of its app portfolio, and the quality of user interface and user design are much better than the likes of Gaana and JioSaavn. But on the other, it's worth noting that millions of songs are still missing from Spotify in India, thanks to the tiff — an ongoing lawsuit or licensing agreement troubles — with Warner Music Group and Saregama. There's been no news on either front since the early months of Spotify's launch in India, and it's unclear if there's an end in sight to either battle.

And oh, if you're wondering what happens after this new discounted Spotify Premium annual plan runs out next year, existing subscribers will be knocked back to their old plans at the price in effect then, while new subscribers will return to a free Spotify account.