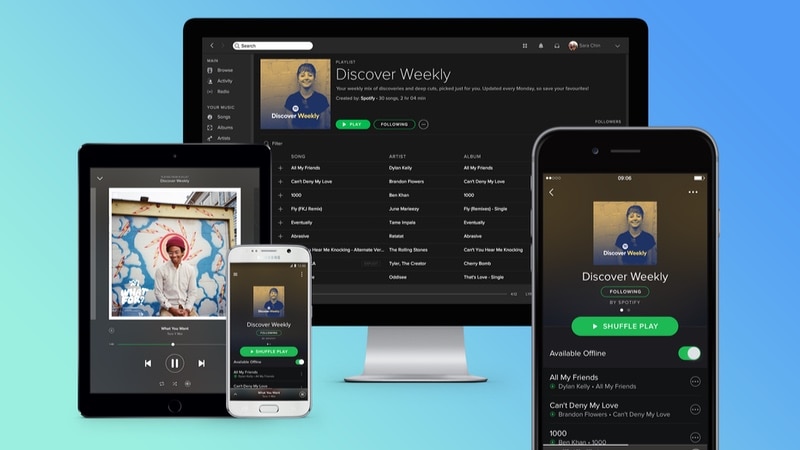 Music streaming service Spotify has officially launched in India, in both free and paid tiers. Spotify Premium India subscription price is Rs. 119 per month and Rs. 1,189 per year. Spotify also offers top-up packs for those who don't want to pay for a recurring subscription. These top packs start at as little as Rs. 13 for one day and can cost as much as Rs. 719 for six months. Spotify is offering a student discount in India as well and the price for students is Rs. 59 per month (monthly subscription) or Rs. 66 for a one-month top-up. Spotify's family subscription is currently unavailable in India and Spotify told Gadgets 360 that it has nothing to announce in this regard at the moment.

Sweden-based Spotify is the music streaming service with the highest number of paying subscribers in the world. India is the 79th country that Spotify has launched in globally, and the 11th country to get the service in Asia. In India, Spotify says it is offering more than 40 million songs and 3 billion playlists. Spotify is known for music streaming but it also features podcasts.

The music streaming service is known for its algorithm-based music recommendations engine, which curates music to your taste. The service cam be used on Web, Android and iOS, but it also has apps on various other platforms such as Xbox One, Windows 10, smart TVs, etc. Its apps for Amazon Echo and Google Home are not available in India at the moment, but Spotify says it is working on getting these to the country asap. The service is claimed to be available on over 500 products across 200 hardware brands globally.

For its India launch, Spotify has offered some localisations on its apps. Once you tap the Search button, you'll see Bollywood, Punjabi, Tamil, and Telegu, among other categories. This will vary based on your preferences, but there is a clear attempt to help people discover Indian music. In India, users can also choose from playlists of songs from movies, actors, as well as new city-based playlists tracking what's trending in cities like Bengaluru, Chennai, Delhi, and Mumbai.

Just like in other markets, Spotify has brought an ad-supported free tier to India. Spotify Premium on the other hand gives users access to features like offline mode, improved sound quality, Spotify Connect, and ad-free listening. In India, the free tier is better than other countries, as for the first time, it lets users stream 'every song' on demand. In other markets, playlists are locked to 'shuffle play'.

While Spotify officially launched today, its apps have been available on Android and iOS since yesterday. These allowed us to sign up and verify Spotify's India price and payment methods as well. When it comes to payment options, Spotify only accepts credit and debit cards - Visa or Mastercard - for its recurring monthly subscription in India. It doesn't support cards from other providers at the moment. For all other plans including the annual subscription and one-time packs, users can opt for credit or debit cards, Paytm, and UPI.

Spotify's India pricing makes it one of the most expensive music streaming services in India. The company said it is working on localising its apps by adding support for Indian languages but this feature doesn't yet have a launch date. Spotify has 96 million paying subscribers and 207 million users, the company reiterated.

Spotify's India launch has been in the works for quite a while, with its CEO Daniel Ek acknowledging this in March 2018. More recently, Warner Music sued Spotify over licensing rights in India. The legal dispute between Warner Music and Spotify appears to be ongoing but that hasn't stopped Spotify from launching in the country.

Ek in a prepared statement said, "As Spotify grows, our goal is to bring millions of artists and billions of fans together from every country and background. India has an incredibly rich music culture and  to best serve this market, we're launching a custom-built experience. Not only will Spotify bring Indian artists to the world, we'll also bring the world's music to fans across India. Spotify's music family just got a whole lot bigger."

Amarjit Singh Batra, Managing Director, Spotify India, added, "Spotify pioneered music streaming a decade ago, and has constantly reinvented itself to bring the best music experience to the world, and now to India. Through our unmatched personalised experience, we want users to find the best music from India and the world, and empower Indian artists to find new audiences in India and worldwide."

Written with inputs from Abhinav Lal and Akhil Arora

Disclosure: Paytm's parent company One 97 is an investor in Gadgets 360.​