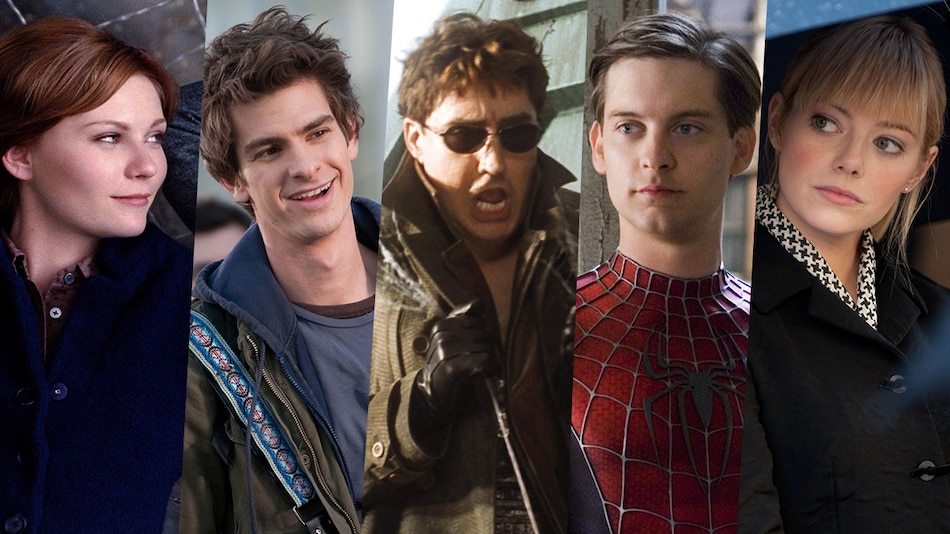 Spider-Man 3 is going all the way. Andrew Garfield, Tobey Maguire, Emma Stone, Kirsten Dunst, and Alfred Molina — they have played Peter Parker, Peter Parker, Gwen Stacy, Mary Jane, and Doctor Octopus, respectively, in earlier Spider-Man movies — are reportedly in talks to join the cast of the next Spider-Man movie in the Marvel Cinematic Universe. That is a lot of stars. And all three Parkers in one film. Moreover, it essentially reiterates that Spider-Man 3 is going to delve into the multiverse concept that was set up by Avengers: Endgame and confirmed in its immediate MCU follow-up and Spider-Man predecessor, Spider-Man: Far From Home.

Collider brings word of the new casting developments on the as-yet untitled Spider-Man 3. Garfield, Dunst, and Molina are confirmed, the report says. Maguire's presence is pending a deal currently being worked out by Sony Pictures and Marvel Studios, while Stone's appearance revolves around her pregnancy, Collider adds. There's no word on the extent of their roles, though given the overcrowded nature of Spider-Man 3 — Benedict Cumberbatch's Doctor Strange, and Jamie Foxx's Electro are also involved, in addition to the returning cast of Spider-Man: Far From Home — it's quite likely that these big stars will be limited to a cameo or a little more.

If all of this goes according to plan, Spider-Man 3 is going to be a bonkers of a movie, one that clearly seems to be drawing on the idea pioneered by its animation counterpart, the Oscar-winning Spider-Man: Into the Spider-Verse. It will be interesting to see how the new film depicts these characters we haven't known for a while. While Garfield, Stone, and Foxx's characters haven't been seen for seven years (by the time the next Spider-Man movie comes out), it'll have been 14 years for Maguire and Dunst's Parker and Jane, and 17 years for Molina's Doc Ock, who was seen in the memorable Spider-Man 2.

In addition to Garfield, Maguire, Stone, Dunst, Molina, Cumberbatch, and Foxx, Spider-Man 3 cast also includes Tom Holland as MCU's Peter Parker, Zendaya as MJ, Jacob Batalon as Ned Leeds, Marisa Tomei as May Parker, and Tony Revolori as Eugene “Flash” Thompson. Jon Watts is returning as the director, working off a script by Chris McKenna and Erik Sommers. Kevin Feige and Amy Pascal are producing Spider-Man 3, which began filming in late October (delayed three months due to COVID-19) in the US city of Atlanta, and will continue in Los Angeles and Iceland, before wrapping up in March 2021.

Spider-Man 3 is currently slated to release December 17, 2021 in cinemas worldwide.