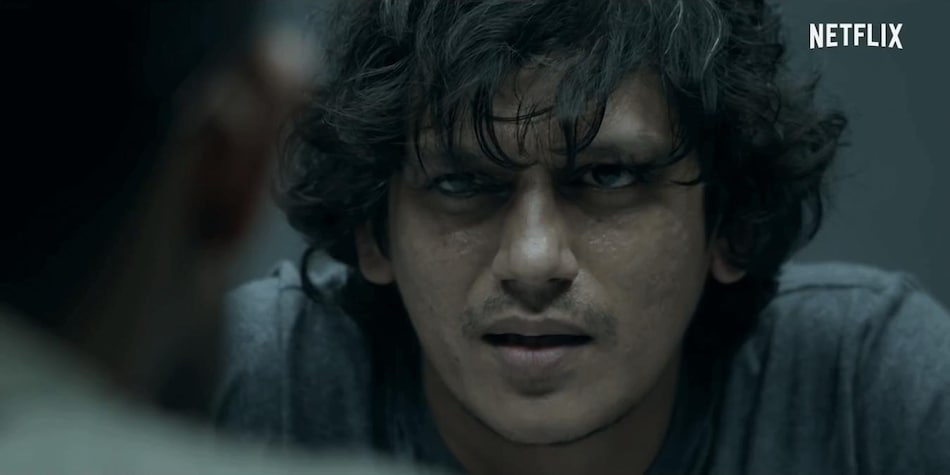 Vijay Varma in the She trailer

Netflix has unveiled a release date — March 20 — and a trailer for She, its next original series from India that has been written by Imtiaz Ali (Love Aaj Kal), about a female constable, “sent on an undercover mission to bust an underworld gang,” who “rises above her own expectations to find power in the most unexpected ways.” The crime thriller drama stars Aaditi Pohankar (Lai Bhaari) as Bhumika Pardesi, senior constable at Reay Road Police in Mumbai; and Vijay Varma (Gully Boy) as a thief. She is “from the makers of Andhadhun, Tamasha, and Jamtara”, which translates as that it's produced by those at Viacom18 Motion Pictures, Tipping Point, and Ali.

The first She trailer opens by introducing a big narcotics dealer called Sasya, which involves Varma's character, who will spill the beans to the police but only to Bhumika, who went undercover as a sex worker to nab him. There are questions raised over women's presence in the police and a senior officer wonders if she can withstand the pressure of her next undercover assignment. A subordinate reassures him by saying they will be “her brains and hands”, but the senior officer is not so sure: “She'll get herself killed and we'll be responsible.” Bhumika soon finds herself in the deep end, with the contact to her handlers cut off as the criminals change things on the fly.

She will be the third Netflix series from India in 2020, after the Jharkhand-based phishing drama series Jamtara in January, and the romantic drama series Taj Mahal 1989 on Valentine's Day, both also from Viacom18 and Tipping Point.

Here's the official description for She, from Netflix:

“An undercover assignment to expose a drug ring becomes a timid Mumbai constable's road to empowerment as she realizes her dormant sexuality's potential.”

All episodes of She are out March 20 on Netflix in India and across the world.