Neil Gaiman reveals all 12 characters with insights into their audition and acting. 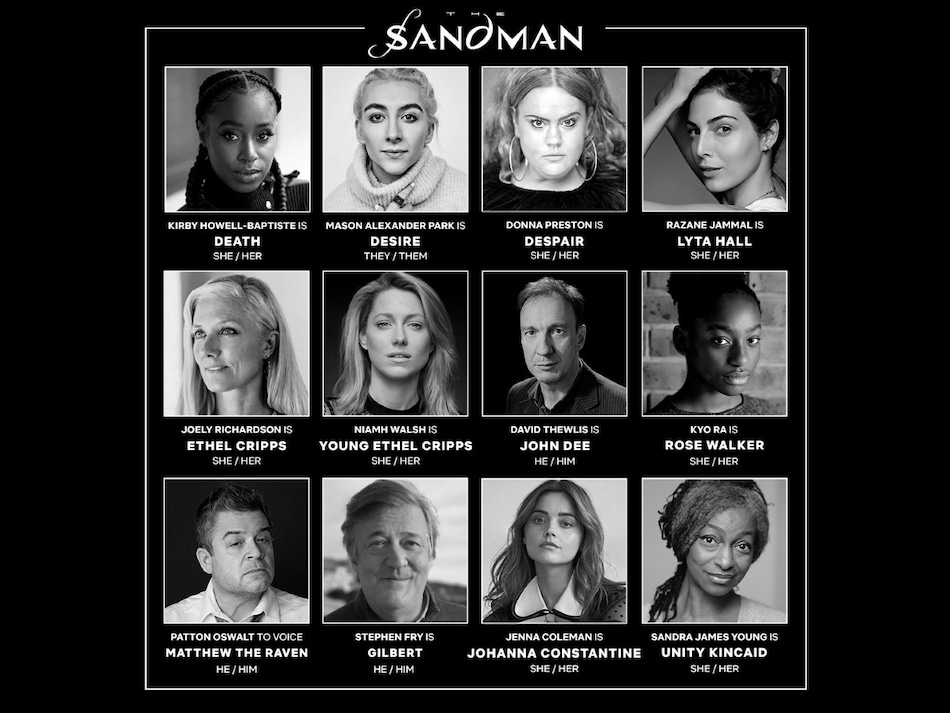 They join Tom Sturridge (Being Julia) as Dream of the Endless, Gwendolyn Christie (Game of Thrones) as Lucifer, Sanjeev Bhaskar (The Kumars at No. 42) as Cain, Asim Chaudhry (People Just Do Nothing) as Abel, Charles Dance (Game of Thrones) as Roderick Burgess, Vivienne Acheampong (The Witches) as Lucienne, and Boyd Holbrook (Narcos) as The Corinthian. In a blog post for Netflix, Gaiman talked about each of the 12 new The Sandman cast members, their characters, and a little about their audition or acting. He also teased that more cast members will be announced as The Sandman continues to film. Gaiman has seen a few finished episodes.

Howell-Baptiste is playing Death, Dream's “wiser, nicer, and much more sensible sister.” Hundreds of women auditioned for the role but none of them were right, Gaiman noted, until they saw her audition. We needed “someone who could speak the truth to Dream, on the one hand, but also be the person you'd want to meet when your life was done on the other.” Alexander Park is Desire, Dream's sibling and “everything you want, whatever you want and whoever you are.” They reached out over Twitter, Gaiman said, in what is certainly an unusual way to get a part. Preston is playing Despair, Desire's twin and Dream's sister. Gaiman called her performance “chilling and sad.”

Coleman is in the role of Johanna Constantine, an occult adventuress who had her own The Sandman spin-off series. Gaiman called her “the Johanna of our dreams – tough, brilliant, tricky, haunted and probably doomed.” Burgess' love Ethel Cripps is played by Walsh in the 1920s and 1930s, with Richardson taking over in present day. Thewlis plays Cripps' son John Dee, dangerous and driven mad, out on a “quest for Truth that may destroy the world.”

The rest of them are part of The Sandman's second major storyline The Doll's House, that Gaiman noted is currently filming. Ra is Rose Walker, a young woman on a “desperate search for her missing brother, who finds a family she didn't know that she had, and a connection to Dream that neither of them can escape.” Jammal plays Rose's friend Lyta Hall, a young widow mourning her husband Hector who starts showing up in her dreams. Gaiman called Jammal “terrific.” James Young takes on Unity Kinkaid, an heiress and Rose's mysterious benefactor who spent a century sleeping.

Fry takes on the role of Rose Walker's debonair protector Gilbert who is a dab hand with a paradox and a sword cane. “Seeing him in costume and make up on the dailies made me blink: it was as if the comic had come to life,” Gaiman wrote. That leaves Oswalt, who is voicing Matthew the raven, Dream's trusted emissary. Oswalt is a big fan of The Sandman, and the first person they cast even before the series was pitched to Netflix, Gaiman noted.

The Sandman will premiere on Netflix worldwide. No release date has been set. Wonder Woman co-writer Allan Heinberg is developing the series, with Gaiman serving as executive producer alongside Heinberg and David S. Goyer.