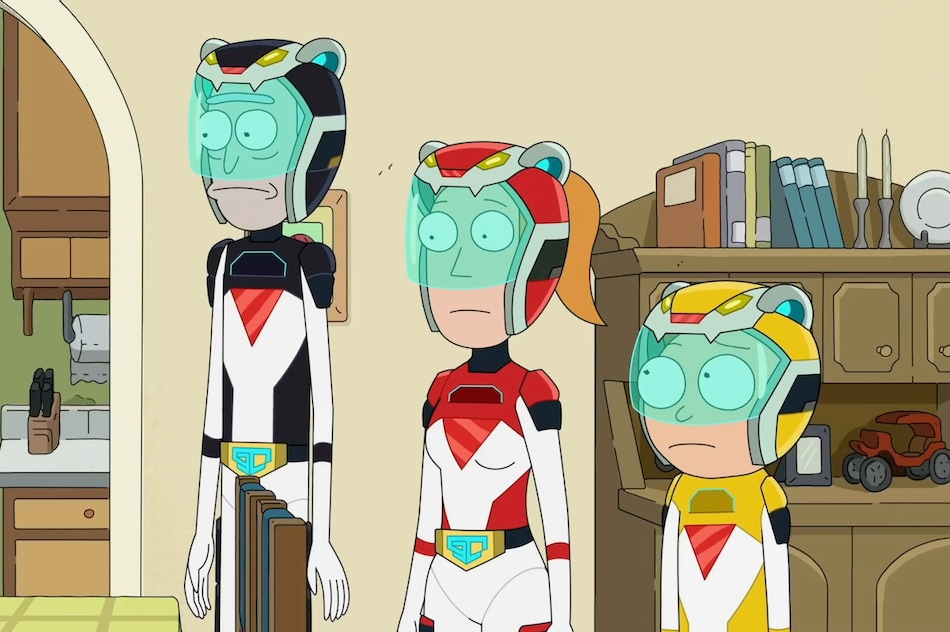 Rick, Summer, and Morty in Rick and Morty season 5 trailer

Rick and Morty season 5 gets a new trailer. Turn on your interdimensional cable channel everyone, Adult Swim has dropped a new wacky, mind-bending, and terrifying trailer for the upcoming Rick and Morty season. In it, Rick makes a Scarface joke, “Say hello to my little me!”, while holding a gun that has a head like his. The entire Smith family commands a Voltron and Pacific Rim-style Jaegar. Rick broils a turkey-man beast, and a superhero friend of Morty's fries American poachers in Africa. Morty complains how he hasn't been to a full week of school in years given all their intergalactic adventures. And Jerry Smith has a job interview that Rick finds very suspicious.

The new Rick and Morty season 5 trailer — set to the tunes of Beastie Boys' 1994 hit “Sabotage” — begins with the US military surrounding the Smith family home, with Rick Sanchez declaring inside as he slaps himself: “It's showtime.” In another scene, Summer Smith warns that someone is trying to kill them, only for Rick to remind her that someone is always trying to kill them. There are shots of humanoid turkeys with rifles and sunglasses, an Aquaman-of-sorts who lives inside a seashell, and a giant spider-like spaceship that bombs the Smith household.

Cut to the family dressed in multi-coloured suits, with Rick, Morty, and Summer announcing their new catchphrase (“Go team, go-tron!”) as metal tubes spring up from everywhere and suck them up individually. In another shot, Morty (somehow) laser blasts the US Constitution and Lincoln Memorial (in Washington, DC), Philadelphia's Liberty Bell, and New York's Statue of Liberty all in one fell swoop. There's also a shot out in America's Wild West with a crystalline Rick (pulling a gun out of his head) — is this supposed to be some kind of Breaking Bad reference?

The animated series is a creation of Justin Roiland and Dan Harmon, with Roiland also voicing the two titular leads. Chris Parnell (Jerry), Spencer Grammer (Summer), and Sarah Chalke (Beth Smith) fill out the rest of the main voice cast. Harmon will guest star as Rick's ally Birdperson / Phoenixperson, with Kari Wahlgren returning to voice Morty's long-time crush Jessica. No other guest stars have been announced. The 10-episode season 5 is part of Rick and Morty's giant 70-episode deal from 2018, and seasons six and seven are already confirmed to be in development.

Rick and Morty season 5 premieres June 20 on Adult Swim wherever available as part of a “global premiere.” New episodes will air every Sunday. Netflix has rights to Rick and Morty in several territories, including India, but it has yet to announce a release date of its own.