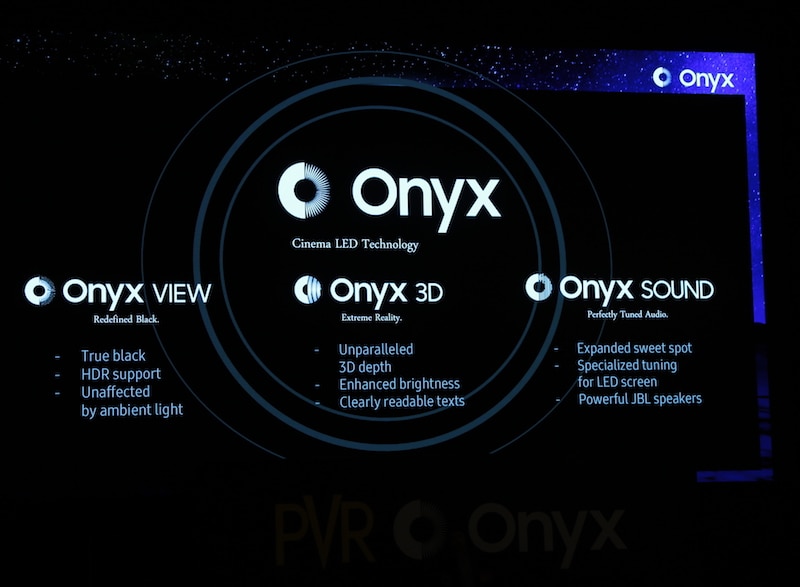 PVR Cinemas and Samsung on Monday announced the launch of India's first Onyx Cinema LED screen at PVR Icon in Delhi's Vasant Kunj. Samsung's technology eliminates the need for projection-based systems, bringing arguably the most significant enhancement to the movie viewing experience since the industry's inception over 120 years ago.

The underlying technology used in the Samsung Onyx Cinema LED screens is similar to the one on your TV screen, which means the theatre doesn't need to be pitch-dark for you to get the optimum viewing experience. Samsung also claims the new tech enables truer blacks, HDR support, as well as an enhanced 3D experience that's brighter and offers greater depth. All Onyx Cinema LED screens feature audio solutions by JBL, a brand that Samsung inherited as part of the Harman Global acquisition.

"This screen is one of first few screens launched worldwide by Samsung and we are thrilled to partner with one of India's biggest film entertainment company, PVR Cinemas to bring in this game changing technology for the movie lovers," says Puneet Sethi, Vice President, Consumer Electronics Enterprise Business, Samsung India.

Gadgets 360 spoke to Sethi and Sanjeev Bijli, Joint Managing Director, PVR Ltd. at the sidelines of the launch event in Delhi and we started by asking Bijli how the partnership came about. He revealed that PVR first got a demo of the technology at CinemaCon, and it was pretty much love at first sight, even as the two companies took the discussions forward.

"Within about half an hour of that demonstration, we believed that this was the technology that was really going to change the way people are going to be consuming movies and we were more than happy to possibly partner with Samsung on this one and be India's first LED screen provider," says Bijli.

We were curious if the new technology will impact how the movies are distributed, and Bijli explained that there'll no change in that regard.

As we mentioned earlier, unlike traditional projectors, the Samsung Onyx Cinema LED screen is unaffected by ambient lighting, which means the theatre can be well-lit even as a movie is being screened. This opens up additional revenue opportunities for companies like PVR, as the hall can be used for special events and screenings for kids, where it would helpful to have the lights on.

"This screen has a lot of versatility to offer and we believe these screens would help us garner more revenue," says Bijli.

He added that the PVR at High Street Phoenix in Mumbai's Lower Parel will be the next to deploy Samsung's Onyx Cinema LED screen. The company will adopt a wait-and-watch approach to see how the consumers respond before expanding it further, Bijli said, but said the technology could be seen at 15-20 of PVR's premium properties for the next two years.