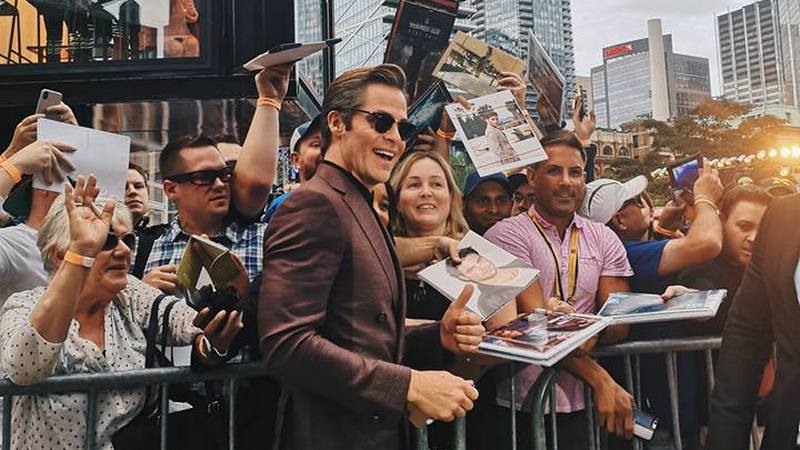 The Toronto International Film Festival launched on Thursday with a Netflix production - the first time any major movie showcase has opened on a release not intended for theatres.

Cannes, the world's largest film festival, issued a decree earlier this year banning movies from competition that do not have a theatrical release in France.

But in an apparent rebuke, the 43rd TIFF opens with Netflix's Outlaw King, which will be available only to subscribers of the streaming giant.

"We went with the best film we could find that really fit the scale that we want for opening night," festival chief Cameron Bailey told AFP.

"It's a big period epic, a really rousing story of Robert the Bruce - a contemporary of William Wallace who audiences might remember from Braveheart," he said.

The epic story about Robert the Bruce's struggle to regain control of Scotland after England declares him an outlaw also stars Aaron Taylor-Johnson - also at the festival in A Million Little Pieces - Florence Pugh and Billy Howle.

Netflix pulled all its films from consideration at Cannes after the ban was announced on its non-theatrical releases. Bailey said however TIFF was "fully behind the theatrical experience."

"I think people are going to be thrilled to see films in the finest possible way you can present them which is in a great big old theater, with incredible sound," he said.

"But if the films come from a streaming service, that's just fine," he added.

More from Netflix
Bailey said online movie platforms such as Netflix, Amazon and Hulu were "supporting some of the best talent around these days."

"And we really value not only the theatrical experience but the ability of filmmakers to make the films they want to make. So whatever is going to get those films made, we are supportive of."

It is not the first time a Netflix film has screened at TIFF. Dee Rees's Mudbound and Angelina Jolie's First They Killed My Father premiered in Toronto last year, and Netflix also picked up the rights to several other films at the festival.

All are likely to bypass movie theatres.

"I cannot imagine a better place to have our world premiere," Mackenzie said in a statement.

"Scotland and Canada's histories are bound together, forged in the crucible of the struggles of history, bringing this day an affinity and sensibility that I hope will translate to a profound, visceral, and riotously entertaining experience," he added.

More than 300 feature and short films from 74 countries - 31,300 minutes of film in total - will be screened at TIFF, the biggest film festival in North America, which runs through September 16.

The Elephant Queen follows the journey of an elephant herd, while The Truth About Killer Robots is described as an "eye-opening work of science non-fiction."

Drake pulled out at the last minute Thursday from introducing Monsters and Men, about a Brooklyn community rocked by the fatal police shooting of a black man.

It was a blow to his fans, but also for TIFF, which was forced earlier this week to nix one of its Gala Presentations, Galveston, because director Melanie Laurent could not make the screening, citing "work commitments."

In past years, films such as Spotlight, Slumdog Millionaire, and The King's Speech went on from winning the Toronto festival's audience prize for best picture to take the top honour at the Oscars.

But many of the films positioned for accolades this year - including a remake of A Star is Born with Lady Gaga, Damien Chazelle's First Man starring Ryan Gosling as astronaut Neil Armstrong, and the western The Sisters Brothers starring John C. Reilly and Joaquin Phoenix - will have already premiered at the Venice or New York film festivals before they are screened in Toronto.