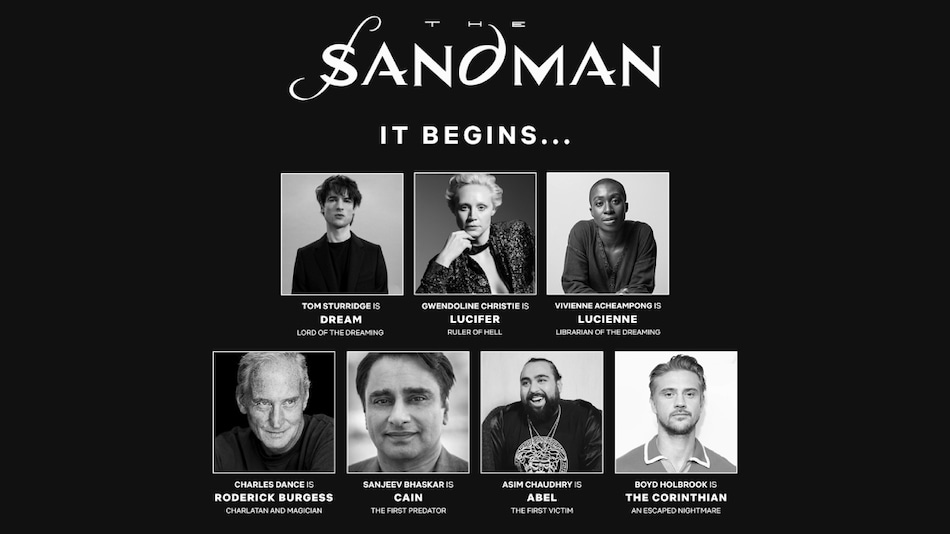 Netflix has named the main cast of its upcoming adaptation of Neil Gaimann's iconic graphic novel series, The Sandman, according to a tweet by the author himself. Tom Sturridge (Far from the Madding Crowd, On the Road) bagged the coveted role of series protagonist Dream (aka Morpheus), as Game of Thrones stars Charles Dance and Gwendoline Christie are set to play Roderick Burgess and Lucifer, respectively. The Sandman revolves around Dream, the personification of dreams, who escapes eons of imprisonment under the hands of a wizard and embarks on a journey to reclaim his ‘objects of power' by overcoming fantastical challenges and entities.

Gaimann shared a photo of the main cast via Twitter. The author wrote, “Here are the first seven members of the #Sandman cast to be announced officially. Seven down, hundreds to go.” As Gaimann pointed out, Netflix is yet to officially confirm the lineup for The Sandman.

There. A whole set of tweets written just before bed and set to go out when I'm fast asleep. I'm vaguely worried that I've mistimed them, but too late now. Here are the first seven members of the #Sandman cast to be announced officially. Seven down, hundreds to go. pic.twitter.com/DksGLyMkBf

Netflix and Warner Bros. Television confirmed the series adaptation in July 2019. Allan Heinberg (Wonder Woman) will be the showrunner and executive producer alongside Gaimann and David S. Goyer (The Dark Knight) are on board as showrunners. The trio will also be co-writers for the much-anticipated series.

Speaking on the adaptation, Gaimann said in a statement, “For the last 33 years, the Sandman characters have breathed and walked around and talked in my head. I'm unbelievably happy that now, finally, they get to step out of my head and into reality. I can't wait until the people out there get to see what we've been seeing as Dream and the rest of them take flesh, and the flesh belongs to some of the finest actors out there.”

The Sandman was first published in 1989, with the original series running for 75 issues until 1996. Its popularity paved the way for several spin-offs, published between 1993 and 2015.