Netflix will begin testing this feature for iOS users in the coming months. 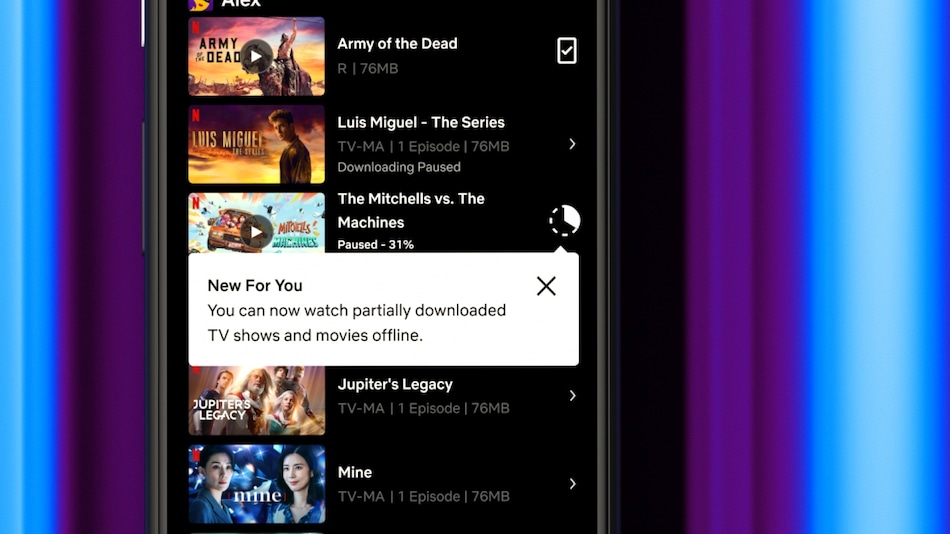 Netflix has introduced a new partial downloads feature for its Android users. This feature, as the name suggests, will enable users to watch partially downloaded shows, up until the point it has been downloaded. This wasn't possible before, as partially downloaded content could not be viewed offline until the download was complete. Netflix announced the download feature back in 2016 to enable offline streaming while in flight, on the bus or train, or in areas with limited connectivity.

With the partial downloads feature, Netflix takes its offline download feature up a notch by allowing users to watch incompletely downloaded content as well. Users can later finish downloading the entire episode or movie when they regain access to Internet and continue watching the rest of it. “We've improved the Netflix download experience so you can now start watching The Mitchells vs The Machines or the next episode of Luis Miguel - The Series even if it hasn't completed downloading. Once you've regained a strong enough connection, you can choose to finish the download and keep watching — avoiding those surprise notices that you've gone over your data limits,” Netflix explains in a blog post.

As mentioned, this feature is available for Netflix users on Android phone and tablets for now. The company will begin testing on iOS devices in the coming months. In February this year, Netflix introduced a new ‘Download For You' feature broadening its Smart Downloads experience. The company's algorithm understands your movie and show preferences and automatically downloads movies and TV shows that you might like, to help you in situations where you find yourself stuck without Internet access or in a long wait like the evening commute. Previously, Netflix Smart Downloads would automatically delete the episodes you've watched and download the next episode of said TV series.