Available for everyone — assuming your (Android) phone is capable. 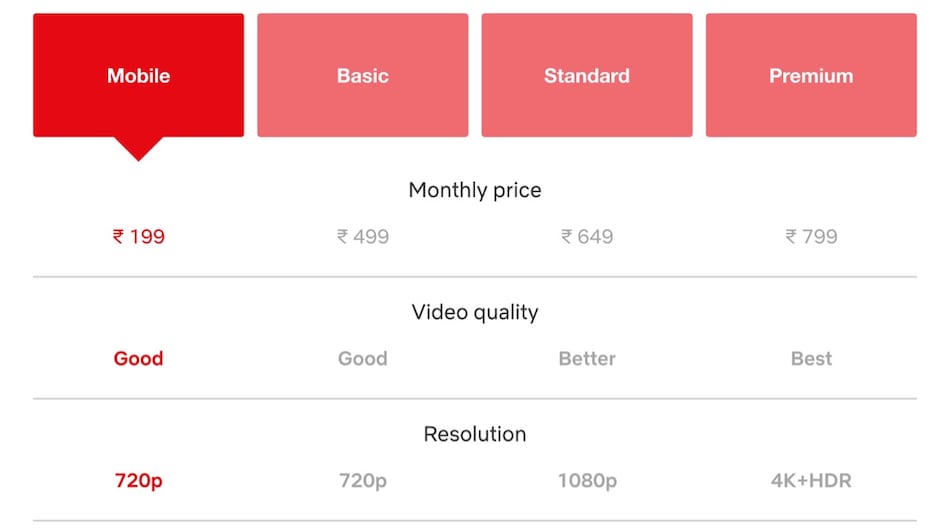 Have you noticed better quality on Netflix's two most affordable plans in India recently? Well, you've a new test to thank for that. Netflix has silently upgraded the Rs. 199 “mobile” and the Rs. 499 “basic” plans to high-definition (HD) video quality in India. For the geeks out there, that means 720p. Both plans were earlier limited to standard-definition (SD) quality at 480p. That's still true for all other markets worldwide. (The only other plan — the Rs. 649 “standard” one, which currently offers full-HD at 1080p — capable of a video quality upgrade remains unchanged.) Netflix told Gadgets 360 that the better video quality option has been available since early February in India.

Gadgets 360 has asked Netflix if the test is being run in other mobile-plan markets as well, such as Malaysia and Indonesia. We will update this piece if we hear back.

In a prepared statement, a Netflix spokesperson added: “We are always looking for ways in which to make the Netflix experience more immersive and enjoyable for our members. At the moment, this is a test, and might not be rolled out widely.” Netflix's decision to offer higher quality video is likely driven by the intense competition in the streaming space in India. Most other players, including Hotstar and Amazon Prime Video, don't restrict video quality across different plans. For Netflix, a test could also act as an upsell, with viewers getting used to HD quality more likely to fork out for more expensive plans if it's “not rolled out widely”.

At the same time, it's worth pointing out that not everyone can make the most of this new upgrade. Though nearly every smartphone out there now has a HD-capable display, most basic Android devices aren't actually capable of playing HD content on Netflix due to certification troubles. Why is that? This is going to get a bit technical. Google's Widevine DRM platform helps protect content as it's streamed, essentially to wade off piracy. But only those on Widevine Level 1 (L1) are allowed to play HD video. Low-end phones on Widevine Level 3 (L3) can't. The funny thing is that manufacturers don't have to pay more for L1, so it's not clear why they don't aim for the higher level.

For what it's worth, Netflix maintains a list of Android phones capable of HD playback, if you want to look up your device.