Netflix CEO Reed Hastings Talks Data Caps, and How He Wants to Make Buffering a Relic 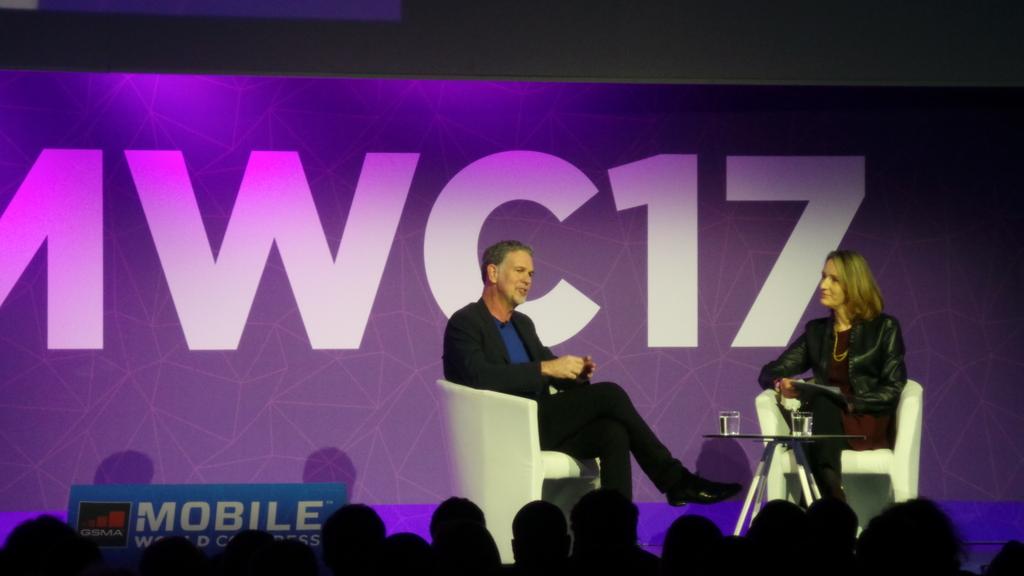 Netflix is working with mobile operators around the world to work on concepts of unlimited data, and lower bandwidth usage, founder and CEO Reed Hastings said at MWC 2017 in Barcelona on Monday. His comments seemed to safely skirt around the idea of ‘zero-rating’, which is a highly controversial practice as it gives Internet providers significant advantages, against the idea of net neutrality.

“What we are going to see is that a number of companies are pioneering new ways of offering services to the consumers, where it’s unlimited data, say limited to 1-megabit speeds,” Hastings said. “And that turns out to be very efficient on the networks, so an operator can offer unlimited viewing.”

For its part, he added, Netflix has invested in servers, interconnects, and codecs, something Netflix CPO Neil Hunt talked about at length with Gadgets 360 last year. Hastings said that you can get “incredible picture quality” at 500kbps on the Netflix app. In some cases, it is even down to 300kbps, he claimed, and hope to hit 200kbps one day.

Hastings spoke about how eliminating buffering is one of their biggest aims. “Some of you are old enough to remember dial-up Internet,” he said, imitating the sounds the devices of old made. “And then, the modems would connect. Now that seems like such a relic. Well, that’s what we want to make buffering.” He added that people in the future will wonder how we lived with the pain of buffering. Hastings believes that all the video you view will be via the Internet, in a decade or two from now.

At the same time, Netflix is also working with smartphone manufactures to get their HDR catalogue on mobile devices, starting with the LG G6. And even though some may not be in favour of mobile-oriented viewing – Hastings noted how The Crown creator Peter Morgan was aghast after learning the Netflix CEO himself watched the show on a phone screen – Hastings thinks the mobile screens of today are “just stunning”.

For Netflix, Hastings added, it’s about giving subscribers the choice of how they wish to consume said content. He didn’t rule out the prospect of vertical video, saying they might look at it “someday”.

Hastings also provided his views on the topic of binge-watching, whose rise people associate most closely with Netflix. Binge-watching is how TV should have always been, Hastings said. He compared it to reading a book, which according to him was the original binge-viewing experience. Hastings believes most linear networks will convert to binge-viewing formats in the future.

The problem there, naturally, is how advertising works for networks. Moreover, shows that air weekly spend more time as part of the Internet culture, since audiences are likely to build an appointment around the shows they love, such as how Game of Thrones dominates the Monday after, during the season run.

Produced by a French company: Gaumont Television, shot in Colombia, starring Brazilian actors, and available to viewers in half-Spanish, half-English, Hastings sees Narcos as the ultimate expression of their global identity. The fact that it’s viewed in all parts of the globe is further proof for him.

"We realised that’s the story of the Internet, […] connecting people everywhere,” he added. “And the role that we play in it is around stories of all types. And the surprising thing is just how much there is to go.”

The Sylvester Stallone-produced Ultimate Beastmaster, shoots country-specific versions for the US, Brazil, South Korea, Mexico, Germany, and Japan. For Hastings, the most interesting thing is the user engagement.

“It’s just so exciting to see all the commentary, because we can follow their Twitter and Facebook comments, around the world, as people engage with these characters,” he remarked. The fact that they are able to make most of their content available simultaneously around the world is “very satisfying” for Netflix.

Towards the end of the MWC keynote, upon being repeatedly asked how he imagined the world of entertainment more than 20 years from now, Hastings said we’d be looking at “serious AI”, aside from contemplating the future of humanity, and whether that involves augmenting our bodies.

Moto G5 Plus India Launch, Airtel Free Roaming, Paytm’s 200 Million Users, and More: Your 360 Daily
Twitch Will Sell PC Games and Pay You for It