‘My side of the family is like Mughlai Biryani. Your side, Khichdi, at best.’ 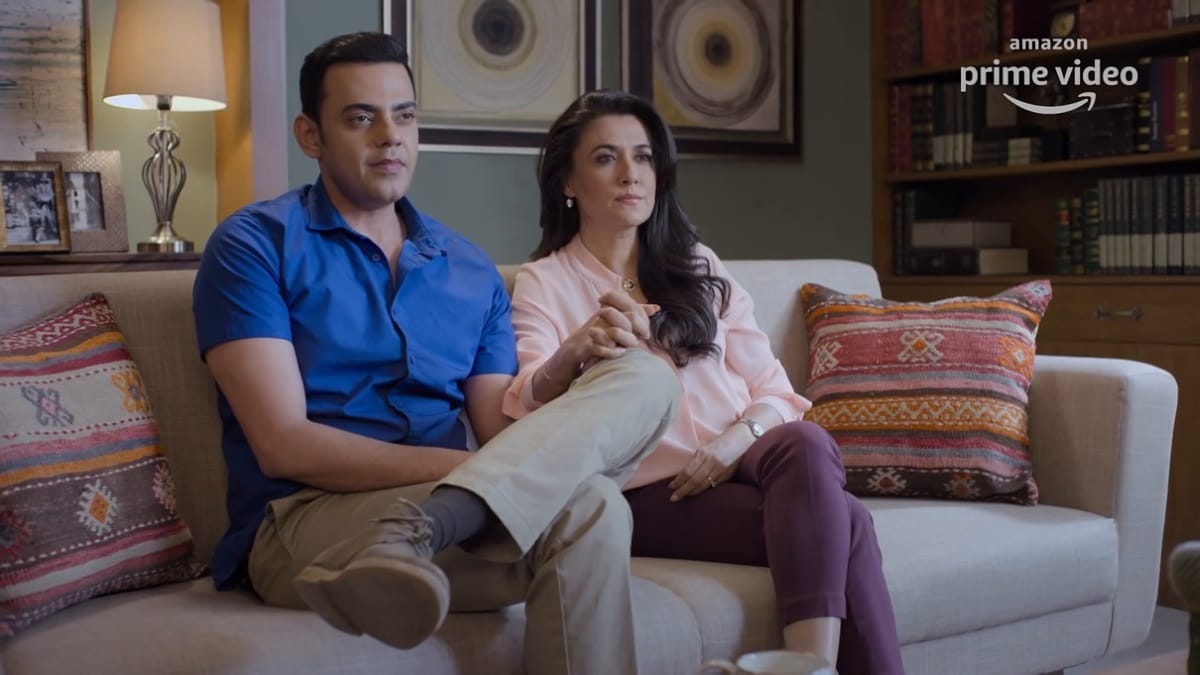 Cyrus Sahukar as Rishabh, Mini Mathur as Shefali in Mind the Malhotras

Just as it promised, Amazon Prime Video has released the trailer for its next Indian original series, Mind the Malhotras, which centres on a ‘modern, suburban married' couple, Shefali (Mini Mathur) and Rishabh Malhotra (Cyrus Sahukar), who are working on their marriage while trying to balance their family life. The two-and-a-half-minute trailer expands on that, showcasing the problems revolving around their sex life, their struggles in raising their three children, and the dynamic they have with their respective in-laws and relatives. Produced by Dia Mirza, Mind the Malhotras is an adaptation of the Israeli series La Famiglia, which has aired three seasons in the Middle East.

The Mind the Malhotras trailer opens with Shefali completely rejecting the idea of “chilling” with her mother-in-law, which naturally shocks Rishabh. It then sets up the premise of the series, with the couple opting for therapy after another couple friend of theirs files for divorce, concerned for how it will affect their own relationship. It then gives us a look at the types of issues the two have with their kids, from Shefali annoyed with the youngest Yohan (Jason D'Souza) for bunking school, Rishabh struggling to bring up the topic of sex education with the middle child Jia (Anandita Pagnis), and their eldest Dia (Nikki Sharma) not wanting to introduce her boyfriend to her parents.

Mirza has produced the show through her banner Born Free Entertainment, along with Sameer Nair and Deepak Segal of Applause Entertainment, the content studio arm of the Aditya Birla Group. Mind the Malhotras continues Applause's pattern of making Indian adaptations of international TV series, after the remake of the British series Criminal Justice, starring Vikrant Massey and Pankaj Tripathi, on Hotstar, and the upcoming remake of Israeli series Hostages with Ronit Roy and Tisca Chopra, also for Hotstar.

“We are delighted to present our first sitcom, Mind the Malhotras,” Amazon Prime Video India's director and head of content, Vijay Subramaniam, said in a prepared statement. “The show is a fun take on the everyday lives of a modern, upwardly mobile, suburban Indian couple. Packed with relatable moments and laugh-out-loud humour, we believe that the show will be loved by audiences across the country. We have received great appreciation from our customers for our comedy offering and are excited to continue building on it with this series.”

“Sitcoms in India make for a great family watch and we are happy to adapt this Armoza Formats show and present a new story with fresh, relatable characters,” Applause Entertainment CEO Sameer Nair said. “The story arcs borrow from real life, and I am sure viewers will find moments and conversations that mirror their lives. At Applause, we strive to develop rich and premium content that will delight audiences. We hope that viewers will enjoy what we have in-store for them with this new Amazon Original Series.”

Here's the official synopsis for Mind the Malhotras via Amazon Prime Video:

“When yet another married couple within their friend circle files for divorce, Rishabh and Shefali Malhotra fear that their marriage too may just be a ticking time bomb waiting to explode. They decide to seek professional help from a puzzling therapist who dredges up the most embarrassing and bizarre moments in the Malhotras' family life ranging from the quality of their sex life, the quirks of their three kids to the antics of Rishabh's annoying mother. Mind the Malhotras is a quirky take on the everyday problems of an ordinary yet oddball family which will be relevant to all and every age group.”