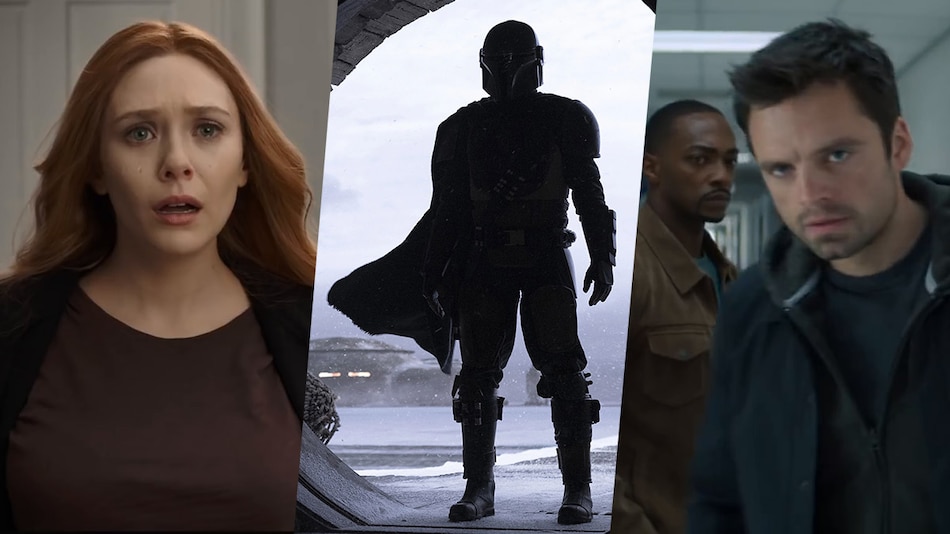 (L-R): WandaVision, The Mandalorian, The Falcon and the Winter Soldier

Disney+ has set release dates for three upcoming Marvel and Star Wars series: The Falcon and the Winter Soldier will premiere in August, followed by The Mandalorian season 2 in October, and WandaVision in December. Disney CEO Bob Iger made the announcements on the company's quarterly earnings call on Tuesday. Iger also teased the potential of spin-offs for The Mandalorian, and confirmed that characters from the aforementioned Marvel shows will show up in Marvel Cinematic Universe movies down the line, which Marvel Studios president Kevin Feige had talked about earlier.

The Falcon and the Winter Soldier follows the two (Anthony Mackie and Sebastian Stan) dealing with the Captain America mantle and the returning threat of Helmut Zemo (Daniel Brühl), who framed the Winter Soldier for a terrorist attack in Captain America: Civil War. WandaVision, featuring the Scarlet Witch (Elizabeth Olsen) and Vision (Paul Bettany), will be partly set in the 1950s and tie into Doctor Strange in the Multiverse of Madness. That leaves The Mandalorian, which needs no introduction at this point — it's the Star Wars show with Baby Yoda. It stars Pedro Pascal in the lead, hidden behind a helmet.

“The Falcon and the Winter Soldier […] will premiere on the service in August and WandaVision […] will debut in December,” Iger said. “These same characters and actors from the Marvel Cinematic Universe along with events from these new shows will factor into future Marvel films as we integrate storytelling across these platforms, all under the Marvel Studio banner.”

Iger added later: “The priority in the next few years is television with The Mandalorian season 2 coming in October and then more coming from The Mandalorian thereafter, including the possibility of infusing it with more characters and the possibility of taking those characters in their own direction in terms of series. And then, we have a prequel to Rogue One and an Obi-Wan series also in development.”

In India, The Falcon and the Winter Soldier, WandaVision, and The Mandalorian season 2 will release on Disney+ Hotstar.