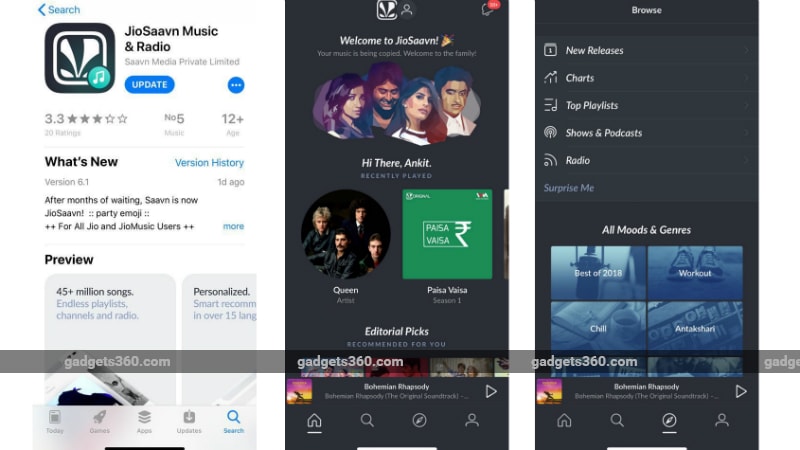 JioSaavn is now the new name for Saavn on iOS, and Jio Music on Android

JioSaavn app was announced by Reliance Jio on Tuesday, a day after it was spotted on the App Store. The app is the result of Reliance Industries acquisition of Saavn in March 2018, when it acquired a majority stake in the company. The app's launch is in fact a rebranding, but for now, things are a bit mixed up. On the App Store (for iOS), the Saavn app has been rebranded to JioSaavn, while on Google Play (for Android), the Jio Music app has been rebranded to Android. Notably, the changelog of the Jio Music app for iOS notes that it will be rebranded to JioSaavn soon, following an update. The JioSaavn merger brings with it a rebranded icon and name, however most design elements and features of the app itself remain similar to those offered previously. All Jio network users will be offered 90 days complimentary access to the premium JioSaavn Pro subscription.

To recall, Reliance Jio had announced in March that the combined entity (Jio Music and Saavn) would have a combined value of $1 billion (roughly Rs. 7,025 crores) that includes an ‘implied valuation' of $670 million (about Rs. 4,700 crores) for Jio Music alone. As part of the deal, Jio was reported to take a stake in Saavn for $104 million (around Rs. 730 crores) with the three co-founders keeping their leadership posts. At the announcement, Jio had announced that it had plans to invest $100 million (roughly Rs. 702 crores) in the joint entity.

Notably, this move comes at a time when media reports suggest that music streaming Spotify is gearing up for an official India launch in the next few months. Spotify is the largest paid music streaming service globally, but is largely restricted to only three regions - North America, Europe, and Latin America.

As per the changelog shared in version 6.1 of the JioSaavn app on Apple's App Store, the app remains free for all Jio users. Additionally, Jio Music users can access their individual playlists and downloads on the new app. A 90-day free JioSaavn Pro membership is also available for all Jio prepaid and postpaid subscribers.

For existing Saavn users on iOS, the design of the app largely remains the same, albeit with a new JioSaavn branding. The company claims that it has a library of over 45 million tracks, some of which are exclusive to the platform. “So suffice it to say, with Jio as our partner, you'll be getting the same app you know and love, with way more firepower and music than ever before. And there are a ton of great new features and improvements right around the corner, so stay tuned!” noted the music streaming company in the changelog. The app has a file size of about 79MB and requires iPhone, iPad, or iPod touch running iOS 8.0 and above.

As we mentioned, Jio Music listing on the App Store says that it will soon be rebranded to JioSaavn "very soon". It also adds "This update will ensure all your favourites, downloads and playlists are moved seamlessly into JioSaavn."

On Google, the reverse appears to have occurred. Saavn app on Android (version 6.0.6) has not received the new branding and logo yet. However, Saavn on Twitter points out that JioSaavn for Android can be expected "soon". Jio Music for Android on the other hand has been rebranded to JioSaavn. The same 90-day complimentary access to JioSaavn Pro is available for Jio users.