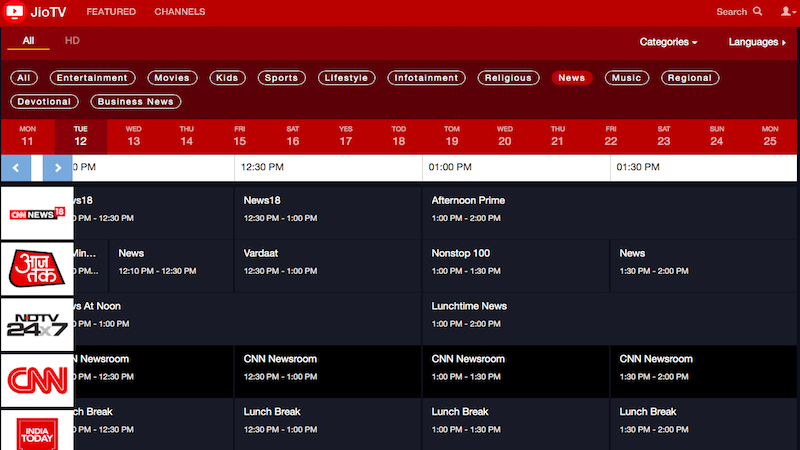 JioTV was available via the Web on Monday, but it seems to have been pulled down since then

Without much fanfare, Reliance Jio has launched a Web version of its JioTV live streaming service. JioTV now joins the ranks of JioCinema to become Jio's second service to have a Web version. It allows Jio users to view live TV via a Web browser.

Update, 19 December: It seems Jio has pulled down the Web version of JioTV for now, as the website now sports an "Under Construction" sign.

To access the Web version of JioTV and JioCinema by visiting jiotv.com and www.jiocinema.com respectively. The interface of both browser versions appears similar to the apps, available on both Android and iOS. The JioTV website, first spotted by TelecomTalk, shows all TV channel categories, including Entertainment, Movies, News, and Sports. There is also an option to filter out HD channels from their regular SD counterparts. The Web version of JioTV even offers the option to filter out channels in your preferred regional language.The Catch-Up TV feature is also present, allowing users to see content for the past seven days.

To use JioTV or JioCinema on the Web, you need to login on the respective websites with a valid Jio ID and password. Unlike the app versions, you do not need to be on a Jio mobile network in order to access the Web version. This move is expected to pave the way for users to view their favourite channels even when connected to Wi-Fi or other mobile networks.

A major factor behind releasing the Web version for JioTV could be live sports. Partners like Hotstar get a definite boost from users who prefer to stream live sports on the Web. Jio subscribers will now have the option to view their favourite channels on bigger screens.

JioCinema, on the other hand, offers users with an option to enjoy from any of the listed movies on their PCs and laptops.

Reliance Jio's JioTV currently does not have dedicated app support for Amazon Fire TV Stick, Google Chromecast, or Apple TV. The JioTV iOS app got a facelift on the iPhone and iPad, in June this year.