The 10-episode season 1 is in production right now. 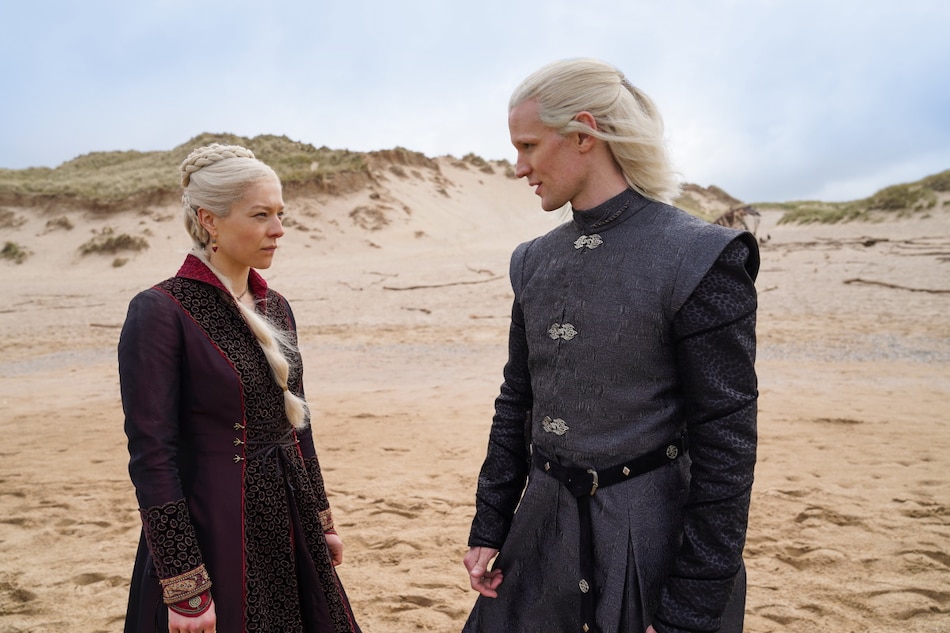 House of the Dragon — the upcoming Game of Thrones prequel TV series — has gotten a first look. On Wednesday, HBO unveiled three first look images featuring five House of the Dragon lead cast members. We have Matt Smith as Prince Daemon Targaryen, Emma D'Arcy as Princess Rhaenyra Targaryen, Steve Toussaint as Lord Corlys “The Sea Snake” Velaryon, Olivia Cooke as Alicent Hightower, and Rhys Ifans as Otto Hightower. House of the Dragon is currently in production and expected to air in 2022 on HBO and HBO Max in the US, and on Disney+ Hotstar in India.

The three House of the Dragon first look images come on the back of multiple leaks from the sets of the Game of Thrones prequel, that began production late April in England. HBO has seemingly decided that it would rather Thrones fans look at the real thing, instead of chasing around low-quality leaked photos and videos. As such, we now have a proper look at House of the Dragon's lead characters, from the Targaryen, Hightower, and Velaryon houses.

Rhaenyra (D'Arcy) is King Viserys' “first-born child. She is of pure Valyrian blood, and she is a dragonrider. Many would say that Rhaenyra was born with everything…but she was not born a man.” Daemon (Smith) is Viserys' “younger brother and heir to the throne, a peerless warrior and a dragonrider who possesses the true blood of the dragon.” That's the first two above.

The Sea Snake (Toussaint) is the “most famed nautical adventurer in the history of Westeros. He built his house into a powerful seat that is even richer than the Lannisters and that claims the largest navy in the world.”

Otto (Ifans) is the “Hand of the King, who loyally and faithfully serves both his king and his realm. As the Hand sees it, the greatest threat to the realm is the king's brother, Daemon, and his position as heir to the throne.” Alicent (Cooke) is the “daughter of Otto Hightower and the most comely woman in the Seven Kingdoms. She was raised in the Red Keep, close to the king and his innermost circle; she possesses both a courtly grace and a keen political acumen.”

Condal serves as co-showrunner alongside Game of Thrones veteran Miguel Sapochnik who will direct the House of the Dragon pilot and additional episodes. Greg Yaitanes (House), Clare Kilner (The Alienist), and Geeta V. Patel (Meet the Patels) will also direct episodes. Martin, Condal, and Sapochnik also serve as executive producers on House of the Dragon alongside writer Sara Lee Hess (House), Vince Gerardis (Game of Thrones), and Ron Schmidt (Watchmen). Yaitanes is a co-executive producer.

House of the Dragon will be the first Game of Thrones prequel when it arrives in 2022.