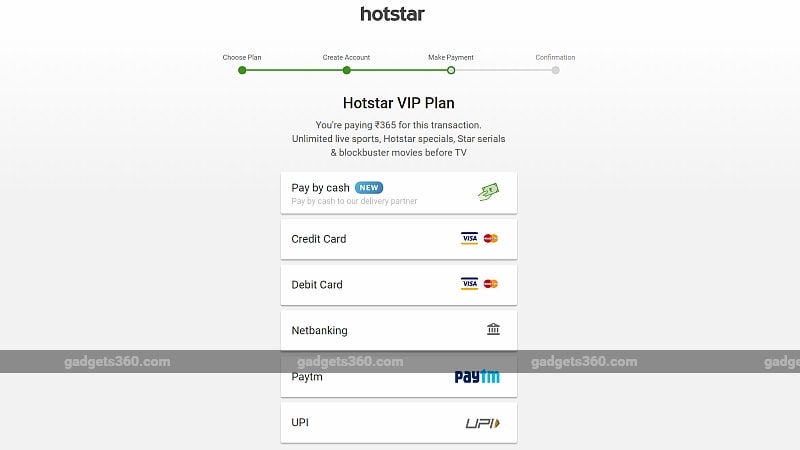 Hotstar VIP has been launched in India to offer premium content to viewers at an as affordable annual charge as Rs. 365. The new plan comes alongside the existing annual and monthly packages. However, unlike the original packages, the Hotstar VIP subscription is limited to content under the Hotstar Specials label, Star network serials, and live sporting action. The content under the Hotstar VIP subscription can also be watched on any supported device, including mobile, computer, and TV. Hotstar has also launched a new 'Pay by cash' payment option that is exclusive for subscribers purchasing Hotstar VIP.

Competing against Amazon Prime Video and Netflix, Hotstar is offering Hotstar Specials, episodes from Star network serials before their television broadcast at 6am, and live sports telecasts such as Vivo IPL, ICC Cricket World Cup, Formula 1, and Premier League among others under Hotstar VIP. All this comes at Rs. 365 a year, which translates to Re. 1 per day.

Subscribers picking up the Hotstar VIP model are also entitled to avail the option to download content for offline viewing. However, it doesn't bring access to all American and International shows and movies. This means you can't expect Game of Thrones, Friends, or The Flash after purchasing the Hotstar VIP subscription.

Hotstar All Annual Sports plan subscribers will automatically be upgraded to Hotstar VIP at no additional charge. Similarly, Hotstar Premium subscribers are entitled to receive the benefits of the new VIP package alongside access to American/ International shows and movies.

To ease the subscription process for the masses in India, Hotstar has also brought the Pay by cash option. It is designed to collect subscription charges from the doorstep of subscribers once they confirm to start Hotstar VIP membership. Hotstar is also letting subscribers pay for the new plan using credit or debit cards, netbanking, Paytm, or through UPI.