Hotstar Launches Its Premium Service in US and Canada 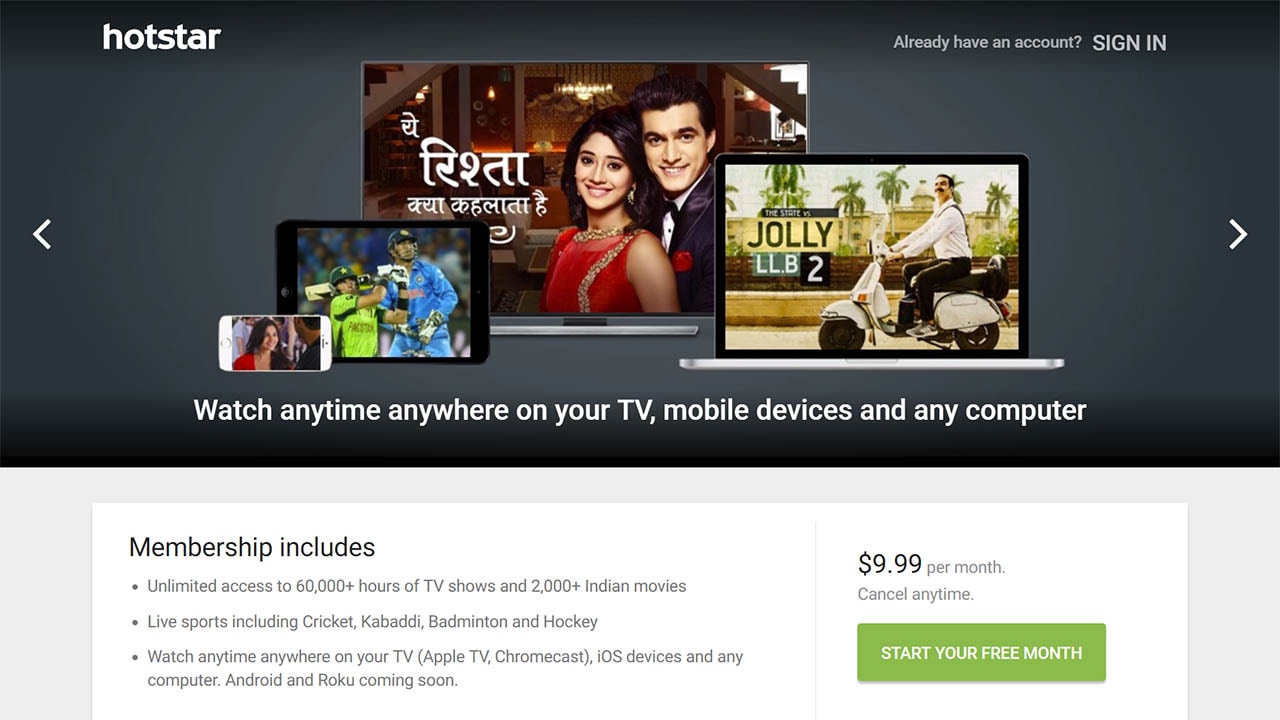 Hotstar is changing the way it operates internationally. The Star India-owned streaming service is extending its Premium subscription to countries outside India – $9.99 (roughly Rs. 640) per month in the US, and CAD 12.99 (roughly Rs. 670) in Canada with a one-month free trial – via apps on the country's respective iOS App Stores and Google Play stores. Apps for Android TV and Roku are "coming soon", according to the Hotstar website.

At the same time, Hotstar has gone dark in other parts of the globe. Earlier, you could access Hotstar from any region, although it was officially available only in India. As of Monday, it's available in just three countries – India, the US, and Canada – with the latter two accessible via us.hotstar.com, and ca.hotstar.com. Gadgets 360 has reached out to Hotstar India for comment on this new strategy, and we will update this story if and when the company responds.

Of course, the size of the content library will also differ in the new countries of availability, given regional restrictions and licensing deals. For example, most of Hotstar's third-party content from international providers on both TV/ film – HBO, Fox, Disney, and Showtime – and sports – Premier League, Bundesliga, F1, and Wimbledon – is unavailable in US and Canada as competitors already have deals in place. Gadgets 360 was able to verify this by visiting the respective country-specific sites.

The appeal and strength of Hotstar lies in its India-centric approach, consisting of multi-lingual programming from Star India's bouquet of channels such as Star Plus, Star Jalsha, and Asianet; Indian movies either produced by Fox Star (Jolly LLB) or those it has international licenses for (Singham Returns); and its own originals, such as On Air with AIB, Sarabhai vs Sarabhai Take 2, and Hotstar CinePlay.

On the sports side, Hotstar is promising live content in the realm of cricket, kabaddi, badminton and hockey, thanks to the deals it has in place for Asia Cup, Karnataka Premier League, Pro Kabbadi League, Premier Badminton League, and Hockey India League.  Hotstar's FAQ says that it offers over 60,000 hours of TV, and more than 2,000 Indian movies, along with live sports.

Interestingly, although Hostar India only allows one stream at a time, international subscribers will be able to play two videos simultaneously. Also, it's worth pointing out that the Hotstar FAQ mentions that the membership is not transferrable between the countries Hotstar is available in, so US Hotstar users are entitled to watch videos in the US only. Similarly, an Indian user in the US will not be able access any content either. This is not the case with either Netflix, or Amazon Prime Video.